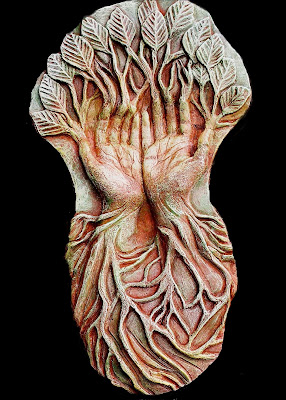 My introduction to Earth Spirituality and Earth Mysteries was Sig Lonegren, who I met, completely by accident, at the NEARA conference in Putney, Vermont in 1982.  Sig assumed I was with his class, and I assumed I was invited to join the friendly group I blundered into when I went to the Putney Inn for a cup of coffee......and the next thing I knew, I was at an ancient monolith site hidden on Putney Mountain, and learning to dowse for ley lines. I find his weekly articles fascinating, although I suppose this is pretty obscure for those who aren't familiar with dowsing and geomancy.  But I felt like copying his article here because  of my long interest in these ancient sites, and also because I can attest to having experienced, and located with many others, the energetic phenomenon of  leys and ley crossings - and I've also taught ley dowsing to people who found them without even "believing"  in them.

As I write this, I am in the Netherlands, east of Amsterdam in an area called "Het Gooi"  (pronounced: the 'G' in "Gooi" is pronounced like the 'ch" in the Scottish word 'loch', the 'oo' like the 'oa' on 'oat.').  It consists of a number of towns that are essentially suburbs of Amsterdam.  Among them are Bussum, Laren and Hilversum.  These three towns surround a large bit of moorland - the "Bussumerheide" and the "Westerheide" (in pink on the map below).

These moorlands have a number of perfectly straight prehistoric lines/paths that converge at St. Jan's Kerkhof (St. John's Cemetery).  Straight lines that converge like spokes on a wheel at a sacred site.  Humm… that sounds familiar.  Actually on the map below, I have hi-lighted six lines that converge on that cemetery that have energy leys ( six to eight foot straight beams of and energy that have a direction of flow) running along them.

These lines are called "doodwegen."  One line is a "doodweg" (pronounce the "o" in 'dood' as in 'oat', 'we' as in 'vet", and the 'g' as the 'ch' in 'loch.'  In English, "Doodweg" is "dead way or path," In the past, the dead were carried along these paths from their home towns to the cemetery at what is now St John's Church Cemetery.  There are many Bronze Age round barrows in that area.  (There is a similar dead way at the Rösaring northwest of Stockholm in Sweden where there is a dead straight path leading from a charnel house to a series of round barrows and a fifteen circuit labyrinth.)

Niewe Crailosweg (hi-lighted in green) runs diagonally, and is much younger
I walked the Bussumer Doodweg, and while there are slight deviations due to the thousands of years that they have been used not only for spiritual purposes, but now for walking, horse-riding and and bicycle paths, it is an essentially dead straight line from St. John's Cemetery to Bussum.
Three pictures of the Bussumer Doodweg.   In the bottom picture, you can see two horseback riding trails running parallel  with the foot/bicycle path.

While I was walking the Bussumer doodweg, I was reminded of Kubler-Ross' book on Death and Dying, and the straight path one takes from this life to the next.  When Terry Ross (no relation) taught me how to assist lost spirits to the other side, he described the same straight path, "Don't look to the left or the right; keep going straight ahead; do you see the light at the end of the tunnel?; go for it!"  These Doodwegen are portals, paths to the other side.

There is one very straight line running diagonally near the top of the map (in green) called the "Nieuwe Crailoseweg" that is a much more recent "weg," but its first bit, "Nieuwe" shows us that it is much more recent than the "Doodwegen."  While it doesn't go to the St. John's Church, it does seem to be carrying on the tradition of straightness.
A painfully obvious connection between the Dod Man in England and "Doodwegen" in the Netherlands struck me that I had, for some unexplainable reason, never thought of before.  Back in the seventies, when Paul Devereaux was Editor of The Ley Hunter, there was a comic strip in most issues called "Dodman."  'Dod' is a local British vernacular word for a land snail, the "Helix pomatia".  The comic strip was the story of a snail that had long antennae, and ongoing adventures in sacred space.  This snail was a caricature based on the Dodman, best known as the chalk hill-figure known as the Long Man of Wilmington.    According to Wikipedia, "the 'inventor' of ley lines, Alfred Watkins, thought that in the words "dodman" and the builder's "hod" there was a survival of an ancient British term for a surveyor. Watkins felt that the name came about because the snail's two horns resembled a surveyor's two surveying rods."

IMHO, at a time when leys are under attack, these doodwegen are some of the best bits of evidence that these spirit paths are real!

Love this post. Ley lines are fascinating and I like this man's take on them, the analogy he draws to Kubler Ross's book.

'They' say that cats and Elderberry Trees favour ley lines I wonder if there is any truth to that matter. I like to think its true Great read as usual ...thanks for posting

hmm........thanks Cheryl, I'll have to check that out. All I remember about Elderberrys is Elderberry Wine, which has all kinds of medicinal values they say.