I recently was contacted by a woman developing a Divination site about a long, long abandoned project, my "Oracle deck".  I tried for years to get it published, to no avail.  Her encouragement resulted in my putting together  a Rainbow Bridge Blog with the cards, and I find myself having a lot of fun now writing about the images..........who knows, maybe one of these days they'll end up in a deck at last.  Just felt like sharing them here..........**


THE RAINBOW BRIDGE
Oracular Cards Inspired by the Tarot 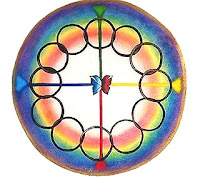 “You have noticed that everything an Indian does is in a circle, and that is because
the Power of the World always works in circles, and everything tries to be round.”
---Black Elk
The great Dakota seer and Medicine Man Black Elk  had a vision, when he was a young boy,  he later called "the Hoop of the Nations".  Although he saw the "hoop" of his  own Lakota people broken, he also forsaw a future time, symbolized by a great Circle of interlocking hoops, when many people,  from the world’s four directions,  would come  together  to form a "great hoop".  A world united.   Black Elk's vision has been called by some the "Rainbow Tribe".  The evolution of a global tribe is our greatest challenge and our highest hope.  The Rainbow, to me, represents the emerging global paradigm, which includes a multi-cultural vocabulary for the sacred.

As mystical traditions of East and West join with the teachings of indigenous shamans, Goddess ways, New Age, contemporary psychology, Quontum Physics and modern science, and the universal language of the arts, a RAINBOW BRIDGE is forming to unite humanity with each other, and with other dimensions of spirit.
The Rainbow Bridge is really an  Oracle Deck, although it was inspired by my many years of reading the Tarot.  In Tarot, the Higher Arcana is a progression through what mythologist Joseph Campbell called the "Hero’s Journey".  The first card in the traditional deck  is The Fool (Innocence) representing the openness with with we incarnate into this world.

The last card of the Journey is The World, the return Home.

**(and as I was manuvering these images through the still not understood mysteries of html, the "Contrary" card decided to end up at the top, and I can't seem to get it back in it's column unless I delete it.  Go figure.  Spider Woman's little "web" joke......)
13 Card Reading

THE CARDS  (some of them)

These are stunning! I would love to see them as a deck!

At first glance, I LOVE The World, Priestess, and Death/Rebirth - beautiful!

Hey, thanks. Maybe I'll finally get around to finishing this Tome someday....although the $8000.00 or so pricetag to publish is daunting. But I do find I want to write about them, finish the text........it's such a wonderful way to learn about what one believes to create a personal "Oracle" deck.

Beautiful cards, Lauren. I like your interpretation of abundance - the peacock is fabulous.

I am a little surprised that you haven't got a spider, or web, card. That is a very rich symbol.

Or even an eye, a hand, or a mask, which occur in some of your other imagery.

This was culled from almost 30 years of art work, most of which I've never exhibited. It all comes before my interest in masks or the Spider Woman story........but you're right, all of those symbols would make for a great card. Perhaps in the future..........

I keep coming back to this deck. I want one!

thanks for all information tarot.