A friend died almost exactly a year ago, and I remembered a poem that she bequeathed me.  We were collaborators during the 70's - I illustrated a collection of poems by her and others.  We  lost contact and reconnected again just 5 years ago when she had just been diagnosed with breast cancer. Felicia had tried to have a child for many years and could not, and I know that she felt the fertility drugs she took might have caused her disease.

For all those years before then, I carried around Felicia's poems, many of which I had illustrated - they became internalized in me, part of my inner language.  The one I share here is recent. 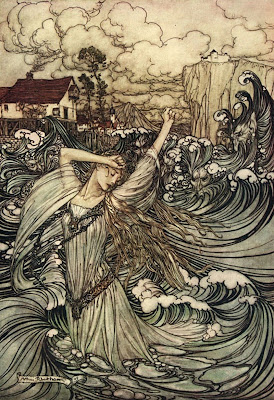 I've been thinking about the mythic mind, and archetypes we em-body (manifest) in our life stories unconsciously.  At the conference last week, a Jungian psychologist spoke about Jung's notion that the Archetypes have an independent existence;  they are collective intelligences that can manifest both within and through us. I know I often felt that sense when I worked with the Masks of the Goddess collection, particularly when aspected a Goddesses myself.   I don't know if I can explain that. What's "reasonable"?  Are we attracted to certain mythic beings and tales, identifying with them in the course of our lives, or are they already embedded within us, templates of who we already are and are continually becoming?  Is that too fanciful an idea? 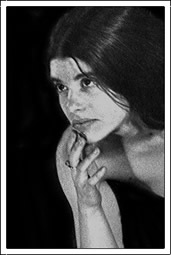 Felicia was a mermaid.   I never thought she was comfortable with this solid world.....she was too mutable a being.   I always seemed to meet her where there was water, and I remember well her sea shell necklaces.    She had an antique book illustrated by Arthur Rackham we used to pore over as young students, and 33 years later I was not surprised to hear passages from a book she was currently writing about a contemporary Ondine, a modern woman trying, unconsciously, to find her way back to the sea.  I am sad she never finished the book......it was beautiful.

There are many romantic stories and urban myths about artists who are discovered, their work living on, and that godawful  cliche I despise because idiotic people have said it to me so many times:  "you'll be famous when your're dead"......etc.   But I know well that there are so very many whose  work dies with them.  I know it only too well.

One thread of the Ondine (Undine) legend is that in order to gain a human soul,  Ondine (a mermaid  living in the depths of the Danube River) must marry a human and bear a child.  I first heard some of this when I was given the Danish "Little Mermaid" as a child.  (I also couldn't understand why someone who was immortal and at home in the elemental would want a human soul in the first place - being a mermaid seemed so much better.) But according to the legend, mermaids did leave their native element to pursue a human embodiment, usually with a lot of suffering on on their part.  And, like the Selkies*  of Ireland, the sea  always called to them (should a Selkie find her sealskin, the urge to return will become irresistible).

According to Wikipedia, Undines  have beautiful voices, which are sometimes heard within the water.  One of the most famous versions of the German story was Friedrich de la Motte Fouqué's novella Undine, which has also been staged as a ballet many times. 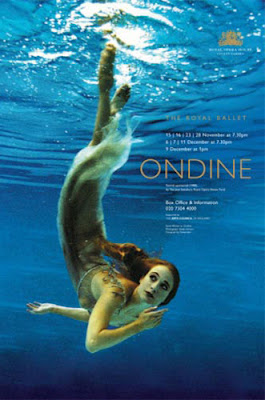 Cold water burns my hands,
I dip and turn the paddle shaft.
A few boats pattern the river ahead,
Where green canopy grays the light.

I am in alone in Undine's pool.
Water is a stranger here,
changing blue, gold, clear.
Drifting leaves under glass:
friendless, they swirl by.

" This way  See? Go there."
Foolish, she is frightened
by roots of upturned trees.
She flees too far, strays lost
into blind woods.

I reach and as I draw the blade,
My boat turns, and I look to see
Where glassy current
Shows the way:
a clear channel
and friends who wait below. 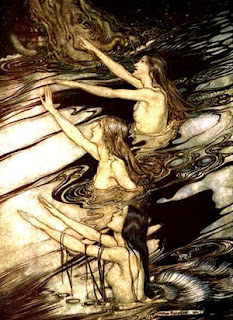 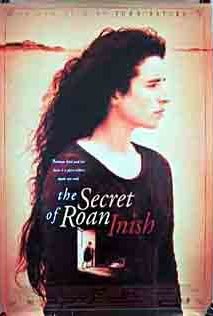 These illustrations are just stunning! I like your description of your friend, too, Lauren. A mermaid.

I've known some people who left when young who also felt somehow not totally part of this world. A beautiful poem and, I, too wish she had finished the book, it sounds enchanting.

What tribute to be remembered so fondly by a friend. Gail

Thanks again...........yes, I miss Felicia. Each person you've loved is a gem...there are days I just want to remember them.

What a beautiful way to re-member your friend.

I don't think I told you that I was looking at photos of your masks awhile back.... They are incredibly beautiful, and touched me in a way that made me cry.

Thanks so much for your kind comments.....since you are all artists yourselves, I know you realize that such appreciation keeps us going. Please know how grateful I am, and may (in the midst of this amazing cold snap!) warm the world with our creativity.

great tribute...for once I am lost for words