At the beginning of December, I wrote about synchronicities in the form of songs or phrases one can find oneself singing or thinking about, without any apparent reason for it.  Often they can be quite funny and ridiculously banal.  I had found myself singing (actually, I still am, darn it) a sixties song called "Lady Godiva" - and came to the conclusion that this unlikely song, lodged somewhere in the convoluted  recesses of my unconscious and choosing to erupt with annoying frequency had something to do with "Lady God" and "Deva" - the Goddess and the divine.


Since then, I've thought deeply about how I've been losing touch with my spiritual life.  I've been passionate about the healing of the collective human psyche by "the return of the Goddess" for pretty much the past 35 years.....and possibly before that, but I lacked the literacy to conceptualize these ideas.  I feel, the more I meditate on my "waking dream",  the Goddesses are drawing me back into the rejuvenating, healing landscape of mythic mind and mythic time.


I'm grateful to Robur, a cyberspace friend who is very knowledgeable about gardens, myth and magic, and writes two fascinating blogs that explore these themes : http://roburdamour.blogspot.com.  His comments about "Lady Godiva" revealed a lot I didn't know about the legend, and helped  to further inform meanings of  my own  "synchro" language.

Lady Godiva  rode through the streets of Coventry.   "Coventry" , I learned, is a fitting metaphor for "Lady God"'s ride, in that the dictionary defines the  word "Coventry" as:
Thus, "coventry" is the opposite of "coven", "covenant", or "to convene", which means to bring together.....a fitting term for what happened in the course of the Church and the Middle Ages to the former Goddess as May Queen.  And although the contemporary dictionary meaning of "Coventry" has come to mean banishment,  perhaps a more ancient layer to understanding the origins of the town's original name also comes from Robur, who writes that


"The official etymology of Coventry is that it means Cofa's tree. A tree owned by Mr Cofa!  A very early spelling, 1050, is Couaentree.  I found, by chance, a reference to Coventry as bring a rebus for 'a coven round a tree'. Well, it is undeniably a rebus. But that doesn't mean anything conclusive.  There was a widespread practise for dancing round a tree on May Eve, which is the maypole. Perhaps there really was a tree, that was used for festivities."

"The story that Lady Godiva was protesting against taxes is untrue.  Apparently, at the time the procession dates from, Coventry was a village, and there were no taxes.  The procession is actually a May-Eve fertility procession, many of which are found across Europe. There is even one at Southam, just a few miles from Coventry, which is no longer celebrated.  What happened at Coventry, was that there was a Benedictine monastery there. The Christian monks did not approve of people watching the fertility procession, and so put some 'spin' on the procession, and invented this story about taxes. " 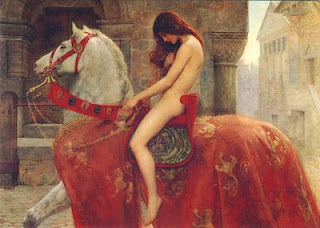 The 1966 pop song  by Peter and Gordon (lodged in my brain until further notice or I finally get it, apparently)  is about "Lady Godiva" becoming a porn star, thus trivializing the story of Lady's Godiva's ride and turning the Lady into a kind of prostitute -  which has so often been  done to the Goddess in the course of patriarchal mythology, and continues well into the present.
Last, and thanks once more to Robur's scholarship, I've also become fascinated with a bit of information he passed on  about another  "Godiva Procession" that occurred close to Coventry in a town called  Southam, in which, according to Robert Graves (The White Goddess) two figures, one black and one white, were carried, symbolizing Holda and Hel.  I was struck to imagine the May Queen, riding to the Maypole or World Tree, accompanied by effigies representing the Nordic/Germanic Goddess as  both Life and Death.

Holle is very much associated with Yule, and with the hearth and home, especially in the winter.  But she is known throughout northern Europe, an ancient goddess that predates the advent of Christianity. ** Also known as Holda or Hulda, and she is a  triple goddess,  embodying the passages of life.  In some myths, she is "the ash girl", her face half black with soot and half white.  This comes from a story of how in order to marry the God of Winter she had to come to him neither naked nor clothed, and neither in light or darkness.  As the Mother goddess, she protected the forest and was often shown among trees.  Holle in old age  is Winter's Queen, and Mother Holda is the source of  "Mother Goose"  legends, because the snow flies when the she shakes the feathers from her down bed.  In Holland, they still says that 'Dame Holle is shaking her bed'.


"Frau Holle, as she is known in Germany, was called The Queen of the Witches. The brothers Grimm tell a story of step-sisters who both go to visit Frau Holle in the 'nether realms'. They begin their journey to her by falling in a well............Holle's name is linguistically related to the word Halja, which means "covering", and is the ancient Teutonic name for Hel, the Norse land of the dead. Holle is sometimes called the Queen of the Dead, and resides in the 'nether' regions. She possibly lent her name to the country Holland, 'the land of Holle', which is also called the Netherlands because many parts of the country are below sea-level."
Sandra Kleinschmitt

So in this long journey to Lady Godiva's ride and a silly song playing mysteriously over and over in my mind,  I find at last my way to Goddess, to the May Queen, and to the netherworld of (wholly and holy) Holle as well, who is both light and dark, young and old, light and shadow.

And who is Hel, the ashy side of Holle's face?  Besides being the origin of the word people use daily as a swear word, and millions of Christians have a mighty fear of going to, without knowing anything about where the concept originated from?  People no longer remember that once "go to Hell" meant to die. 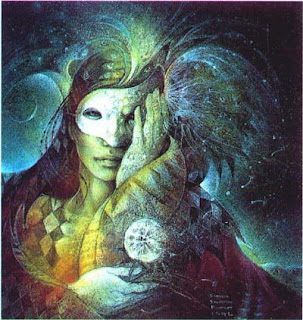 
I take the liberty of copying a wonderful description from Rowen Saille of the Order of the White Moon,

Her realm is named for her, Hel or Helheim. Because She accepts all to Helheim, she also becomes the judge to determine the fate of each soul in the afterlife. The evil dead are banished to a realm of icy cold (a fate that the Nordic people found much worse in telling than a lake of fire). Unlike the Judeo-Christian concept, Helheim also served as the shelter and gathering place of souls to be reincarnated. Hel watches over those who died peacefully of old age or illness. She cares for children and women who die in childbirth. She guides those souls who do not choose the path of war through the circle of death to rebirth." 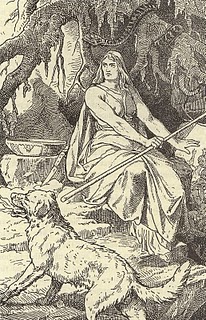 "Hel governs the world beyond that of the living. In magic, she makes thin the veil between worlds. Seidhr [SAY-theer] or Nordic shamans call upon Her protection and wear the helkappe, a magic mask, to render them invisible and enable them to pass through the gateway into the realm of death and spirit."

** For anyone who may wonder where the "flying broomsticks" of witches (or Harry Potter) comes from, Dame Holda may be the source.  Because of her association with the hearth and home, the Broom was both symbol and magical tool.  Folk traditions of "sweeping away evil from the hearth" are very ancient throughout Europe.

Labels: Hel, Holle, Lady Godiva, The Return of the Goddess

If you lacked the literacy in the past you are sure making up for it now. I check every day for your 'gift' and todays was worth the wait. You brighten my days! Thankyou and Happy New Year!!! Gail

Hey, thanks for the encouragement, Gail! This one owes a lot to Robur's scholarship, I must say. Happy New Year to you as well!

A thoughtful and enlightening post, combining
ideas and facts, both borrowed and found in an interesting way.

Fantastic Work . It is like food .. reading your cyber book....
Your Threads ... is like a magic book that enlivens and feeds the soul.