I've been given a fabulous old adobe house in Carrizozo, New Mexico, and a studio to pursue my residency here (until mid August). I wake in the morning with this kind of vista before me, watch the stars at night from a kind of platform in the back yard that, surely, was built for the purpose of getting a little closer to the vast skies of this landscape. Air is the element of New Mexico.

Air and Fire, here..........below are images from the "Valley of Fires", huge lava fields not far from here. I've found myself drawn there, more so than the mountains surrounding the Carrizozo valley (Capitan, Riudoso)...............there is a numinosity in that raw, primal black rock, so recently spewed forth from the fiery heart of Gaia. It fascinates me.

To be honest, as enthralled as I am with this amazing landscape, and this strange, charming town, I seem to be dealing with a depression I brought with me. Wherever you go, there you are. I hope this mood passes soon. There are many wonderful images in my mind, but I can't sometimes seem to get beyond the yammering of my personal demons. Maybe its worse that I've been given this wonderful opportunity, and they followed me here.......*** 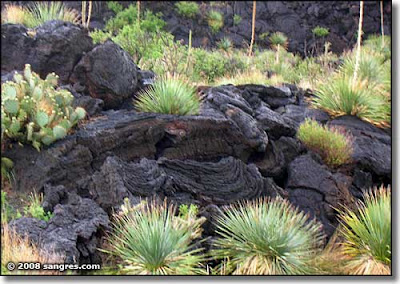 The Valley of Fires 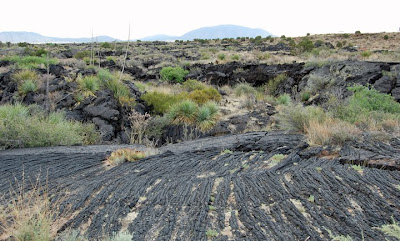 I also, in search of art supplies, blundered into Roswell, NM, right in the middle of the annual UFO Conference at the UFO Museum (yes, there is a UFO Museum), and wandered back to Carrizozo two days later. What a hoot! I found the speakers there fascinating, intelligent, and well informed - some of them were well known researchers who had dedicated many years of their lives to proving that UFO exist, and also that there had, indeed, been a crash of an extraterrestrial craft outside of Corona, NM, in 1947, which was covered up by the U.S. military. Their arguments impressed me.

But the most fascinating presentation there was by Freddy Silva on sacred sites and crop circles. More on this later...................

***
It goes something like this: does anyone really give a damn? What's the point of churning out more stuff that will end up in a storage locker? If I'm really lucky, I'll sell a few prints that will pay for a show I may have. When I leave here, I may be able to get a few friends to stop talking about their money or health problems long enough to look at my latest collection for about 15 minutes, although half way through the presentation someone will invariably start talking about how it reminds them of their aunt Susie's macrame pottery project, and I'll get mad without saying anything, and quietly close the book, or the portfolio, or I'll turn off the laptop. No one will have noticed that I did. I won't attempt to share it again.

And then back in the studio, more loneliness, more contemplation of my artistic navel, more increasingly trying to justify my life at 60. More well meaning observers occasionally telling me that "you do it for yourself" (No, you don't. You do it to communicate. That's another way that art, and artists, and creativity in general, is trivialized in our materialistic world.) Or that "artists are visionaries" (Another way to say they think you're a lunatic.)

Or, "You'll be famous when you're dead". (Gee, now that is an incentive. How nice to think that art investors will make a killing after I'm dead. And......that has to be the most rediculous, ever re-occuring comment I hear. Do you really want a life like Vincent Van Gogh? Hell no. I'd much rather be a bartender in Florida.)

And then there is the all-American comment, "So, what's your real job?". We won't even go there.

Ok, well, I guess I had to get that out of my system. Infantile, I know. But honestly, I took this residency with a tinge of desperation, hoping to somehow re-kindle the passion I once had, a passion for art that has propelled me forward for 30 years. If after this generous residency it hasn't returned, if I can't find a way to feel less isolated and increasingly disillusioned.........then I guess it's time to do something else. I just wish I knew what it was.
Posted by Lauren Raine at 10:58 AM

I hear you, Lauren... and your work is extraordinary... I do hope you won't give it up.... but I certainly understand the need to feel supported by the universe for the effort and energy one puts out, may it be so.

I think I make art to give voice to something non-verbal within me that needs to celebrate the land, to pollinate the world with beauty, to enchant, to inspire, and, maybe most importantly, to let my soul speak to me. Oh... and so much more....

And there are intense moments when the soul-path of being an artist and struggling economically makes me want to give it all up and get a full-time soul-sucking job... but then not really.

May joy and inspiration find you... abundant blessings,
Valerianna

Wow, this is gorgeous country. Has it enriched your art? Is your muse available 24/7??

dear lauren - oh, your post certainly touches my own heart in more ways than one - first, whenever i hear of new mexico in particular [and/or any other part of the southwest], i am immediately homesick as if a part of my own spirit remains there from my childhood and/or another life somehow - i truly miss it - and i so relate to your spiritual/artistic quest about which you speak so openly - you may have seen me walking that same path beside you? :)

perhaps knowing that others walk the trail with you, beside you, will add some degree of comfort - at least i hope so -

I teach high school history at an art school. I sometimes tease the visual artist that they aren't 'tortured' enough to produce from the soul yet. I will be more discerning in my appraisal in the future. As a nonartist who has never experienced life deep enough to feel what you feel I think I envy you.

I want to thank you for your kind comments.........I feel a bit embarroused at letting my "psychic underwear" hang out in this way. The truth is held, I think more clearly, by what Valerianna says herein....art process in its highest function is a spiritual practice. A way to "pollinate", to focus, to center, to understand in ways that are not verbal.

Having said that, I also think that we can have all kinds of ambiguity about our lives, and purpose........that has to be ok sometimes.....