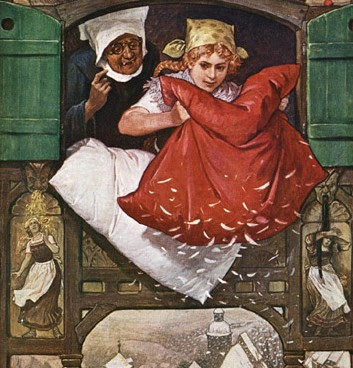 I've been having a mythological ramble through Yule traditions, and thought I'd jot a bit of it down here. As Joseph Campbell pointed out, to understand the evolution of myth is to understand many things, including the evolution of language and religion.  One of my images that I keep creating lately is "dual" masks, masks that are half black and half white, or half "underground" and half "above ground vegetation".  I think this reflects my sense of how very important holistic consciousness is, personally and collectively, whether we speak of shadow work, coming to terms with the ebbs and flows of self, or the cycles of our Mother Earth, the ebbs and flows of the seasons and the creation/death/rebirth cycle.  To try to live within the Whole.  Or at least, come to terms with it!

One of the  Goddesses that reflects this time, and the idea of the flux of cycles, is the Nordic Goddess Frau Holle. Holle has very ancient origins indeed, and is a Weaver Goddess, a Spinner of fate.   Mother  Holle is very much associated with Yule, and with the hearth and home, especially in the winter.  But she is known throughout northern Europe, an ancient goddess that predates the advent of Christianity. ** Also known as Holda or Hulda, she is a  triple goddess,  embodying the passages of life. In some myths, she is "the ash girl", her face half black with soot and half white.  This comes from a story of how in order to marry the God of Winter she had to come to him neither naked nor clothed, and neither in light or darkness (the White Goddess and the Dark Goddess).   As the Mother goddess, she protected the forest and was often shown among trees.  Holle (interesting to see the relationship in the name - "Holy", "wholly", "whole")  in old age  is Winter's Queen, and Mother Holda is the source of  "Mother Goose"  legends, because the snow flies when the she shakes the feathers from her down bed.  In Holland, they still say that 'Dame Holle is shaking her bed'.

"Frau Holle, as she is known in Germany, was called The Queen of the Witches. The brothers Grimm tell a story of step-sisters who both go to visit Frau Holle in the 'nether realms'. They begin their journey to her by falling in a well............Holle's name is linguistically related to the word Halja, which means "covering", and is the ancient Teutonic name for Hel, the Norse land of the dead. Holle is sometimes called the Queen of the Dead, and resides in the 'nether' regions. She possibly lent her name to the country Holland, 'the land of Holle', which is also called the Netherlands because many parts of the country are below sea-level."

Holle/Hel  is thus  both light and dark, young and old, illumination and shadow. Whole.

And who is Hel, the ashy side of Holle's face, from whose name we get "Hell"?   Besides being the origin of the word people use daily as a swear word, and millions of Christians have a mighty fear of going to (without knowing anything about where the concept originated from).  People no longer remember that once "go to Hell" meant to die.

Her realm is named for her, Hel or Helheim. Because She accepts all to Helheim, she also becomes the judge to determine the fate of each soul in the afterlife. The evil dead are banished to a realm of icy cold (a fate that the Nordic people found much worse in telling than a lake of fire). Unlike the Judeo-Christian concept, Helheim also served as the shelter and gathering place of souls to be reincarnated. Hel watches over those who died peacefully of old age or illness. She cares for children and women who die in childbirth. She guides those souls who do not choose the path of war through the circle of death to rebirth."............

Rowen Saille of the Order of the White Moon, 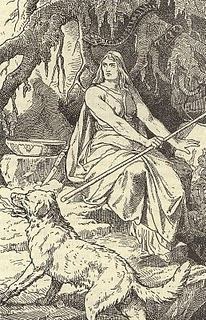 Like Persephone, who is both the Queen of Spring and the Queen of Hades, Hel as the dark side of Holle governs the world beyond that of the living, the underworld or invisible realm. In magic, she makes thin the veil between worlds.

Seidhr [SAY-theer] or Nordic shamans called upon Hel's protection and wore  "the helkappe", a magic mask, to render them invisible and enable them to pass through the gateway into the realm of death and spirit.  The Helkappe, a mask, was thus understood as a liminal tool that enabled transit between the seeming dualities of life, and was infused with shamanic power.  To take this metaphor further, to wear a mask consciously, and as a psychic/sacred tool, is to engage consciously with the continual flux of personae - young/old, dark/light, good/bad.  This is the realm of the soul, beyond duality.  Wearing that kind of mask,  and taking it off at will, enables one to enter both realms. 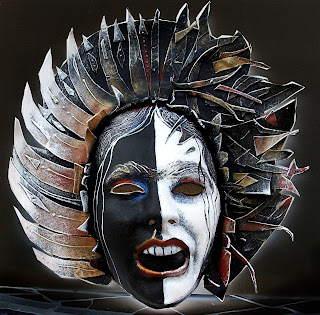 For anyone who may wonder where the "flying broomsticks" of witches (or Harry Potter) comes from, Dame Holda is probably  the source.  Because of her association with the hearth and home, the Broom was both symbol and magical tool.  Folk traditions of "sweeping away evil from the hearth" are very ancient throughout Europe.  As a symbol of the Hearth, it is interesting to see this also transformed into the "vehicle of witches".  In later folktales, Frau Holle becomes a fearsome hag, riding her broom and bringing the storms of winter.


A wonderful commentary on Holle/Hel come from the   Goddess Inspired  Blog
and again I quote, as she writes so beautifully of the non-duality of this myth.

"Mother Holle  started off Her existence as the Goddess of Death and Regeneration. During the Neolithic in what Marija Gimbutas termed Old Europe people believed in the cyclical nature of all existence. Every ending was understood to be the beginning of a new chapter. Death, rather than being the final end, was seen as a resting stage prior to new life. Just as seeds rest deep undergound during the cold winter months waiting to sprit up as a seedling in spring, so were the dead seen as having returned to the Goddess’ dark womb to await renewal and rebirth.

The Goddess of Death and Regeneration was associated with winter and the colour white. Small stiff white Goddess figurines with small breasts and exaggerated pubic triangles were placed alongside the dead in order for Her to accompany the person on her or his journey of renewal. The Goddess of Death and Regeneration was not feared or seen as being evil, but instead was considered to be benevolent and generous.


“She holds dominion over death, the cold darkness of winter, caves, graves and tombs in the earth….but also receives the fertile seed, the light of midwinter, the fertilized egg, which transforms the tomb into a womb for the gestation of new life.”..... Marija Gimbutas

Old white-haired Mother Holle and Her underground realm are one interpretation of this aspect of the Goddess. In the fairy tale Mother Holle is described as being kind and generous and very just. She lives at the bottom of a well. The well itself can be interpreted as being the birth canal leading to Her dark underground womb...........Mother Holle is described as having ugly big teeth, a big nose and a flat foot. The latter shows her love for weaving or spinning, another sacred act associated with the Goddess: She is the Life Weaver, the Spinner of Destiny and Fate.

Mother Holle was known all across the Germanic world. She was called Holle in Germany, Hel or Hella in Scandinavia and Holde on the British Isles. She is the origin for the word hell and its German variant Hölle, as well as words such as holy and holding in English and Höhle (= cave) in German.

The Scandinavian Goddess Hel is probably the most widely known version of Mother Holle as Goddess, although by the time the Indo-European Norse wrote down their religious beliefs, Hel was no longer the benevolent Regeneratrix of the Neolithic. She had become the dreaded Queen of the Dead. 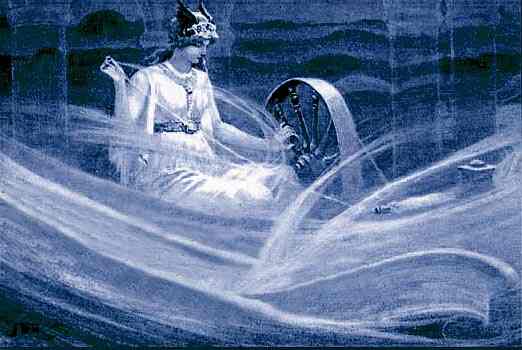 As was the case during the Neolithic, Hel’s realm Nifhelheim also lies below the earth at the root of the World Tree. Incidentally the bottom of the World Tree is also home to the three Norns, Weavers of Destiny. While, as said above, originally the Goddess of Death and Regeneration was also the Weaver of Fate and Fortune, later beliefs separate Her more and more into Her various aspects.


Despite being feared by the Norse as the dreaded Hag of Death, Hel has Her benevolent roots hidden in plane sight. Being linked to the earth, She is one of the old Vanir Earth Goddesses, Vanir meaning “the Giving One”.

In Central Europe Mother Holle also evolved over time. Instead of becoming the Goddess of the Underworld, though, She became the Queen of Elves and the Mistress of Witches. Her character was actually very similar to that of Greek Hekate, the old Crone who roams the world with Her fearsome dogs.   Around 900CE Frau Holle had become an old weather hag who was said to ride in on Her broom stick bringing with Her whirlwinds and snowfall. Her life-giving generous nature was retained more in Germany than in Scandinavia, as even during Christian times She was seen as bringing life to the land causing growth, abundance and good fortune."

You bring myth alive, Lauren. I think you and Debra Page are on similar pages:
http://mythicmusing.blogspot.com/2011/04/planetary-empaths-reindeer-people.html