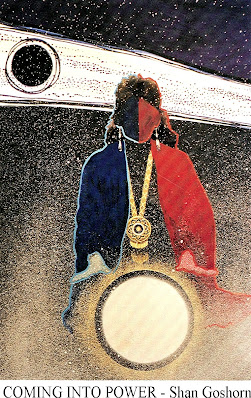 "The Work of seeing is done,
now practice heart-work
upon those images

A print of the image above was given to me  as a gift, and I have carried it around and placed it on my altar for at least 10 years.  I did not know who the artist was until 2012 when I was delighted to discover Cherokee artist  Shan Goshorn's site.  What a magnificent body of work!

The image above that has spoken to me over the years is not even on her site, and I don't know what it meant to her.  But to me it speaks of "coming into power" as the maturation of integral consciousness.  The masked figure "gathers power" as he/she embodies, "drums with",  the union of opposites.  Red and Blue represent opposite elements or forces, heat and cold, fire and water, dark and light.  The orbs could be both the sun and the moon, as well as the interplay and synthesis of dark and light, conscious and unconscious, heart and intellect. As the figure drums, she/he resonates and harmonizes with the starry rythems of creation.  The mask is, to me, self becoming transparent, personality and ego a thin mask over a field of stars, the cosmos, the greater life we are part of.  The white band in the "sky" could be the energy of spirit, or the vast rim of the Milky Way.   This image is important to me, a great gift by a sacred artist.

Learning that the artist is also weaving  together the broken threads of the past to create healing baskets that re-member and re-join brings the idea of "coming into power", for me,  into even greater focus. I was particularly moved to see her work as a Weaver of Sacred Baskets.  She creates  "medicine baskets" in traditional designs and techniques that are woven with words, some in English, some in Cherokee.  One that I found truly moving  was woven of broken contracts, the names and photos of children taken from their communities and forced to attend boarding schools. I'm so pleased to share a bit about Shan Goshorn's  powerful and (to me) shamanic  art..... 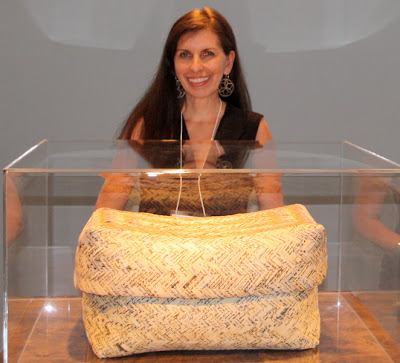 Shan Goshorn's award winning basket “Educational Genocide – The Legacy of the Carlisle Indian Boarding School” was created with a Cherokee-style double weave, and was made from splints of paper that had student’s names and historical documents and photographs who were taken from their parents and force to attend the boarding school.  A photograph of the Carlisle Student Body of 1912 was woven around the perimeter of the lid. 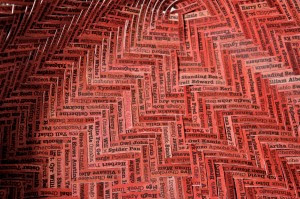 "The devastating impact boarding schools has had on Native culture cannot be overlooked. Native children were removed from their families, homes and communities and sent to live in these military-like facilities in an effort to be whitewashed into the dominant culture.  The goal of these institutions was to acculturate and “civilize” Indian children, thus stripping them of their Native identity and resulting in the loss of language and tribal customs.

Woven into this basket are Navajo, Lakota and Kaw tribal prayers of healing and well being, collected for the healing and well being of generations of boarding school victims.  Also included are the words to a Cherokee Memorial Song, “We remember your sacrifices. You will not be forgotten.” In order for race relations in this country to truly be repaired, America has to accept responsibility for this travesty and make amends. "

"Traditionally, native women held positions highly revered in their communities, often respected as leaders, warriors and always as the bringers of life. However, after first contact, non-native men frequently viewed indigenous women as disposable sexual commodities. Based on today’s disproportionately higher rate of violence toward native women and a judicial reluctance to prosecute these crimes, it is a belief that appears to be ongoing.  Statistics in the U.S. indicate three in five native women will be physically assaulted; 34% will be raped; on some reservations,native women are murdered at more than ten times the national average; and U.S. attorneys declined to prosecute 67% of sexual abuse related cases. In Canada, a 2015 report by the Royal Canadian Mounted Police (RMCP) concluded 1,049 aboriginal women had been slain between 1980 and 2015, and that another 175 were considered missing. Patty Hajdu, Canadian Minister for the Status of Women, reported in 2017 that 4,000 would be a more realistic number based on a history of police under-reporting or failure to properly investigate cases. The Canadian Broadcasting Corporation (CBC) reports that activists with the Walk 4 Justice initiative collected at least 4,232 names of missing or murdered indigenous women.

Although the numbers tell a story, revealing a tragic disparity that must be rectified, we must remember the persons behind the numbers. This Cherokee style single-weave basket was created not only to point to the statistics but also to humanize women who’ve lost their lives. Woven in the traditional pattern called “Water”, the vertical splints are printed with high stats of violence directed at native women in the U.S.; the horizontal splints compile the discrepancy in gathering such numbers in Canada. The interior is printed with the names and tribes, compiled by the CBC, of 306 murdered and missing women, cases the RCMP dismissed as solved. The families of these women dispute this resolution.

The Red River, which runs from Winnipeg, Canada to northern South Dakota, has become known as a place where the bodies of women are regularly recovered making its name (Red River) heartbreakingly fitting. Included on the front of the basket is a red-lined map of this river, a visual gash to serve as a reminder of this place where native women have been discarded and seemingly forgotten. It is time to recognize the humanity of these women, mourn the value of their lives and put a stop to this terror. " 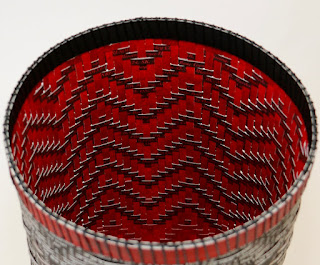