The World Parliment of Religion 2015 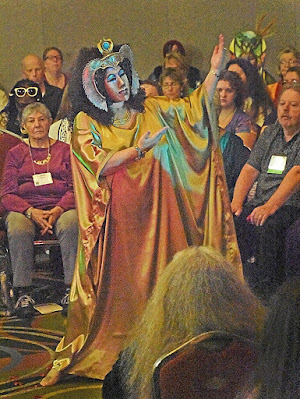 "What the audience saw when a dancer looked through the eyes of the mask was the Goddess Herself, an ancient and yet utterly contemporary presence, looking across time, across the miles."


In Salt Lake City in  October  at the Parliament of World Religions a group of women and men will be  will be literally  “bringing the Goddess to life”.  “Goddess Alive!” is produced and written by M. Macha NightMare (Aline O’Brien), with Mary Kay Landon.  Participants will use my “Masks of the Goddess” Collection to create a ritual theatre event honoring the many faces of the Divine Feminine throughout the world.

The Masks of the Goddess Project began in 1998, and since then the ever-evolving, multi-cultural collection of masks have travelled around the U.S. to different communities for dance, storytelling, exhibit, and personal invocation, always collaborative. 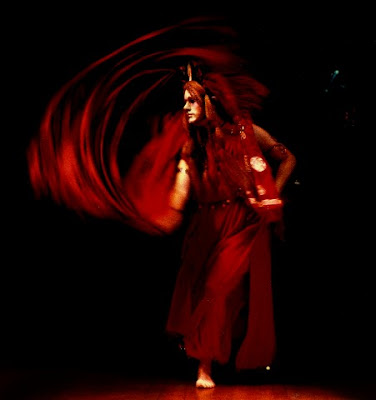 "The work of our group was not to re-enact the ancient goddess myths, but to take those myths to their next level of evolutionary unfolding. We are the mythmakers.”


In 1999 I was invited to create masks for the Invocation of the Goddess at the 20th Annual Spiral Dance in San Francisco.   I wanted to offer the collection as contemporary "Temple Masks" devoted to the Goddess.    It’s been my great privilege to see the masks used in numerous communities, as well as to produce several events myself, and over the years an archive of performances, stories, and interviews has accrued as the Collection travelled, gathering story. 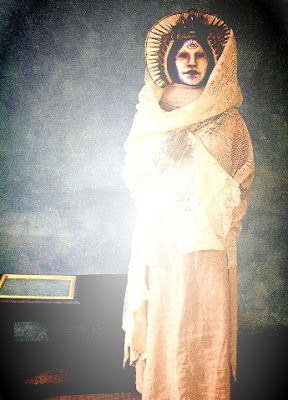 What does the story of Sedna, ocean mother of the Inuit, have to teach us about reciprocity with  nature?   What happens when an audience member stands before the Gnostic "Mirror of Sophia"?   How is the "Descent of Inanna" about a woman’s journey toward wholeness?  What might Spider Woman, the native American creatrix/weaver, communicate to us as she weaves a Web with the audience?

As the Goddess is invoked through the masked dancer’s performance, these stories come alive as a visible Presence.   Through the medium of masks, we have sought to re-claim and re-invent for today the universal, ancient, important stories of the Goddess, as well as empowering women to explore each archetypal presence within herself.   Masks are potent bridges for transformation, and by working with the mask as both performance and invocation the process serves as a blessing for both the audience and the dancer. 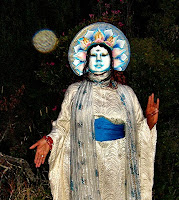 Macha Nightmare and colleagues such as Ann Waters, Mana Youngbear, Diane Darling and others have evolved some simple, and yet very effective ways to work with the masks and community ritual theatre – one such is the use of the “Greek Chorus” to tell each story as the dancers emerge.  They have also included in their performances original music by collaborating musicians, and a ritual component that allows for interaction with the audience/celebrants.
In 2013 I produced a new series I called "Numina - Masks for the Elemental Powers",  for a new play by Ann Waters - "The Awakening - Our Changing Earth".   The Romans believed that places were inhabited by  intelligences they called Numina, and many gardens or springs had little shrines dedicated to them, the "genius loci", of a particular place. I have often asked myself how we can regain this sense of  communion with the elemental powers of place that are the true wellsprings of myth.

In the past, "Nature" was not  a "backdrop", or a "resource" – it was a  conversation with many voices and many faces.  The "Numina Masks" arise from worldwide Goddesses associated with place, such as fiery Pele of Kilaua in Hawaii, or The Lady of Avalon, felt so strongly at the sacred wells of Glastonbury….. or the deep mystery of the desert, the realm of the ancient “Bone Goddess”.  My masks arise from my imagination, but invite others to  collaboratively "join the conversation".  This year (2015) I continue to create new masks for the Masks of the Goddess Collection, and the collection continues to be available to groups and individuals.  For information:   www.masksofthegoddess.com 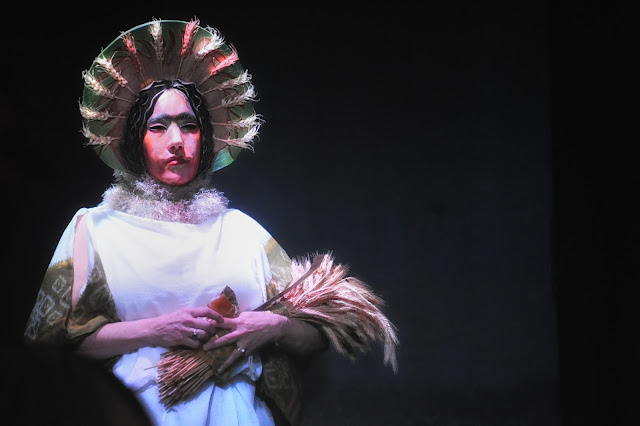 Photographs illustrating this article are with permission of  Thomas Lux, Ann Beam, and Jerri Jo Idarius.
Posted by Lauren Raine at 6:09 AM

These masks are stunning. And what a perfect celebration!