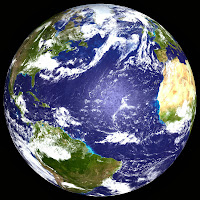 In keeping with the previous post,  I feel I need to post this important summary from the Intergovernmental Panel on Climate Change.  We need to remember and re-invent and inspire all the good things that are being done, all the people who are developing grass roots programs, alternative energy, activism for the Earth, and new paradigms of spirituality that encompasses nature, justice for all beings  upon the Earth, and justice for our children, who must live into a changed and troubled future.   But there cannot be room any longer for denial.............

Global scientific consensus says the planet is changing in ways unseen in thousands of years and if something 'substantial' not done, and soon, the results will be unthinkable."

If the public and policymakers want a single adjective to describe the findings of the Intergovernmental Panel on Climate Change's new assessment report that's the word.
Released Friday, the IPCC report states, that "warming in the climate system is unequivocal and since 1950 many changes have been observed throughout the climate system that are unprecedented over decades to millennia."

"Our assessment of the science finds that the atmosphere and ocean have warmed, the amount of snow and ice has diminished, the global mean sea level has risen and the concentrations of greenhouse gases have increased,” said Qin Dahe, Co-Chair of IPCC Working Group I, responsible for this first stage of the IPCC's report on climate.  Read the full report here.  Headline statements from the IPCC here (pdf).  The report reaffirms that the human influence on the planet's dramatic warming is clear and beyond reproach. According to a press statement accompanying the release of the report:


It is extremely likely that human influence has been the dominant cause of the observed warming since the mid-20th century. The evidence for this has grown, thanks to more and better observations, an improved understanding of the climate system response and improved climate models.

Thomas Stocker, Co-Chair of the working group behind the report indicated that in order to prevent the worst case scenarios presented in the report for the century ahead, governments will need to take aggressive action. "Continued emissions of greenhouse gases will cause further warming and changes in all components of the climate system," Stocker said. "Limiting climate change will require substantial and sustained reductions of greenhouse gas emissions."

The IPCC document—officially labeled as IPCC Working Group I assessment report (AR5) and titled Climate Change 2013: the Physical Science Basis—was approved by the world scientific body on Friday in Stockholm and is the panel's official statement—made after hundreds of the world's top scientists reviewed thousands of studies—on climate change, ocean and atmospheric temperatures, and global warming.

“As the ocean warms, and glaciers and ice sheets reduce, global mean sea level will continue to rise, but at a faster rate than we have experienced over the past 40 years,” said Dahe.  And its other key findings are startling. They include:
“The world’s scientists have spoken," said Sarah-Jayne Clifton, climate justice and energy coordinator for Friends of the Earth International, in reaction to the report. Clifton said the report once again reaffirms "now with absolute certainty" that climate change is caused by humans and "that it poses a severe and immediate threat to our future and that of the planet."

"Communities around the world are already being devastated by extreme weather. It is untenable for our political leaders to continue their inaction," she said. "The interests of humanity must be prioritized above the profits of dirty energy corporations through an urgent and dramatic transformation of the world’s corporate-controlled, unsustainable energy system."
Posted by Lauren Raine at 8:31 PM

Interesting. We've got a post coming up on this, too, although your post certainly offers much more detail. We'll link to it. Thanks, Lauren.I a nutshell, as Malcomb Gladwell might say, it looks as if we have passed the tipping point.