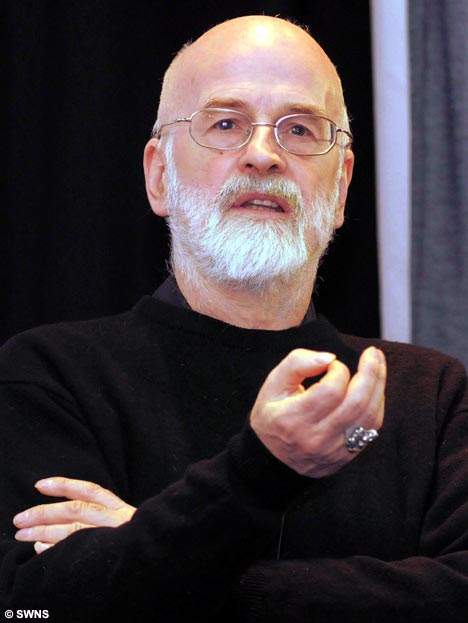 "It is said that your life flashes before your eyes just before you die. That is true, it's called Life"

"The trouble with having an open mind is that people will insist on coming along and trying to put things in it."
Terry Pratchett

I have always loved Terry Pratchett, who, like Ursula Leguin, has provided me with such wonderful worlds to investigate, laugh about, and learn from in his prolific writings.  He  is so beloved in England that he became Sir Terry Pratchett. Sir Terry Pratchett is the acclaimed creator of the global bestselling Discworld series. He’s the author of fifty bestselling books and his novels have been widely adapted for stage and screen. He’s the winner of multiple prizes, including the Carnegie Medal, as well as being awarded a knighthood.  In December 2007, Sir Terry announced that he’d been diagnosed with Alzheimer’s, and he has campaigned and donated $1 million to Alzheimer’s Research UK.

In this documentary Terry Pratchett discusses his Alzheimer's and how it is slowly eroding his life and his talent. He meets others with medical conditions which will inevitably lead to a prolonged, painful and above all undignified death and asks the question "is it better to end things early?" There are few answers here. Pratchett has spent his life inquiring into every cultural assumption, and his film is no less a genuine mission of inquiry as he faces his own situation.  He takes a frank look at a subject most shy away from.

I try to keep my blog on the light side, or at least, the political/mystical side, but sometimes I don't know how to write away my personal troubles.  For five years now, my brother Glenn has been in a vegetative state in a nursing home, the result of a brain stem stroke in 2008.  I am also responsible for my mother, who, thankfully, is in an assisted living facility, and slips away into a cheerful, if confused, dementia.  Although I comfort myself with the idea that "brain dead" means no consciousness, and he's not in his body anymore,  to be honest, Glenn's one good eye opens, sometimes you would swear he's looking at you, his mouth moves.   How do you deal with that, the thought that he may be conscious sometimes?  If he is, I can't help him.  My other brother will not legally allow me to remove life support, and if I pull the plug, I would become a person who is legally considered a murderer.  And so I go talk to him, tell him he can leave this world, tell him not to be afraid.  I wish I was a medium, or had the faith of a priest sometimes.

Sir Terry's film is somewhat related, and a hard film to watch.  Most people will turn away from having to think about such things, and I don't blame them.   The Romans believed in honorable suicide - when someone felt their meaningful life was over, they would hold a party, invite their friends and family, drink the best wine and favorite food, reminisce and give away gifts.  And then they would slit their wrists, leaving this world among the people and things they best loved.  For myself, it seems a much better idea than to end up like the people in my brother's ward.  I had a friend who, faced with incurable cancer, chose to take all of his saved up pain meds.  I respect his choice, and my only regret is that he wasn't able to gather his friends around to say goodbye when he did it.   I have my own living will, and perhaps, if I'm  faced with something like Terry Pratchett,  that might be my choice as well. I don't know.

Alzheimer's/dementia is a tragic disease. I'll take a look at this film when I've got the time it deserves. Thanks for posting this, Lauren. Your brother's situation is heart wrenching.

Thank you, my friends.

Thank you for posting this documentary. It has seeped into my soul and I am living with it...I feel so much admiration and compassion for the folks who allowed their sacred death experience to be shared with us all....amazing...courageous people. Thanks!