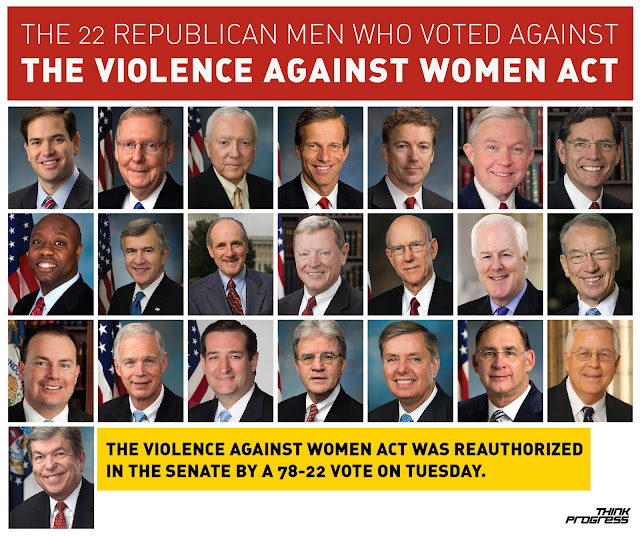 Homicide, battering, and rape statistics overwhelminglhy demonstrate that women and girls suffer great violence in this country, and thoughout the world. But apparently these patriarchs don't think it's worth passing a bill to protect them, or even make a passing comment on the problem.  But the good news is that the bill passed.  The bad news is that these people are still in Washington.
Sheryl WuDunn, co-author of "Half the Sky", which became a powerful documentary aired on PBS last year, said that gender violence and discrimination is the "Injustice of our century", and I believe she is absolutely right.  So deeply embedded in our culture is the oppression of women, that it was some 70 years after freed black male slaves were given the vote that women were allowed to also vote in the U.S. - and only because courageous women made that possible through great sacrifice.  We have a Martin Luthor King Day, but there is no day devoted to the Suffragettes, to Susan B. Anthony or Lucy Burns,  or Margaret Sanger, who first made birth control available to women, or innumerable others who worked to give to women the same rights over their lives, finances, and bodies that men took for granted.  Nor is the work over.

I love TED talks, and was delighted to hear this one by Jackson Katz, Ph.D., who points out that addressing gender based violence is not "just a women's issue", but a profound human issue.  I think all boys and men should hear him.

Great post. These idiots should all be fired. Impeached.