Greg Braden and "The Science of Miracles" 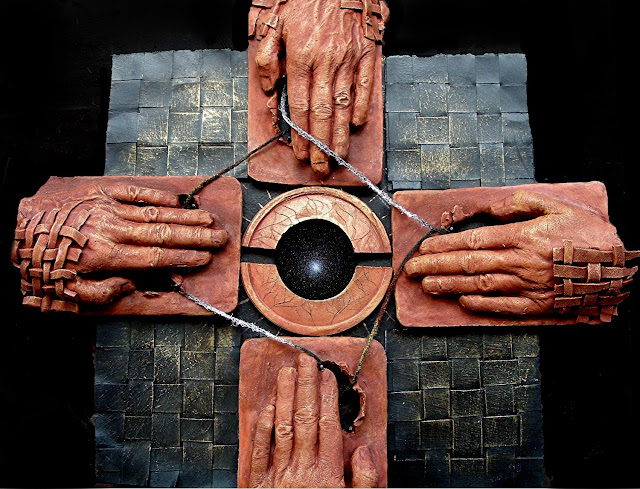 "When we form heart-centered beliefs within our bodies, in the language of physics we're creating  the electrical and magnetic expression of them as waves of energy, which aren't confined to our hearts or limited by the physical barrier of our skin and bones.  So clearly we're "speaking" to the world around us in each moment of every day through a language that has no words:  the belief-waves of our hearts.

In addition to pumping the blood of life within our bodies, we may think of the heart as a belief-to-matter translator.  It converts the perceptions of our experiences, beliefs, and imagination into the coded language of waves that communicate with the world beyond our bodies.  Perhaps this is what philosopher and poet John Mackenzie meant when he stated, "The distinction between what is real and what is imaginary is not one that can be finely maintained ... all existing thing are ... imaginary." 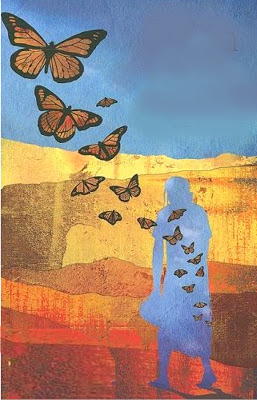 I enjoy the quote above by philosopher and New Mexico visionary Gregg Braden........except at the end of the last quote, I might change "imaginary" to "imaginal".   Because, as Braden himself so fully argues in his life work, that's really where we are collectively now - at the "imaginal threshold" of our species evolution.

I began this journal almost 6 years ago, as a journal for the evolution of my project "Spider Woman's Hands", which I received a Fellowship at the Alden Dow Creativity Center in Midland, Michigan to pursue.  In 2009 I was resident artist at Wesley Theological in Washington, D.C., and continued the project.  My fascination with ubiquitous myths and symbols of Spider Woman, from the Pueblo peoples of the Southwest, the Navajo weavers, the prehistoric Mississippian people, even the Maya......began with a deep realization of the significance of this metaphor of the Great Weaver for our time on multiple levels:  ecological, social, spiritual, and quantum.  We live in the participatory universe of Spider Woman, weavers and woven.  One of the names for Spider Woman among Pueblo peoples is Tse Che Nako, "Thought Woman", because She made the world with the stories she told about it.  There is a great Keresan Pueblo proverb that says,

"Tse Che Nako, Thought Woman, the Spider
is sitting in her room thinking up a good story.
I'm telling you the story she is thinking."* 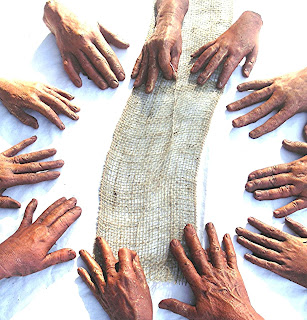 Pueblo legends hold that it was Spider Woman who led the people through the cosmic Kiva at the end of each age into the new world.  According to their calendar, the 4th World is now ended, and we are entering the 5th World........and I believe that once again, it is Grandmother Spider Woman who is showing the Way, offering us the opportunity to pass through the Kiva, the Birth Canal, into a  new world, with the truth of  Her great Web at the very center.  We all know the Precipice we hang on as a common humanity.  Our technology and technological connectivity will either be the end of our evolutionary promise, or we will become a truly global humanity.  The new World, or "New Age", will be an age that puts into practice the great truth of  unity within the great co-creative diversity of life.  What I would like to pursue in future posts is not only how this is being demonstrated by science as well as metaphysics, but how we can, and are, putting the "New Paradigm of Connectivity" into pragmatic practice.  Because that's ultimately the good news we need.

As I return to  Spider Woman's Web, I find Greg Bradon, in  "The Science of Miracles", makes an eloquent discussion of how Quantum physics and metaphysics now agree on a "conversant world".


“The act of focusing our consciousness is an act of creation.
Consciousness creates!” ~~~ Greg Braden

He's a fascinating writing. Thanks for posting the video. Will be back to take a look.

That's supposed to be writer, not writing.