Carol Christ on Patriarchy and War

"Control of female sexuality is fundamental to the patriarchal system.  This explains why there is so much controversy about the “simple matter” of access to birth control and abortion and so much anger directed at single mothers. " ~Carol Christ

I never cease to be amazed that, in spite of the looming catastrophe of over population, and the immediate evidence of misery and violence engendered by unwanted pregnancies, single mothers, often children themselves, struggling to care for children in an increasingly shrinking welfare system...........I never cease to be amazed that the contemporary versions of Biblical Patriarchs continue to fight for the right to control the bodies of the female population.  Here's a brilliant article I felt like reprinting by Carol Crist that takes a long look at the issue, so deeply embedded in our world today, and so very crucial to change.

Patriarchy as a System of Male Dominance Created at the Intersection of the Control of Women, Private Property, and War

Patriarchy is a system of male dominance, rooted in the ethos of war which legitimates violence, sanctified by religious symbols, in which men dominate women through the control of female sexuality, with the intent of passing property to male heirs, and in which men who are heroes of war are told to kill men, and are permitted to rape women, to seize land and treasures, to exploit resources, and to own or otherwise dominate conquered people.*

In last week’s blog, I explained patriarchy as a system in which men dominate women through the control of female sexuality with the intent of passing property to male heirs.

How did a system that identifies a man’s essence with his property and the ability to pass it on to sons come about? I suggest that the answer to this question is war and the confiscation of “property” by warriors in war. Patriarchy is rooted in the ethos of war which legitimates violence, and in which men who are heroes of war are told to kill men, and are permitted to rape women, seize land and treasures, to exploit resources, and to own or otherwise dominate conquered people. 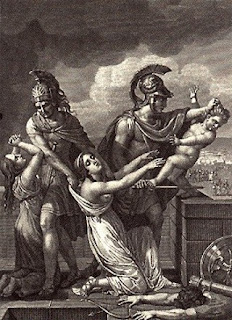 Though many people were surprised when the rape victims of the recent war in Bosnia began to speak out about the use of rape as a tool of war by Serbian soldiers, in fact, rape has always been an “ordinary” part of war. In the “great” epic known as The Iliad which is said to be the foundation of western culture,  Achilles and Agamemnon are fighting over which of them has the right to rape a “captured” woman named Briseis.  The term “spear captive” is used to mask the reality that Briseis and other women like her were “rape victims” and that the “heroes” being celebrated were their “rapists” and “jailers.” I believe that the institution of rape and the (twisted) notion that men have a right to rape (certain kinds or types of) women originated with war.

The institution of slavery also originated in war. Both the Bible and the Greek epics testify to the ancient custom of enslaving the women and children of the enemy.  Slave women in every culture, like the slave women on plantations in the Americas, are at the mercy of their owners and his sons, who can rape them if they felt like it. The “custom” of taking slaves from the enemy and the “custom” of also taking enemy women sexually, is deeply intertwined with the history of war.  The Africans who sold other Africans into slavery in the Americas were selling Africans they had taken as the spoils of war. 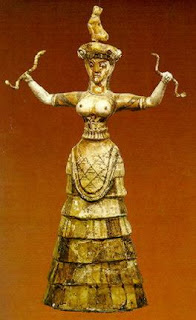 If we entertain the hypothesis that earlier matriarchal clan systems existed, then we can see that the notion of individual powerful men’s peri-ousia being defined as the treasures, land, and people they property they “stole” and then claimed to “own” would have involved a massive cultural shift.  The shift to defining men by the property they owned required that men would also ”own” and absolutely control their wives and daughters, who had previously been free.  Such a cultural shift could only have been instituted and maintained through violence. 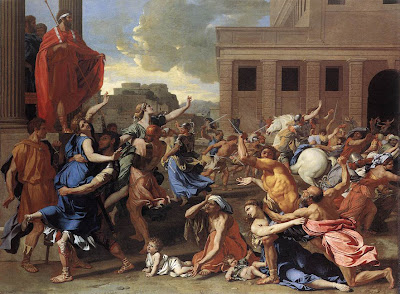 How does such a violent system legitimate itself?  By religious symbols.  In Greece, warriors were “in the image” of the “warrior God” Zeus whose rape of Goddesses and nymphs was celebrated.  In Israel, the power of warriors is mirrored in a male God who is called “Lord” and “King” and who achieves his will through violence and destruction. Sadly, this is not an exclusively western problem. In all of the so-called “highly developed” cultures defined by patriarchy and war, symbols of divine warriors justify the violence of men.  Laws said to have a divine source enshrine men’s control the sexuality of their wives, permit some men to rape some women, and allow some people to own other people as slaves.

Patriarchy is not simply the domination of women by men. Patriarchy is an integral system in which men’s control of women’s sexuality, private property, violence, war, and the institutions of conquest, rape, slavery arise and thrive together. The different elements are so intertwined that it is impossible to separate one as the cause of the others.  Patriarchy is an integral system of interlocking oppressions, enforced through violence.  The whole of the patriarchal system is legitimated by patriarchal religions.  This is why changing religious symbols is necessary if we hope to create alternatives to patriarchal systems. 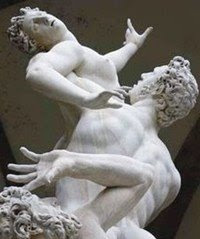 The model of patriarchy I have proposed argues that control of female sexuality is fundamental to the patriarchal system.  This explains why there is so much controversy about the “simple matter” of access to birth control and abortion and so much anger directed at single mothers.  The model of patriarchy as an intergral system can help us to see that in order to end male domination we must also end war–and violence, rape, conquest, and slavery which are sanctioned as part of war.  We must also end the unequal distribution of wealth inherent in the notion of ”private” property, much of it the “spoils” of war, which led to the concept of patriarchal inheritance, which in turn required the control of female sexuality.  As feminists in religion we must identify and challenge the complex interlocking set of religious symbols which have sanctified the integral system of patriarchy–these include but are not limited to the image of God as male.  Ending patriarchy is no small task!


*I am offering a functional definition of patriarchy that does not address the separate question of why it originated.  I will be publishing an expanded version of this dicussion in the future.

This Article is from Feminism and Religion, February, 2013

Carol P. Christ will be leading life-transforming Goddess Pilgrimages to Crete through Ariadne Institute this spring and fall.  Join her and learn more about prepatriarchal woman-honoring Goddess cultures.  She spoke on a WATER Teleconference recently which you can listen to now if you missed it.  Her books include She Who Changes and Rebirth of the Goddess and the widely used anthologies Womanspirit Rising and Weaving the Visions.
Posted by Lauren Raine at 8:07 AM

Patriarchy is rooted in Jung's theory about the anima and animus, that we each contain the gender qualities of the other.We can't blame men. We must rise above them, above that warring mentality, that "you are mine "belief system. And that happens one individual at a time.

Yeah, I agree with Trish and Rob, it's a spiritual phenomena. When spiritual beings "fall" into this PHYSICAL world they are dominated by three main concerns: PHYSICAL survival; PHYSICAL reproduction; PHYSICAL dominance or will to power! The only answer is to "rise again" into the mental or spiritual realm. It's also intersting from a scientific perspective that social infuences actually effect brain structure (J. Y. Chiao, Cultural Neuroscience), i.e. it's a self-sustaining, self-perpetuating pathology. I think this is well demonstrated by the state of things concerning the guns in America, it's all related to this same Patriarchal Pathology - hey, a new cultural term! But although the key seems to be to "rise above" the physical/patriarchical accessing the mental/matriarchical, once accomplished I believe the Bodhisattva Ideal requires balance . . . it's just a personal observation!