The Gospel of Thomas the Twin (Revisited) 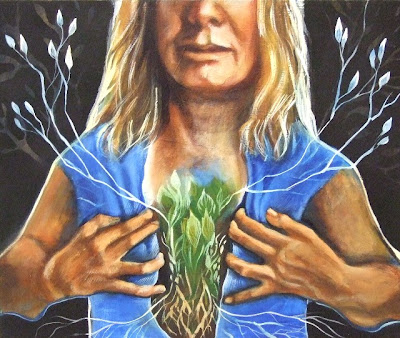 Yesterday I received several emails  that were classic fundamentalist  "Hate Mail".......... you know, the "rightous" would be saved, and the "un-rightous" (me) were (and they always are so gleeful about the idea) to be tortured eternally in the fiery realm of Hell (to read about the origins of "Hell", or "Hella", underworld Goddess visit this post) unless I was "saved".  I deleted them immediately, as shocked as one might be to suddenly see a scorpion crawl out from under your morning coffee cup. 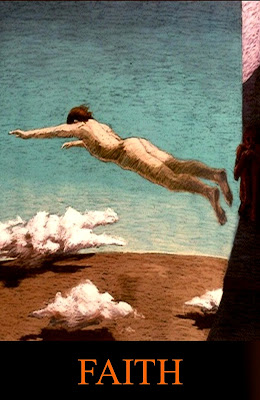 And yet, it also made me sad.   Even in the contemporary Bible, there are inspired early teachings of non-violence like  "love thy neighbor, turn the other cheek, do unto others".........etc.  I am saddened when I consider that the early teachings of Christianity, focused around an inspired Teacher, who taught voluntary simplicity and  lived in austere poverty,  teaching in parks or by the wayside for free, sleeping in a bed if it was offered or on the ground if not.   A Teacher who was a revolutionary for his time and, like most revolutionaries,  was persecuted by the establishment of his time and killed for his dangerous ideas.  Whose teachings included the importance of realizing that we are all, ultimately, "twins"..............to think that these origins should have come  to be associated with such hateful drivel.  Which might be laughable, except for all the "god fearing" suffering it engenders,  the Inquisitions, the "holy wars", the use of "God" to justify just about anything..........  I am always amazed at how few people actually take the time to research, even just a little, the historical origins and the mythic landscape from which Christianity grew out of.

As the primary religion in the U.S., Mexico, and South America, with a new Pope ensconced in magnificence in the Vatican.......it is a strange evolution.  Thinking of these things, I felt like pulling up a little article I wrote in 2011 to meditate on again........

Looking at Christianity from its Gnostic origins, then, what exactly does it mean to "be saved"?  Saved from what?  I am certain that "hell" and "brimstone" did not come along for a very, very long time after Jeshua of Nazarath gave his teachings in a olive grove.

The Gospel of Thomas


The first quote above,  from the Gospel of Thomas (found in 1945 with the Nag Hammadi Gospels, which were very early writings from the advent of  Christianity and apparently hidden because they were considered heretical)......came into my mind yesterday.  I have not thought of this beautiful quote for many years.  When I began my "vision quest", shortly after graduate school,  to learn about art and spirituality I wrote this quote into the margins of notebooks.  The second quote also, I feel, contributes to these reflections.
According to Wikipedia, the introduction to the Gospel of Thomas states that "These are the hidden words that the living Jesus spoke and Didymos Judas Thomas wrote them down." Didymus (Greek) and Thomas (Aramaic) both mean "twin".   Some scholars have pointed out that there was a widespread tradition in early church documents, as well as some surviving Christian traditions, that Jesus had a twin brother, by the name of Didymos Judas Thomas, but most feel this is unlikely.   My sense is that the meaning of "twin" can be understood, from the vantage point of the early Gnostic Christianity, as a metaphor.  All are  "twins" of the great teacher, with the same potentiality and the same  origin - this idea, of course, along with most of the Gnostic sects,  would have been highly heretical as the church became an institution and developed the latter idea of Jesus as divine savior, with it's hierarchy .

I've been thinking a great deal about what Jung termed "Shadow".  I believe this  saying from the Gospel of Thomas  is significant to an understanding of this concept.  I carried it about as an encouragement to be an artist, to affirm deeply the life-affirming creative impulse. But one does not have to be a professional artist to "bring forth that which is within".  It is interesting that in his book THE GOSPEL OF THOMAS:  The Gnostic Wisdom of Jesus***, Jean-Yves Leloup refers often, in his translation of the parables of Jeshua,  to the "divine seed - in other words, the creative code", implying a fundamental creative source and/or creative destiny at the root of all spiritual growth. 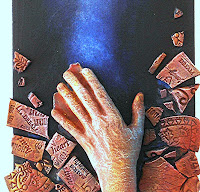 We are all creative, in fact, the need to create may be our most profound human drive, right up there with sex and reproduction (which, if you think about it, is all about creation as well).  We come into the world with this energy, this drive, some even say we each come into the world with a creative destiny, a "soul purpose".  We are channels and depositories of creative energy, and through expression of creative energy we are affirmed, healed, we learn, we connect with the world and each other, and we're inspired.  It's the life force.  An individual's unique integrity, personal truth, is also deeply connected to the creative force.

Creative energy denied becomes toxic, stagnant, destructive. I believe Jesus was truly revolutionary in this profound statement. To live without responding to one's authentic creative impulse and innermost truth is to live with despair that can become carcinogenic, a breeding ground of physical,emotional and psychic disease and destructive social harm. When we deny our authentic expression, when we lie, we do a great disservice to ourselves.

Here the Gospel of the Twin is saying that we live in a Quantum universe.Nothing is really hidden. What is denied (or unconscious) will still manifest, what is seemingly hidden from ourselves or others is nevertheless perceived on unconscious levels.  We're all connected, integral, telepathic.   All things manifest through the creative potential we possess  - we are all creative and collectively co-creative.  But those forces are neutral - they can manifest as positive or negative, consciously or unconsciously.   We need to take responsibility for the font of creative force that each of us is. 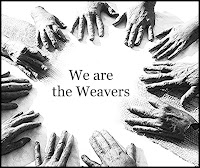 *** Leloup, Jean-Yves, THE GOSPEL OF THOMAS:  The Gnostic Wisdom of Jesus, 1986, Inner Traditions Publishing
Posted by Lauren Raine at 12:39 PM

Love this entire post. I especially love the line about bringing forth what lies within. And I agree, our creative drive is the most powerful drive we have.

This inspiring information is the perfect conclusion to a manifesting Full Moon Ritual.

I thought perhaps you would find some interest in the papers of Barclay Powers (http://www.integralworld.net/readingroom.html#BP). If you follow the link you can link to his book and documentary called The Lost Secret of Immortality. The Divine Seed is the Golden Embryo of Origin, the Philosopher’s Stone, etc. and it resides in the prostate gland (Skene’s gland in females) until one undergoes transformation (death and rebirth) at which point the Divine Seed is permanently moved to the pineal gland, hence, the reason Harvard’s Sara Lazar finds cortical thickening in meditators. The Skene’s gland is so much smaller than the prostate because females are, for the most part, already enlightened, hence, their role as Spiritual Mother or Virgin Mother. The woman is “The Ferry Across the Ocean of Existence,” the Totality of What Can Be Known, the Harmonization of Opposites; both the River of Life and the River of Death flow from her body. You see, the woman, at least She Pure of Heart, the Virgin, leads the Hero, Her Masculine Counterpart, on the Journey culminating in transformation; the Hero sees the Divine made manifest in the Mother and, through pursuit of that love, discovers the Divine within Himself. Jesus didn’t physically die, he just transformed from physical dominance (Divine Seed in the prostate) to spiritual or mental dominance (Divine Seed in the pineal). Jesus and the Virgin Mary were Husband and Wife, the manifestation of Harmony in the profane world. This is called the Left Hand Path of VamaMarga in the Tantric tradition and is the same path as that walked by all of the well-known Hero/Mother pair: Shiva/Parvati; Krishna/Rahda; Buddha/?; Wotan (Othin, Odin)/?; Dante/Beatrice . . . In the Lakota Souix (Friendly Serpent) tradition there is little emphasis on the Hero, he’s not even named, but a great deal on White Buffalo Calf Woman – the Virgin – which I find exquisite. I’ve written a couple of short papers on this subject myself: Postmoder Mysticism: A Minimalist View (http://vixra.org/pdf/1303.0083v2.pdf) which is only 1 ½ pages and includes a link to Bertrand Russel’s paper, On the Value of Skepticism, which you may appreciate – did you know in Tibet the prevalent practice was for one woman to have multiple husbands?; and Dedicare Omnimodus: A New Ontology of Introspection (http://vixra.org/pdf/1301.0037v1.pdf) which is a bit more in depth.

I don’t know if you are aware but recently the Harvard biblical scholar, Karen King, was presented with a papyrus scroll – in Coptic Greek - which makes mention of Jesus’ wife, Mary. The recent resignation of the old Pope and the installation of a much more humble servant is directly related to the events surrounding the Hopi prophecy and the Mayan Long Count which I’m sure you are aware of – weaving webs as you do . . .

Sorry but I couldn't resist a short quote from the Russel paper:

"A little of such reading must soon reduce any candid person to complete
scepticism, since there seem to be no data enabling us to say that one marriage custom
is better or worse than another. Almost all involve cruelty and intolerance towards
offenders against the local code, but otherwise they have nothing in common. It seems
that sin is geographical. From this conclusion, it is only a small step to the further
conclusion that the notion of "sin" is illusory, and that the cruelty habitually practiced in
punishing it is unnecessary. It is just this conclusion which is so unwelcome to many
minds, since the infliction of cruelty with a good conscience is a delight to moralists.
That is why they invented Hell."

Thanks Wes, an interesting quote!