On Gender Imbalance and Violence 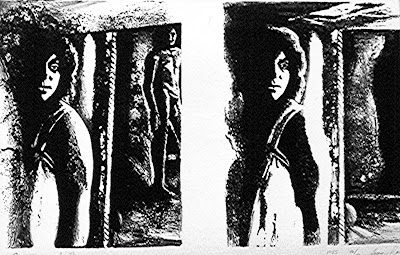 "The dangers of being alone with men (or walking alone at night where groups of young men are) is never mentioned in sermons on Sunday morning. Or talked about in social studies. We just know to "be careful," that's all. It is tucked away on the underbelly of life. It is a taboo subject."
Janie "Oquawka"Rezner, MA
www.janierezner.com


When I was in Bali I visited the Temple of Hanuman, which had a forest full of grey monkeys.  It was not uncommon to see a family unit, the females often with an infant at her breast.  Once I bought a bunch of bananas, and began to distribute them.  Then a big monkey, clearly the "alpha male", sauntered up, looking every bit like a human bully,  bared his impressive fangs, and grabbed the entire bunch from me.  I wasn't about to argue, and I stood there watching as he ate all the bananas.  All the other monkeys gathered around him, hoping he'd drop one. I remember thinking  "I sure hope we can outgrow that one."

In the wake of the tragedy in Colorado, my friend Janie, author and host of a radio show in California based on women's and environmental issues, sent me the article below. Last year my home town of Tucson saw the shooting of Gabrielle Gifford and the deaths that followed that rampage.

Why is it that pointing out gender imbalance, and inequity, is taken as a condemnation of all men? We all know the names of thousands of great men who have brought peace and love to the world. Addressing these issues is addressing human evolutionary issues. No doubt some find it controversial, but Janie is right: No one talks about it, and yet most young women, including the young woman I once was, live with the fear of rape and violent abuse. I felt this article was worth sharing.

The Overwhelming Maleness of Mass Homicide:
Why aren't we talking about the one thing mass murderers have in common?
By Erika Christakis  July 24, 2012
Accused movie-theater shooter James Holmes makes his first court appearance at the Arapahoe County courthouse on July 23, 2012 in Centennial, Colo.
There’s a predictable cycle of mourning and recrimination that follows a massacre like the shootings last week in Aurora, Colo. First come the calls for unity and flags flown at half-mast. Then the national fissures appear: the gun lobby stiffens its spine as gun-control advocates make their case. Psychologists parse the shooter’s background, looking for signs of mental illness or family disarray. Politicians point fingers about “society run amok” and “cultures of despair.”
We’ve been down this path so many times, yet we keep missing the elephant in the room: How many of the worst mass murderers in American history were women? None. This is not to suggest that women are never violent, and there are even the rare cases of female serial killers. But why aren’t we talking about the glaring reality that acts of mass murder (and, indeed, every single kind of violence) are overwhelmingly perpetrated by men? Pointing out that fact may seem politically incorrect or irrelevant, but our silence about the huge gender disparity of such violence may be costing lives.
Imagine for a moment if a deadly disease disproportionately affected men. Not a disease like prostate cancer that can only affect men, but a condition prevalent in the general population that was vastly more likely to strike men. Violence is such a condition: men are nine to 10 times more likely to commit homicide and more likely to be its victims. The numbers are sobering when we look at young men. In the U.S., for example, young white males (between ages 14 and 24) represent only 6% of the population, yet commit almost 17% of the murders. For young black males, the numbers are even more alarming (1.2% of the population accounting for 27% of all homicides). Together, these two groups of young men make up just 7% of the population and 45% of the homicides. And, overall, 90% of all violent offenders are male, as are nearly 80% of the victims.
We shouldn’t need Steven Pinker, one of the world’s leading psychologists and the author of the book, The Better Angels of Our Nature, to tell us the obvious: “Though the exact ratios vary, in every society, it is the males more than the females who play-fight, bully, fight for real, kill for real, rape, start wars and fight in wars.” The silence around the gendering of violence is as inexplicable as it is indefensible. Sex differences in other medical and social conditions — such as anorexia nervosa, lupus, migraines, depression and learning disabilities — are routinely analyzed along these lines.
For millennia, human society has struggled with what to do with young men’s violent tendencies. Many cultures stage elaborate initiation ceremonies, presided over by older men, which help channel youthful aggression into productive social roles. But in contemporary society, we have trouble talking about the obvious: the transition from boy to man is a risky endeavor, and there can be a lot of collateral damage.
(Skeptics will claim that the perpetrators of horrific acts like the Aurora shootings are such aberrations that we can hardly build public policy around their evil behavior. But it’s a mistake to view mass murderers as incomprehensible freaks of nature. For example, we know that the young men who go on murderous rampages are not always sociopathic monsters but, rather, sometimes more or less “regular” men who suffered from crushing depression and suicidal ideation.
No reasonable person can imagine how despair could possibly lead to premeditated mass homicide. However, the fact that depression is so frequently accompanied by violent rage in young men — a rage usually, but not solely, directed at themselves — is something we need to acknowledge and understand.
Our refusal to talk about violence as a public-health problem with known (or knowable) risk factors keeps us from helping the young men who are at most risk and, of course, their potential victims. When we view terrible events as random, we lose the ability to identify and treat potential problems, for example by finding better ways to intervene with young men during their vulnerable years. There is so much more we need to learn about how to prevent violence, but we could start with the sex difference that is staring us in the face.
Erika Christakis, M.P.H., M.Ed., is a Harvard College administrator who blogs at ErikaChristakis.com. The views expressed are solely her own.
Gun Violence in America II: Is Anybody Listening? Does Anybody Care? Huffington Post
Posted by Lauren Raine at 8:26 AM

Great and insightful article...and sobering statistics. Thanks for posting.