For fear of offending whoever may be locally reading this blog, I have to say that, although Tucson has a major university, 3 community colleges, all with art departments, the Art Institute, and the University of Visual Arts as well, Tucson's Arts District is pitiful.  The so-called "Downtown Arts District" may be sprouting condos and nightclubs, but there's hardly a gallery left compared to the 80's.  It was far more lively 25 years ago, even though Tucson had, literally, half the population.

Tucson is always bringing in "experts" with big budgets to "develop" the downtown arts and culture district (for example, the multi-million dollar "Rio Nuevo" project, now defunct) and nothing ever really changes.  Storefronts with landlords who get tax breaks sit empty waiting for property values to go up, and those promised low rent live/work warehouses are ever elusive.

I've said it many times, and I know it will never happen.  But if Tucson really wanted a lively downtown Arts District, make the storefronts and warehouses now sitting empty available to artists and arts groups by subsidizing the rents, and Voila!  You'll have a world class Arts District in about 3 weeks, and cafes, little bookstores, and non-profits would sprout up like daisies along side it.  Within 5 to 10 years, the area would be so interesting that artists, having demonstrated that they have some monetary value, could be kicked out by property speculators and in no time at all those storefront galleries would be full of Starbucks and the Gap.   A true success story. 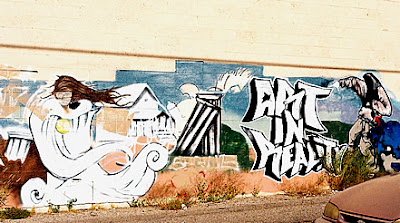 Everyone knows that Tucson was never much in the way of an "arts market".  Abounding with artists, everyone knew 25 years ago,  and now, that the chance of selling work was pretty minimal, and artists who hoped to do so went to Santa Fe, Phoenix, or Los Angeles to find galleries.  But money is not (contrary to contemporary wisdom) the only reason people create.

Certainly, Property speculation is intrinsic to our economic value system. But what about community goodwill speculation? Creativity speculation?  When the Muse Community Arts Center, a former YMCA building that housed my studio years ago went down, never to return, I had to wonder:  what equity did the people who inhabited the Muse get for raising the "monetary value" of a neighborhood by, in essence, raising its energy? People came to the Muse because what went on in the Muse was interesting, exciting, innovative.


There is a nonprofit in Phoenix called Arizona Citizens for the Arts. The organization is described in it's website as "the charitable arm of Arizona Action for the Arts (that) increases discussion and awareness of the importance and impact of the arts in achieving quality of life, educational excellence and economic health for all Arizonans and Arizona enterprises." While I am glad such an organization exists, there is also something  disturbing to me about the notion that we need charities devoted to convincing Americans that art and creativity is something that can, just maybe, contribute to education and the quality of life. Is it no longer obvious? Do the arts now need to be justified because they can make money, providing "economic health" and accommodating, in some fashion, capital "enterprises"? What is "real value?" Can we can no longer justify even the creative impulse, the masterful creation of beauty, and the healing depths of self-expression - unless we are convinced they can make money? What, then is "real value"?
Anyone knows that genuine innovation in the arts, theatre and literature rarely "makes money", at least in its inception, largely because it is exactly that, innovative.  Jackson Polluck's canvases may stand out on Sothby's auction block now, but not when he was alive and making them.  Ranier Maria Rilke may be studied in universities across the country now, but he died a pauper.  And so on and so on............innovative creators need community, synergy, discussion to thrive, share ideas, inspire each other.

Well, end of rant.  I ran a gallery/studio when I lived in Berkeley and had a lot more money, and I'm glad I was able to.  I know it's unlikely that I'll be able to afford to do it again, there  or in Tucson, and I've given up thinking about it anymore.  But do need to say, to anyone who will listen in these wobbling times, that the arts are the soul of any given community, and of any given civilization. They embody the conscience, the aesthetics, the history, and often, the future of an evolving culture. They celebrate what is best in the human experience, our highest aspirations and our complex human diversity.

Can't resist sharing, while I'm thinking about art and real estate, an excerpt from this great article, which was written about 2000 by Rebecca Solnit. 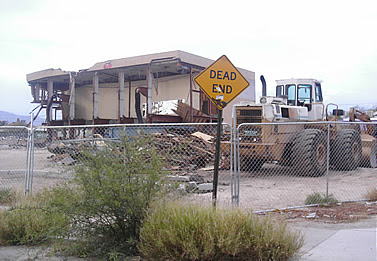 "... in the future there may be very few artists, at least artists whose origins are middle class, not because the urge stirred up during the postwar era has died down, but because the circumstances that make it possible to make art—or at least to live modestly with access to the center—are drying up..... On my least cheerful days, I imagine a nation in which those who have something to say have nowhere effective to say it. I went to Seattle to protest the meeting of the World Trade Organization, and where my bohemian friends can now afford to live is much farther from downtown than it used to be, when they lived in now-gentrified-by-computer-capital Capital Hill.

It may be that artmaking will become like blue-collar American jobs—it’ll be relocated to places where it can be done more economically: to Marathon, Texas; Virginia City and Tuscarora, Nevada; Jerome and Bisbee, Arizona, just to name a few remote places to which artists have been migrating. Artists in small towns could become the equivalents of maquiladora workers, making goods for an economy in which they cannot afford to participate. It may be that cities have raised, so to speak, their admission fees—by obliging those who wish to stay in a city like San Francisco, for example, to join the dot.com economy, or an equally flush sector. But paying that fee—as Carol Lloyd almost admits—might mean abandoning the values and goals that brought one to the city in the first place and that perhaps made the city livelier, more tolerant and generous-spirited, than the suburbs and small towns one came from.

Cities can probably keep their traditional appearance as they change fundamentally at heart, becoming as predictable, homogeneous, and politically static as the suburbs and gated communities. Those who can afford both to make art and to reside in the center will come with their advantages in place, and much good work might be produced; but work critiquing and subverting the status quo might become rarer just when we need it most. Art won’t die, but that longstanding urban relationship between the poor, the subversive, and the creative called bohemia will.

For a long time it seemed that the death of cities would result from the decline of public space; but it may be that the disappearance of affordable private space in which public life is incubated will deliver the fatal blow. At least, it looks that way in San Francisco.

2. The eviction of American Indian Contemporary Arts was covered by the San Francisco Chronicle and, on December 15, by the San Francisco Bay Guardian, which reported that the monthly rent will increase from $3,500 (AICA’s rent) to $10,000 (what the new tenant, Financial Interactive, will pay). "

Artists, writers....how did it all become about just making $? Good post, Lauren.

Well said... by both you and Solnit. I remember when Providence and Pawtucket, RI were starting the "arts disctricts". The Providence one actually had some merrit, thanks to the overpopulation of artists post-RISD and who migrated from NY for affordable lives. But my studio in Pawtucket started to get inundated with Graphic Design companies, Industrial Design, Clothing Design, Comercial Photographers etc. etc. and the building managers thought they were contributing to the arts district idea. And, of course these were creative businesses, but, they were businesses. And once they started streaming in and taking over the studios next door, well then, painters, sculptors, and everyone else started to be pushed out. So it seems to go. I left Providence and my studio in Pawtucket as this was happening, so I don't know where painters and sculptors are now... I'm curious cause those loft buildings were awesome while it lasted. I paid $250 for an 1,100 sq ft space, it was affordable as my apartment was $500 a month!

Thanks to both of you for your comments. This is an issue few think about "cultural creatives" who are increasingly frustrated by, so to speak, the "loss of habitat". And yet I think it's important to see how this "soul loss" is yet another way we are losing what really matters.