"This gold plaque from Rhodes (7th Century BCE) portrays a powerful goddess of the natural world.  Myths and reality converge in the mysteries of bees.  The facts of their life cycles and behaviors provide the basis for stories of communication, prophecy, healing, and rebirth.  The founders of ASWM have chosen this image to represent the rich harvest to be gathered when women collaborate and communicate to promote understanding of women’s ancient myths.  The Bronze Age bee goddess also reminds us of our essential connection with the stories of all creatures, and our need to ensure their continued survival."

Speaking of "Pollinators", note the Melissae, or Bee Goddess on the logo of the Conference I just attended with my collaborator, Macha Nightmare.  (The name "Deborah" or "Devorah" also means "bee", and probably derives from a time when there was also a bee deity among the Semites).  I was not thinking of the logo for the Conference when I wrote the previous article about "Pollinators", but after attending the conference, I see now why I was thinking of this.  I love it when I find myself entrained with other minds and creators.......like a bee, you discover you participate in a kind of collective consciousness, and you don't even know it!  Abby Willowroot, creator of the Goddess 2000 Project, once said that she was sure she had a collaborator who lived in New Jersey, and she would probably never meet him.  She was only half kidding.

I have to say that the  Conference was amazing, and I felt very honored to be there among such an august company.  People who have informed my world view since college, among them Charlene Spretnak, Vicki Noble, D'Vorah J. Grenn, Marna Hauk, Joan Marler, Max Dashu, Jean Shinoda Bolen, Ana Castillo, Miriam Robbins Dexter, Annie Finch, Judy Grahn, Patricia Monaghan, Luisah Teish..........so much packed into only two days, so affirmed to hear the words of these women who have spent a generation pollinating a new paradigm for the future.

My understanding of the importance of the kind of re-mything these scholars, teachers, artists and mythologists are doing was renewed.  I believe it's urgent for our time, because it's about re-membering when the Earth was not a "resource", but the body of the Deity, the Great Mother.  That re-birth of the Great Goddess is about bringing balance , healing, and perhaps survival itself.  Re-ligion derives from a Latin word, religios, that meant to "link back", to re-connect, re-weave, and mythology/religion form the templates upon which civilizations, and individual values, are formed.

The scholars who have devoted themselves to re-discovering and imagining ancient cultures of the Goddess are not saying we can return to a time that existed 5,000, 6,000, 7,000 years ago.  But by understanding what was, might have been, by seeing the submerged strata of artifacts, symbols and archetypes upon which contemporary mythos has been built, we can imagine and re-myth into the 21st century stories and theologies that are appropriate, and inspiring,  for the time we live in, its crisis, and its potential for great transformation.

The "Her-story" these brave pioneers have unearthed is so important, and I am appalled at how little attention their work receives.  So many people are devoted to trivializing and denying their work, just as women's work in general is trivialized and denied.  Gender imbalance is deeply embedded in our culture, so deeply embedded that it takes courage to dig deep into mythic substratum of the collective unconscious.  Another way of putting it is......institutions and individuals in power rarely release power-over without conflict and upheaval.  In this country male slaves were freed, and allowed to vote, some 60 years before women of any color were granted that right, and only after the women themselves rose up and demanded it.  That's well worth thinking about as we face, once again, patriarchs in Washington who would like to deny women birth control.

I especially enjoyed the talks on Archeomythology, and the evolution of Marija Gimbuta's work on old Europe.  This is such a new field, a cross-disciplinary approach to understanding ancient sites and cultures that Gimbutas and her colleagues developed.  I find it truly paradigm changing, like looking at the world through an entirely different lens.

Some of the speakers,  among them the amazing Mirium Robbins Dexter, were also quite funny when they pointed out some of the prejudices of prevailing academia.  For example - the ubiquitous neolithic female figurines, with their round breasts and vulva shapes, or  sometimes a pregnant belly.  They point out that until recently they were (and still are) viewed as "fertility fetishes" or even a kind of pre-his-storical pornography.  Shift the view, and it's easy to see that they were, in all probability, like crosses or the Star of David are today, images of the deity herself, the regenerative  Earth Mother, sacred images. 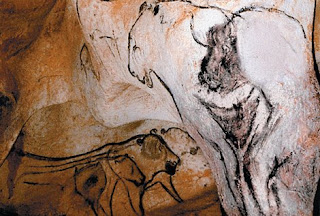 In the  2010 film Cave of Forgotten Dreams  ,   Werner Herzog  followed an exclusive expedition into the nearly inaccessible Chauvet cave in France, which houses the  most ancient visual art known from the upper Paleolithic era.  Why did these  ancient artists create these spectacular paintings of lions, horses, mammoth and other animals deep within  sacred caves?  Mirrium Dexter pointed out that the only human image within the site is a female lower torso, or vulva form......the bull image was painted above it a later time.  Although it's never commented on in the movie, or in most discussions of the cave and its sacred paintings,  Dexter suggested that the symbolic act of  painting and honoring the animals within the cave was because the cave represented the womb/tomb where the magic of rebirth occurs, and by the act of honoring and representing  the animal powers which were both allies and sustenance for these ancient peoples, they were offering them for re-birth within the cave/womb of the Great Mother.  Hence, the vulva form, and later, the images of  breasts, belly,  and vulva forms, symbols that occur as the earliest images of  the human body.


By viewing the ancient world through a lens different than the traditional eye of patriarchal prejudice we see that the entire landscape was  sacred, and to enter the Temple, or the Cave, was to enter the body of the Mother who gave life, death, and rebirth.  While we cannot know what exactly these ancient peoples thought or did, we can imagine, and bring forth into our time, the meaning of a sacred landscape, a sacred Earth, wherein the profoundly interwoven processes of life are revered.  To understand archeomythology is to enter a mind that mythologized the landscape in order to have an intimate, immanent relationship with the landscape, the living world.

More thoughts from the conference later.

This to offer you my best wishes for good health and prosperity (as you define it). I wish I had the energy to do more than hope, pray.....At any rate, wonderful, intense work. Thank you.....pajamas

Great post. I think we saw that Herzog film, but are going to take another look!

Good to hear from you both, and thanks so much for your comments and kind wishes.

I think living a good life and offering our prayers to the world and the future is powerful medicine, Pajamas.

Lauren,
Those masks are incredible. Thank you for sharing them with us.