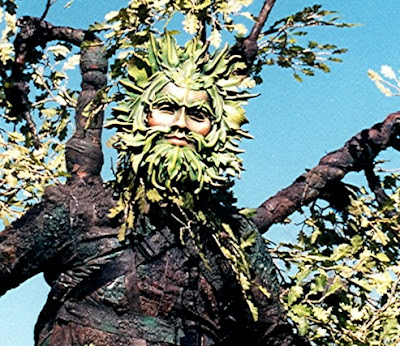 Farewell, and Thank You, to the Faire!

I know I've threatened to finally retire before, but honest, this time I really mean it!  But I had to stick around for the 50th Anniversary in 2012 of the first Renaissance Faire, here in Southern  California.

50 years!  As a true Rennie veteran, I have to say, go figure.  Who would have thought that Phillis and Ron Patterson's passion for history and participatory theatre, and the need to raise a little money for alternative radio station KPFA.........would have become hundreds of Renaissance Faires around the country, and a multi-million dollar international business?

I did my first Faire in 1970, when I was living near MacArthur Park in L.A. and wandered into an interesting group of people doing some interesting dancing.  Somehow I entered the circle of dancers, and found myself part of a Renaissance Country Dancing troupe.  Before I knew it, I was headed for Northern California, and camping out each weekend in a historical tent with the troupe as we performed. In those days everyone stayed in character, and  I don't think I'll ever forget the night we were too rowdy and in the midst of our noisy merriment, the flaps to our tent parted.  There stood a black figure holding a candlelit lamp.  In awed silence we heard him say:  "Thou dost disturb the peace!"  Busted by the Sheriff of Nottingham!

Many years later, in the course of my strange career, I might add that I had an affair with the Sheriff of Nottingham, and married Robin Hood.  Not to mention the Pied Piper, bless his heart.

When I finished graduate school, I planned on becoming a professor of art, but somehow, I ended up joining the circus, so to speak, instead, when I re-joined the New York Renaissance Faire near Tuxedo Park...........a former botanical garden, ah, what magical summers we had there!  We would arrive the first week of July, to open the show in early August, camping, building our booths, nights spent around a campfire area we called "the Gypsy Camp" that always had music, drums, and conversation.   Such a magical place that was.......above the site there was a rather steep hill with a circle of stones, placed by unknowable ancients, a circle that marked a series of ley crossings. The stones were big boulders, and although some were out of alignment through the passage of time, the circle was clear to see, with a center stone that had veins of white quartz.    If you held a divining rod above the center stone, it "helicoptered".  We, of course, dubbed it "Spirit Mountain", and many would spend the night there on our improvised vision quests.  It was good to know that this place had once been sacred to native peoples. 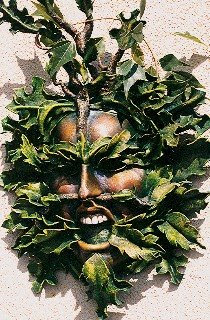 Heck, we would have done it for free in the early years, and a great many of us did.  The sense of community, and creativity was so wonderful!  We made magic, and that was what the public came for.  Our booths were works of art we re-created each summer.  I remember, for example, Pam Tyrell's "De Luna Designs" booth, which she spent all of July creating, and usually most of her profit as well.  She would set up her dye pots under an amazing structure of woven sticks and painted velvet.    And Dellie Dorfman's "Pragmatic Enchantments" booths were woven works of forest art.

It was our custom to open the Faire with a blessing.  Many, but not all, were Pagans, and the "Psychic's Row" section (I was a reader for a while) had many spiritualists.  So we would gather around an old tree stump that marked a circle not too far from the entrance to the Faire, and with music (sometimes bagpipes), flowers, and chanting we would bless the day for all while patrons waiting at the gate waited to enter the Faire.  It says something about the corporate mind that a few years later we gathered once more, on the first morning of the opening weekend of another year's faire to see a group of actors, including several black cloaked "witches" complete with pointy hats and a fake cauldron, gathered around our stump, enacting a drama about witches and sheriffs.  Such irony, and of course, that put an end to our blessing.  Strange. 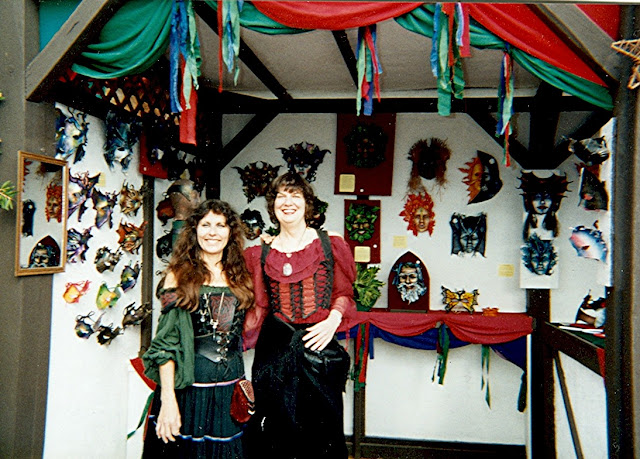 My friend Joyce Weiss at the Arizona Renfair

Here's a great story from those years in New York, and to the best of my knowledge, no one made it up, since I heard it from those involved.  Believe me, Magic is Afoot quite often, but you have to notice it.

Carol "the Fairy Lady" made "fairy environments", big bell jars that enclosed the beautiful fairy figures she made in environments of moss and flowers.  One morning one of the women who did face painting was in her booth, standing fascinated with a friend before a particular jar.  She told Carol that when she made some money at the end of the day, she wanted to purchase it.  At Faire's closing she was back.  "What happened?" she asked Carol.  "What do you mean", she replied, "I didn't sell that piece".  "But there were two fairies in it!" the face painter said, disappointed, and her friend, standing beside her,  echoed her statement. 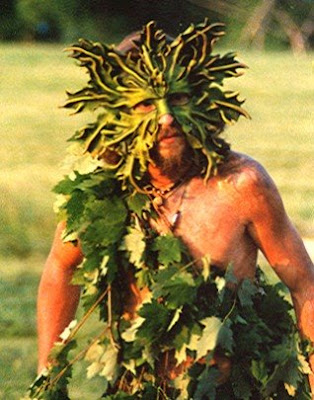 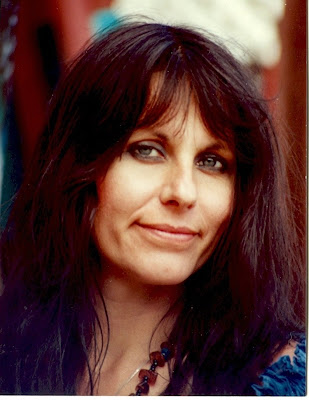 Me when I was younger and, alas, thinner, during the New York and Maryland Renfair years
One of the many mask makers I've taught is Elise "Peggy"  Linich and her Satori Masks.  To my credit, I can say that just about everyone who's ever worked for me or with me now has their own mask business, and my own designs have become, well, generic.  I guess my claim to fame is that I was one of the first mask makers on the circuit to create masks based on pagan mythology.  Certainly, I've populated the world with Green Men and Goddesses - it was a messy job, but somebody had to do it. 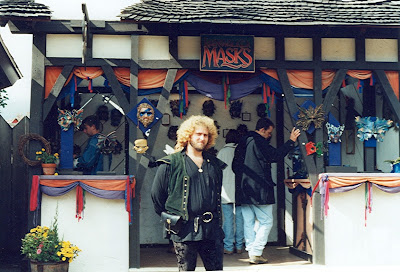 Rob Fletcher in Maryland
I've seen "faire brats" grow up and become parents themselves.  In Maryland there is a grove of trees planted for Rennies who have died over the years, and for sure I've seen quite a few weddings.  Time has come for me to say thank you,  many times thank you, to the places and people I've loved and met and danced with on the road. I've lived in "Brigadoon", and watched the villages rise and disappear through many seasons.  I really am retiring this year, honest........and I'm so glad to have been there.  Huzzah!


"And we'll all go together, to pull wild mountain thyme
all along the purple heather, will ye go, laddie, go?" 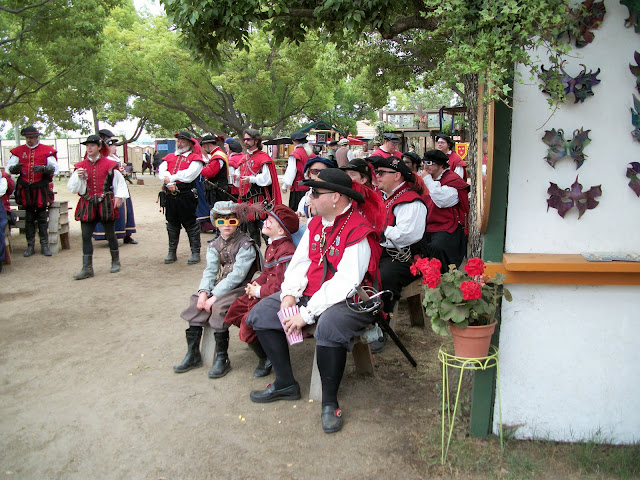 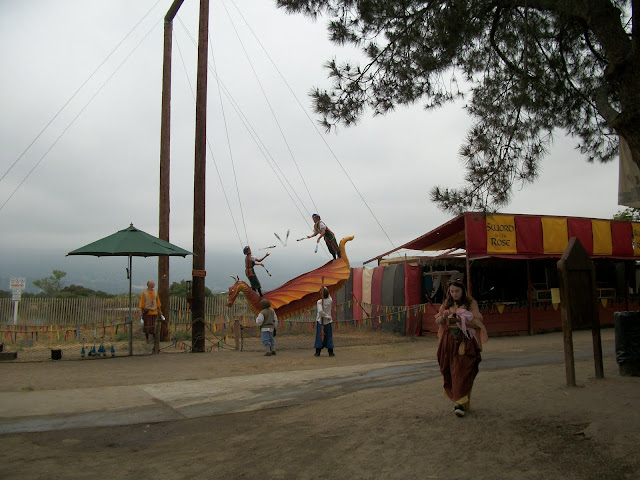 In remembrance and gratitude: 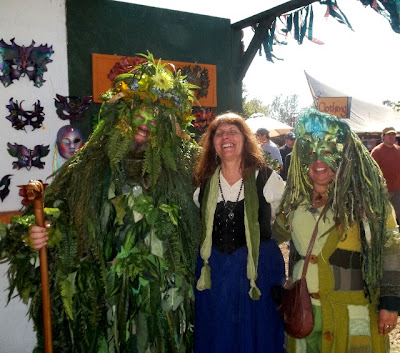 You're a stunner, Lauren! Love all the pics and the history.

hello Lauren,
your work is beautifull and so is this story :)
thanks to share those amazing moments with us :)

I'm looking for a women who made a beautifull mask of a tree man. You will see a picture of it on deviant art, here : http://stock4us.deviantart.com/art/Lormet-Masks-0762sml-406338539

do you know the name of this artists ?

Have a beautifull year :)
Nathalie from france

Thanks for your kind words. I made all the masks shown there.......I was going to leave a comment on the site, but I don't like to have to "join" all these sites, and leave my age and birthday and all that intrusive nonsense.