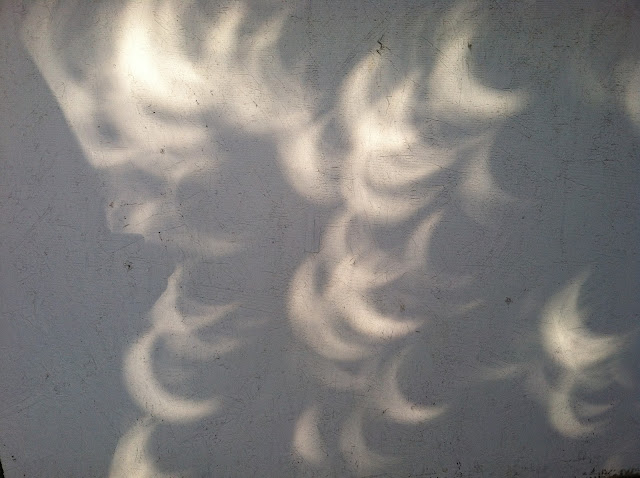 The solar eclipse happened the last hour of the last day of the Renaissance Faire this year, just as I was having a bit of my own "retirement party".  This photo is the white wall of my booth, where crescents formed of the sun being eclipsed.  I take it as auspicious,  and  entirely magical.

It was an extraordinary thing, to see such a crowd of people gathered before the white wall, in the midst of all the revelry, awed and even silent, before this strangely beautiful, and frightening, cosmic event.  The light, eclipsed, vanishing, how can this be?   Beneath the surface, surely there was in each face just a moment of  primal terror  - the Sun, the Sun King, is He leaving us?  Will He not return?    A pause, even there and even then.  And then, gradually, a great sigh of relief, a shout within the shout of the crowd.......to see Sun was returning, was not leaving us after all.   A profound moment. 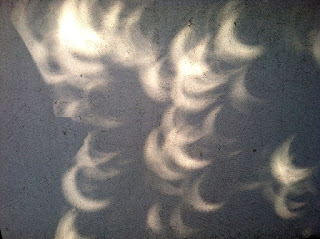 Not more slowly than frayed
human attention can bear,
but slow enough
to be stately, deliberate, a ritual
we can't be sure will indeed move
from death into resurrection.
But then, obscured, the whole sphere can be seen
to glow from behind its barrier shadow:  bronze,
unquenchable, blood-light.  And slowly,
more slowly than desolation overcame, overtook
the light,
the light  is restored,
and humans turn off their brief attention
in secret relief.
the familiar, desired,
disregarded brilliance
is given again,
given and given.
from Denise Levertov, "Mass of the Moon Eclipse"
This Great Unknowing:  Last Poems,
1999, New Directions Press
Posted by Lauren Raine at 9:56 AM

Solar eclipses are always potent,and this one, I think, bodes well for obama's re-election. There's a magical quality about any eclipse and this one is positive, Take it, run with it.