"I experienced contact with something or someone sentient and much greater than my individual self. I had experienced contact, even momentary communion, with the "essence" of what could be called a transpersonal presence. Afterwards I was told by the local shaman or caretaker that I had met with the guardian spirit of the place.""
Debra D. Carroll "From Huacas to Mesas"
DIALOGUES WITH THE LIVING EARTH, compiled by James and Roberta Swan (1989)
I was reading the above article by Debra Carroll, an expressive arts therapist from an important (and sadly obscure) book by the Swans, published in 1989. Within her article, I found a wonderful description of a visionary experience she had with the "Spirit of Place" at a site she visited in Mexico. I was equally enthralled by a story she quoted by someone called Martin Gray, in which he described his own experience in Japan. I was moved enough to earmark the book, and I pulled out my yellow marker just to be sure I held them in memory. Ms. Carroll described Mr. Gray as a "pilgrim".*** Because "pilgrim" embodies, I think,  the humility necessary to approach a sacred site, or perhaps any place with its myriad beings and ecosystem, with a willingness to listen.
I have a story as well,  I've told it before, but it's good to tell it again.  It still haunts me.

In 1992, I was living with my former husband on 40 some acres in upstate New York. Where we lived was a rural area rapidly being built up with new housing and industry. One of the mysterious places in the area, to me, was a field I used to go to. To get to that field, which bordered our property, one had to go through a kind of obstacle course - crossing an old stone wall, you immediately ran into a rusted barbed wire fence, and then tramped through a nasty barrier of poison ivy, grape vines and small trees. Braving all of this, an expanse of field appeared.

Bordered on all sides by trees, you could stand there in the tall grass, or the snow, and see nothing of the warehouses or homes nearby. It felt, oddly, as if it was somehow protected, as if you entered a special, quiet, mysterious place. The land had obviously once been worked, but it had been left fallow for many years. In the center of the field  I perceived a "fairy circle".....small trees, bushes, even tall grasses formed a loose circle, if one looked. With my divining rods, I found there was a ley crossing in that exact spot - the rod "helicoptered" and whirled at the center of the "fairy ring".   We came to revere the THE FIELD as magical.

My ex and I were actively involved in Earth based spiritual practices, and he facilitated a lively men's group. One night when the moon was full the group, energized by shamanic drumming, decided to visit "THE FIELD".  It was November, and there was snow on the ground.  I was not present, but my husband told me that as the young men strode to the stone wall, something pushed two of them backward into the snow!

Being young men, they got up and aggressively thundered forward - and something again pushed both of them backwards! They fell on their behinds in the snow.  This (I was told) was enough strangeness for everyone, and the party turned around and went back to the house.  The next day, my husband and  I took offerings to the place where one entered "the field".  We came to believe the place had a guardian spirit, what the Romans called "Numina".   I remember placing crystals and flowers on a stone by the old stone wall, and as I did, I felt such an overwhelming sense of sorrow that tears ran down my face and would not stop. I was, for that moment, the empathic medium for something that  lived there. I believe what I felt was  the sorrow of the guardian spirit of that place, and I think that field was a sacred site of some kind, perhaps special to native peoples long ago in some way.

The encroachment of industry and the loss of habitat in that area was a sad fact.   A year later there was an oil spill in a nearby truck depot, and the wetlands that bordered "the Field" suffered  ecological damage, and a number of the old trees there died.  When I left the area, I bid the Spirits of Place there farewell, thanking them for so much beauty, for allowing us to be a part of that place.  I was saddened that this "secret garden" was surrounded by thoughtless and uncaring forces that might continue to invade its invisible walls, and prayed that others would come who might perceive the magic of the place.
I like to think we opened a portal there, a conversation if you will, because we were practicing ritual, and making art, that was about the earth. The spirits of that place responded to us, simply because we were there, and  we were listening. Reading  Debra Carroll and Martin Gray brought that time back  to me. 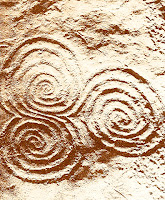 "There is an earth-based energy available to human beings, concentrated at specific places all across the planet, which catalyzes and increases this eco-spiritual consciousness. These specific places are the sacred sites discussed and illustrated on this web site. Before their prehistoric human use, before their usurpation by different religions, these sites were simply places of power. They continue to radiate their powers, which anyone may access by visiting the sacred sites. No rituals are necessary, no practice of a particular religion, no belief in a certain philosophy; all that is needed is for an individual human to visit a power site and simply be present. As the flavor of herbal tea will steep into warm water, so also will the essence of these power places enter into one’s heart and mind and soul. As each of us awakens to a fuller knowing of the universality of life, we in turn further empower the global field of eco-spiritual consciousness. That is the deeper meaning and purpose of these magical holy places: they are source points of the power of spiritual illumination.".........Martin Gray

***Martin Gray published  his monumental book Sacred Earth: Places of Peace and Power in 2007 with Sterling Publishing Company, Inc. of London based on his decades of travel to research sacred places throughout the world.   The author spent the last 20 years on a  pilgrimage: he visited 1,000 sacred sites in 80 countries around the world. His journey unfolds in a remarkable compilation of images that reveals just how devoutly pre-industrial cultures everywhere worshipped and respected our Earth. Gray’s stunning photographs and fascinating text provide unique insight into why these powerful holy places are the most venerated and visited sites on the entire planet. 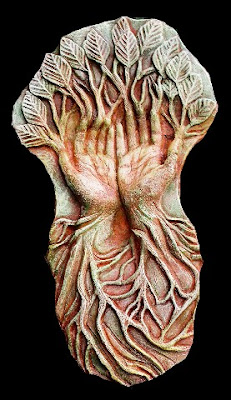 What a powerful story, Lauren! I've felt that energy in certain places - not s strongly as what you describe - but with a sense of foreboding, a deep sadness. And sometimes, I have felt the opposite, total joy.

Thanks to you both. I guess that's why I love the Roman word "numina", which meant exactly that, the spirit of place, the actual felt presence. That was the original source of the later humanized Roman gods and goddesses.