A Synchronicity from 2011: "Feed and Plant and an Angel" 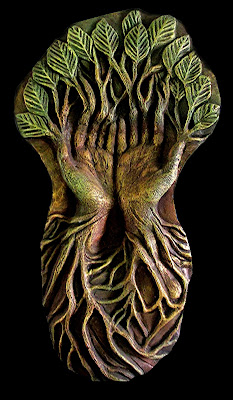 Sparrows and juncos, all hungry
they too are planters of trees, spreading seeds
of favorites among fences.  On the earth
closed to us as a book we cannot

yet read, the seeds, the bulbs, the eggs
of the fervid green year await release
Over them on February's cold table I spread
a feast.  Wings rustle like summer leaves.

I've been thinking a lot about how Synchronicity/Guidance Non-Local and Non-Temporal inspiration might work,  which of course greater minds than mine have puzzled over and come to various elegant conclusions!  I guess what ultimately arises, for me, is the image of the "Medicine Basket",  the woven  Container of one's life,  light and dark strands, making a pattern and a vessel.  A vessel full of mystery.
I find I look back a great deal these days, and have decided that is ok, that is appropriate, that is about both Grief and Gratitude.   I don't need to be "innovative" and "new".   My time of being "innovative" and "new" and "emerging" is probably over.   I need to learn to be wise, and to pay attention.
So here is a post from almost exactly 11 years ago,  and I can't believe I forgot all about this synchronicity and brief but magical encounter.  I never forgot that illuminated morning conversation with a man whose name I never learned, or if I did, it's not remembered now.  I do know that in the several years afterwards when I did the show I looked for him, but never found him again, and learned that he was a well known storyteller, and that he had died in 2012.  But he remains in my heart, a passing Angel who left me a gift of Grace.
"Feed and Plant"
April 20, 2011
I've been having tantrums lately, about feeling isolated and alienated and unsure of where to go or what to do.  I share these feelings, with an increased intensity and frequency, with many others these days.  The river is running very fast now.  The river is running like a torrent now.

I also tend to feel that tantrums, as long as they don't hurt anyone or become collectively a war or a riot.............can be very useful.  Children have tantrums;  eventually they exhaust themselves, and sometimes the tantrum's end is about learning new boundaries and maturity.  Tantrums for grownups can also not only vent, but reveal.  We spend so much time in our heads, in the "should be, used to be, would be, could be" realm of experience, which seems real at the time but usually isn't even mildly useful to the what is...... and meanwhile, as a wise angel who briefly turned up recently to set me straight said - "There's the NOW, patiently watching, saying 'well, are you done yet?"

Change is the only certainty.  The NOW is.

So I had something happen magically, that was profound for me.  Sometimes when these things happen, it's easy to say to yourself, "well, that's silly", but as that Angel ("Angelos", from the Greek, originally meant "messenger") reminded me, "you listen, so you noticed."

I was facing a three day weekend at the Renfair in Los Angeles, selling my masks alone now, and early in the morning went to my car to open the door and hit the freeway, costume and lunch in hand.  Tucked into the handle of the door was a piece of dirty white paper.   When I pulled it out, I saw that it was folded into one of those paper airplanes that children make.  And when I unfolded it, I saw that it had two words, block printed in pencil in a childish hand, one on each side of the paper.  On one side it said "FEED", on the other "PLANT".

"Wow, that's really strange" I thought, and tossed it aside.  Why would some kid put it there?  And on I went to the Faire.


As I was setting up in the blissful quiet before the stampede of merrymakers,  a participant, dressed in a nobleman's costume, with a great burgundy  hat against and a white head of hair, came by and we had one of those brief conversations that can seem divinely channelled.  He affirmed the value of my work,  and the continuity we participate in as creators, whether we remember that or not.   All the people who interact with my masks, all the people who now make masks and wear them.   I needed to hear that.  And   he also reminded me of the inevitability of change, the suffering that comes from not accepting the "what is" of the moment.  Tantrums we can have, or very real grief - but we still have to get up, open up, learn,  grow, and deal.


I have a wrapped quartz crystal - on the first day I gave an extra mask to a man who didn't have much money and wanted one for his partner.  He came back later and presented me with the crystal, which he had mined himself in Arkansas. What a splendid gift!  My angelic friend (I don't know his name) immediately noticed my crystal, and said it was to help me.  So the conversation led into the morning's synchronicity, my little "paper airplane".  I think, had I not encountered this person, I would have completely forgotten about it.

He commented that it was "Written in the hand of a child learning his or her letters, in pencil.  Basic.  Not like the abstractions we "adults" make.  Like the work of real farmers is basic, the ground that supports us.  Without their labor, without the alchemy and generosity of the land and the farmers, none of this" (he made an expansive gesture indicating the vast urban complex called Los Angeles we were standing more or less in the center of) "none of this would exist.  The farmers and land sustain it all.  All the "higher" sophistication of our civilization falls apart when the land fails to care for us, and the true farmers, not those chemical factories, but true farmers..........aren't understood."

I might add that I thought it was Earth Day, and I'd somehow forgotten. I was wrong, but I think that gives further weight to his observation. "Feed and Plant is a profound message for all of us.  Especially now."  And then we shook hands, wished each other a great day, and parted ways.  My energy had completely changed, and I stood there with my mouth open.

"FEED" and "PLANT".   All of my  alienation, loneliness, lack of purpose, all those grand complexities...... if Angels deliver the occasional message in the form of  grubby paper planes, and then send an occasional human representative just to make sure attention is paid - well. that's otherwise called Grace.   I may not be a farmer, but we can all be farmers, literally by planting and growing even if it's a window box, getting our hands in the Earth, connecting with the alchemy and gift of the Earth.  As a universal message, it should be Earth Day everyday.

We all can, and do, "plant".  As an artist, I can plant beauty, inspiration, I can encourage others to do the same.  I can recognize the "trees" I'm planting, and have planted,  in my life.  Feed yourself and others with what sustains and nourishes.  Plant seeds that will feed the future, plant seeds that will grow into trees.  It doesn't need to be complicated at all.  Even sparrows do it. 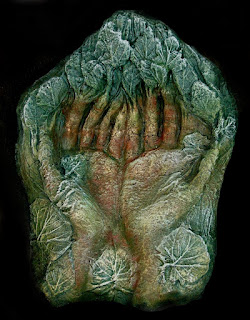 What a terrific and uplifting synchro, Lauren!