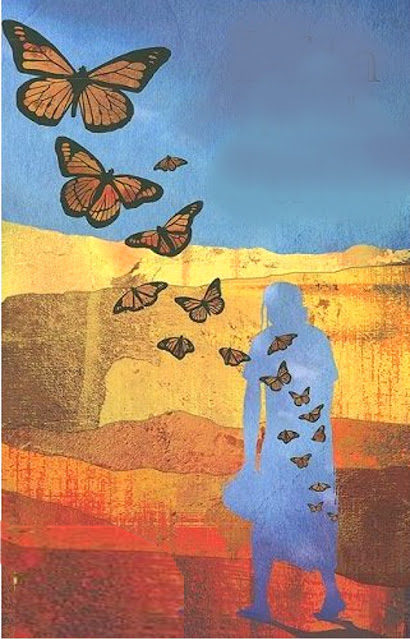 Here is a story I wrote a long time ago, at a time of great change.  I was in one of those liminal zones that can be so very transformative - I was living in a little trailer in the deserted grounds of the Arizona Renaissance Faire, months before it would open.  Just me, winter in the Sonoran Desert,  and my cat.  I had left my life in the East Coast, and had no idea, yet, where I would go next.  It had not revealed itself, the "direction of the road", and I was not ready to know yet anyway.  What I found that winter was the solitude and quietude I needed to open to a new life, and to bless and release the old one.   This little story came from that time..........

LA MARIPOSA
by Lauren Raine (1998)
Once upon a time, in a dusty village like any other village, a village with three good wells, fields of blue and yellow corn, a white church, and a cantina, there lived a woman who was neither young, nor old. She was brown of skin, and eye, and her hair was as brown as the sandy earth, and her clothes were brown and gray as well.
She was neither beautiful nor ugly, neither tall nor small, and she walked with a long habit of watching her feet.
One day, she saw a tree alight with migrating butterflies. Their velvet wings fluttered in the wind of their grace, and one circled her, coming to rest upon her open hand. She thought that her heart would break for the power of its fragile beauty, and she held her breath for fear of frightening it.  La Mariposa was as orange and brilliant as the setting sun falling between indigo mountains, as iridescent, as black and violet as the most fragrant midnight.
At last the butterfly lifted from her hand to rejoin its nomad tribe, and its wings seemed like a whisper that called to her: "Come with us, come with us..."
The next morning they were gone. She held her hand out to the empty tree, as if to wave farewell, and saw that where the butterfly had rested, there remained a dusting of color, yellow, like pollen, the kiss of a butterfly wing. And she thought something had changed.
She went to the well to draw water, and saw her face reflected there. She was not the same - there were now minute lines, hairline cracks, along the sides of her face, at the corners of her eyes. Later, she noticed little webs of light beneath the sturdy brown skin of her hands, barely visible except in the dim twilight. This was a frightening thing. She drew her skirts more closely around herself, pulled her scarf over her eyes. But as time went on, there was something that kept emerging, something that would not be denied. She was peeling open.
At first, it simply itched, like a rash, like pulling nettles.  But as weeks went by, what had been easily born, what could be endured, became painful, became an agony. Try as she might, as tightly as she wrapped herself in her cocoon of shawls and skin and silence, as tightly as she wrapped herself within the comforting routines of her life, still, colors emerged from her hands. Colors spilt from her mouth. Colors and tears, deep waters that seeped from within, washing away the dust of her life.
Soon, sleep became impossible. Standing by her window one day, shivering, she shook with fear. "Please help me", she cried, "I'm not the same".
Then she noticed a beam of sunlight that fell across the floor of her little room like honey. Motes of dust gathered in the golden light, becoming a flurry of butterflies. Butterflies, dancing through an open window, a window opening into a sky as blue and as vast as forever.
And La Mariposa opened her arms, took the gift of wings, and rose.
When her neighbor came to walk with her that evening, she found only a dusty shawl and an old brown skirt upon the floor, the early stars glimmering through an unshuttered window. 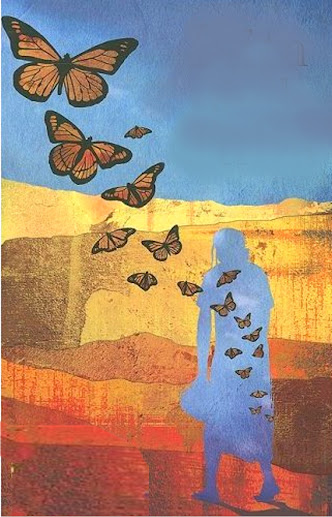 Oh yes woman you are as wonderful a writer as you are a sculptor. Just in awe if your beautiful skills and creativity!