Why We Need the Dark - Solstice Reflections

"We’ve rolled back the night so far that soon we will come full circle and reach the dawn of the following day. And where will that leave us? In a world with no God and no wolf either — only unrelenting commerce and consumption, information and media ... and light. We need a rest from ourselves that only a night like the winter solstice can give us."

A post from 2017 I felt like revisiting - as always, my thoughts, particularly at this time of year, turn to "Endarkenment" as the Balance and partner of "Enlightenment".  :

I remember a winter night many years ago, when I lived in the country in upstate N.Y..   I shared a house with a second story living room that had a big picture window,  A  mid-winter snowstorm had left us stranded in a shimmering blanket of snow.  One could look out on that field of white, illuminated by the dark sky, the moon, and an occasional star,  into a vast,  dark silence.   For a while the lights went out, but we had no shortage of candles, and somehow that makes the memory even sweeter for me.  The intensity of the dark and the silence the snow that long ago December was not frightening, but intimate,  a landscape for sleep, for the incubation of dreams, a place to heal from the frenzy of achievement and obligation, a darkness ripe with dormant life.  A place where we could lie together in the warmth of our bed, becoming aware of  the occasional sound of snowfall, or an animal moving outside.

I remember recently seeing a time lapse film of cities - vast networks of light, sky scrapers and traffic rushing along freeways like blood coursing along arteries, and I was struck by how much it looked like some kind of organism frenetically pulsing and extruding itself and consuming everything around it.  The truth is, it had a terrible beauty - the shimmering, glittering urban  triumph of humanity over nature, over the darkness.  Or is it truly "triumph"?  How is it possible we have so forgotten that we are not the conquerors of nature, but part of nature?  Have we failed to see, in our blinding pursuit of speed and of "illumination" that we are also animals, participating in the cycles and seasons of the life of Gaia, needing rest, incubation, renewal, and the sweet silence of the dark.

In the years since, I have so often thought of those winter nights.

I  take the liberty of reprinting here a wonderful article by Clark Strand, whose book is well worth reading.  He has had such nights too, of that I'm sure. 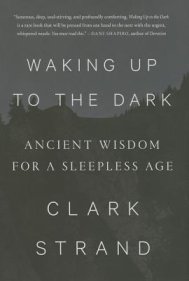 Bring On the Dark:  Why We Need the Winter Solstice

WOODSTOCK, N.Y. — WHEN the people of this small mountain town got their first dose of electrical lighting in late 1924, they were appalled. “Old people swore that reading or living by so fierce a light was impossible,” wrote the local historian Alf Evers. That much light invited comparisons. It was an advertisement for the new, the rich and the beautiful — a verdict against the old, the ordinary and the poor. As Christmas approached, a protest was staged on the village green to decry the evils of modern light.

Woodstock has always been a small place with a big mouth where cultural issues are concerned. But in this case the protest didn’t amount to much. Here as elsewhere in early 20th-century America, the reluctance to embrace brighter nights was a brief and halfhearted affair.

Tomorrow is the winter solstice, the longest night of the year. But few of us will turn off the lights long enough to notice. There’s no getting away from the light. There are fluorescent lights and halogen lights, stadium lights, streetlights, stoplights, headlights and billboard lights. There are night lights to stand sentinel in hallways, and the lit screens of cellphones to feed our addiction to information, even in the middle of the night. No wonder we have trouble sleeping. The lights are always on.

In the modern world, petroleum may drive our engines but our consciousness is driven by light. And what it drives us to is excess, in every imaginable form.

Beginning in the late 19th century, the availability of cheap, effective lighting extended the range of waking human consciousness, effectively adding more hours onto the day — for work, for entertainment, for discovery, for consumption; for every activity except sleep, that nightly act of renunciation. Darkness was the only power that has ever put the human agenda on hold.

In centuries past, the hours of darkness were a time when no productive work could be done. Which is to say, at night the human impulse to remake the world in our own image — so that it served us, so that we could almost believe the world and its resources existed for us alone — was suspended. The night was the natural corrective to that most persistent of all illusions: that human progress is the reason for the world.

Advances in science, industry, medicine and nearly every other area of human enterprise resulted from the influx of light. The only casualty was darkness, a thing of seemingly little value. But that was only because we had forgotten what darkness was for. In times past people took to their beds at nightfall, but not merely to sleep. They touched one another, told stories and, with so much night to work with, woke in the middle of it to a darkness so luxurious it teased visions from the mind and divine visitations that helped to guide their course through life. Now that deeper darkness has turned against us. The hour of the wolf we call it — that predatory insomnia that makes billions for big pharma. It was once the hour of God.

There is, of course, no need to fear the dark, much less prevail over it. Not that we could. Look up in the sky on a starry night, if you can still find one, and you will see that there is a lot of darkness in the universe. There is so much of it, in fact, that it simply has to be the foundation of all that is. The stars are an anomaly in the face of it, the planets an accident. Is it evil or indifferent? I don’t think so. Our lives begin in the womb and end in the tomb. It’s dark on either side.

We’ve rolled back the night so far that soon we will come full circle and reach the dawn of the following day. And where will that leave us? In a world with no God and no wolf either — only unrelenting commerce and consumption, information and media ... and light. We need a rest from ourselves that only a night like the winter solstice can give us. And the earth, too, needs that rest. The only thing I can hope for is that, if we won’t come to our senses and search for the darkness, on nights like these, the darkness will come looking for us. 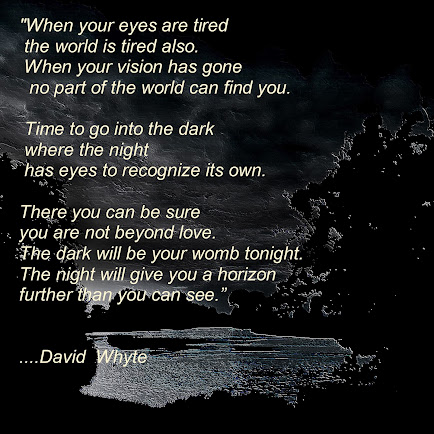 There is a wonderful youtube video by Lina Grace that is her telling a story, part of which is about a long winter rainstorm during which all people can do is sleep, for weeks. It's absolutely beuatiful, and it puts you to sleep.

Beautiful, all of it!