A recent short interview with SHOUT OUT ARIZONA - pleased they gave me the opportunity!

Why did you pursue a creative career?

I don’t think I had any real choice in the question of why I became an artist. Ever since I was a child I just made art, and I saw no reason to give it up when I became (in theory) an adult. A reporter asked Picasso, at 90, what he considered his greatest work. His response? “The next one!”

Being an artist was my “real job”, and I supported it in whatever ways I could. I could say quite a few things about what I think creativity is, but ultimately I suggest that some people have an innate passion for self-expression in the arts, and will never really find fulfillment unless they follow that path. Which often, but not always, means making sacrifices of time or income, as well as having to look “outside the social/cultural box” to find creative integrity. It’s nice if one is fortunate enough to make money along the way, but that cannot be the definition of success.

The writer Ursula Leguin wrote that our world needs what she called “realists of a larger reality”. “the name of the beautiful reward”, she said, “is not profit. Its name is freedom.” I believe it’s vital for artists to remember that we are myth makers, “pollinators of the imagination”. Throughout history, artists of all kinds have possessed the imaginal tools to invent and re-invent the myths that were the cultural underpinnings for their time. That is the career, the profession.

From that perspective, one might ask: “what are the new stories arising that can help us to evolve into a wiser, sustainable world? What injustices need to be addressed, what visions call for expression?” And further, how can they be brought fully alive in ways that have vitality and impact? I am here suggesting that artists consider viewing themselves as engaged in a sacred profession.

Let’s talk shop? Tell us more about your career, what can you share with our community?

Too many questions to answer at once! But I suppose they all weave together into a tapestry. I can’t say what part of my work I’m most proud of, because it all reflects my story, just different ways of saying it. From the perspective now of being in my 70’s, I see that it is the same essential vision, story. I am rather proud of that – to discover that there was always something there that I kept trying to speak of.

Art is a conversation, after all – collectively, and personally. I seem to have jumped around a lot, from sculpture to masks and ritual theatre to painting to…………….whatever seems to be the best medium of expression at the time. Different “languages”. I guess I could say that my art-making is my spiritual practice, whether it is done with others (as in theatre and ritual) or alone in my studio.

Certainly one of my most rewarding projects was the 20 year “Masks of the Goddess Project” which I concluded in 2019 with a show and performances at Arise Gallery in San Francisco. It began in 1998 when I went to Bali to study temple mask traditions. I was fortunate to produce collaborative masks with Balinese mask makers while there. Inspired by their sacred mask traditions I created a Collection of 35 masks based upon female deities and mythologies from around the world, which I dedicated as “Temple Masks” devoted to the multi-cultural Goddess. As the masks were used by dancers, storytellers, ritualists, communities and individuals, I found myself in a grand conversation, and the masks themselves gained energy, story, and creativity from those who used them. They travelled around the U.S. and even to the U.K. for 20 years, including the Parliament of World Religions, and include an archive and book about the many performances and reflections of participants in the Project. 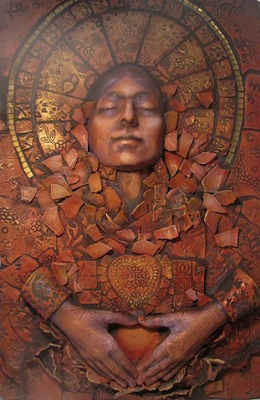 Currently I’m working on a series of mosaic/sculptures I call “Our Lady of the Shards”, which are loosely inspired by Catholic Icons. They celebrate and remember those that have been forgotten, buried, and broken, now surfacing again to a world that needs them. Titles include “The Memory Keeper”, “The Weaver”, and “Shrine for the Forgotten Midwives”.

If you had a friend visiting you, what are some of the local spots you’d want to take them around to?

Well, I would suggest Crave Coffee Shop, and Fronimo’s Greek Restaurant! My favorite places to hang out. And of course, the Botanical Garden, and a hike through Sabino Canyon.

Who else deserves some credit and recognition?Having worked collectively with others in community art projects, too many to name! Ok, just a few: the writer Ursula Leguin, the Association for the Study of Women and Mythology, and the The Henry Luce Center for the Arts and Religion