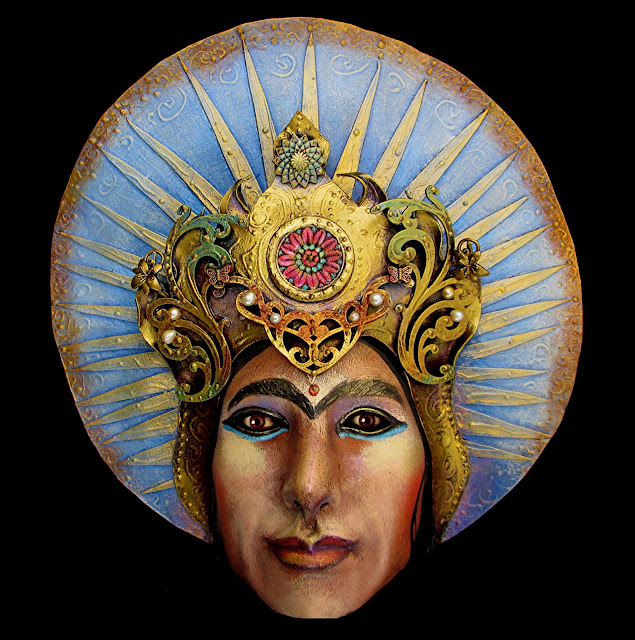 Love is Saraswati's river
flowing through our lands.
She will feed the rice fields,
She will accept our woven offerings.
She will bear our ashes
and the fires of Kintamani
to the sea.

Formless, she neither takes nor gives;
we impose these significances
upon the flowers we cast in her.

From birth to death,
Saraswati's river sustains us to the sea.


When I was in Ubud quite a few years ago to study Balinese mask traditions, , every morning and at twilight I beheld the stately procession of 5 white geese making their way up the busy street I lived on, and then in the evening, heading back to whatever rice paddy they called home. Although people on motor scooters often went around them if they could, I was amazed at the utterly un-Western patience with which Balinese motorists followed behind the geese; they did not honk at them (although the geese certainly honked their own mysterious way up the street), nor did the Balinese try to shoo them out of the way.

Saraswati is the Hindu Goddess of the arts, of beauty, of beautiful language, and of  truth, all of which are related. From Her transcendant river flows  inspiration, nourishment for body and soul. She is often shown accompanied by a white swan.  As the embodiment of speech, Saraswati is present wherever speech exists.   And so it is that She is pre-eminently associated with the best in human culture: poetry, literature, sacred rituals, and rational communication between individuals. Even today, when a new baby arrives, grandmothers make a five pointed star - called "Saraswati-sign" - on the newborn's tongue with honey. The tongue, the organ of speech, is thus "hitched to Saraswati's star" early.

"Saraswati is the Goddess of learning, art, knowledge, and wisdom. The Sanskrit word sara means "essence" and swa means "self." Thus Saraswati means "the essence of the self." Saraswati is represented in Hindu mythology as the divine consort of Lord Brahma, the Creator of the universe. Since knowledge is necessary for creation, Saraswati symbolizes the creative power of Brahma. Goddess Saraswati is worshipped by all persons interested in knowledge, especially students, teachers, scholars, and scientists.

In Her popular images and pictures, Saraswati is depicted with four arms (some pictures may show only two arms), wearing a white sari and seated on a white lotus. She holds a book and a rosary in Her rear two hands, while the front two hands are engaged in the playing of a lute (veena). Her right leg is shown slightly pushing against Her left leg. She uses a swan as Her vehicle. There is a peacock by Her side gazing at Her. This symbolism illustrates the following spiritual ideas:

The white sari that the Goddess is wearing denotes that She is the embodiment of pure knowledge. The four amms denote Her omnipresence and omnipotence. The two front amms indicate Her activity in the physical world and the two back arms signify Her presence in the spiritual world. The four hands represent the four elements of the inner personality. The mind (manas) is represented by the front right hand, the intellect (buddhi) by the front left hand, the conditioned consciousness (chitta) by the rear left hand, and the ego (ahankara) by the rear right hand. A book in the rear left hand signifies that knowledge acquired must be used with love and kindness to promote prosperity of mankind.

Two swans are depicted on the left side of the Goddess. A swan is said to have a sensitive beak that enables it to distinguish pure milk from a mixture of milk and water. A swan symbolizes the power of discrimination. Saraswati uses the swan as Her carrier. This indicates that one must acquire and apply knowledge with discrimination for the good of mankind. Knowledge that is dominated by ego can destroy the world."

- Bansi Pandit,  The Goddess Saraswati
Posted by Lauren Raine at 10:09 AM