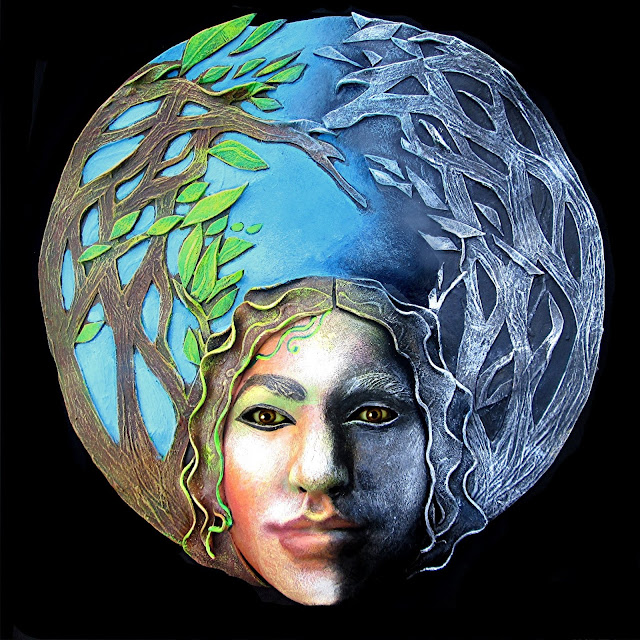 Persephone  is truly the Goddess of the Equinoxes, because She is both symbol  of spring and life's renewal when she returns to her mother Demeter at the turning of the seasonal Wheel, and she is also Goddess of death, wife of Hades, and Queen of the Underworld in the ending and dormant times as the Wheel turns.

Having said this,  I allow myself here to move out of the great universal language of archetype, and will get a bit personal.  The truth of life in nature is that everything is changing, everything dies to become something else, or at least, make way for something else.  As beings embedded in nature, this is true of us as well, whether we like it or not.  The summer ends, and as we feast on the delightful fruits and breads of the harvest, we barely notice, indeed, we find ingenious ways to deny, the slow creep of winter.  And yet that beautiful, or horrific, or both, Leveler is already advancing over the horizon, implacable and indifferent.   Both Demeter and Hades have jobs to do.

This is true of nature, this is true of biological life, and  it's true of our psyches as well.  When Persephone calls, I listen to what She has to say, whether it occurs in the flowering fields, or is a painful cry echoing from caverns deep in the Underworld.  And that is the point at which Hecate may appear with her torch (but that is another story).

We all love the Song of Persephone in the spring, the song that tells us "this is the time to BE", to feel the honey sun on your shoulders, to love, to move away from the lonely tunnels of the mind and into the great Conversation of the fields, of the planet.

When Persephone calls from the caverns, not so easy.  Recently I had a meltdown from out of seemingly "know where".  All of a sudden, I couldn't sleep, found my face full of tears that would not emerge from my eyes, was angry, very angry, and having just completed a massive project  wanted nothing more than to jump into my car and just keep going, free.  I didn't, but I really, really wanted to.    You try to discover the language and content of that dark song too, what you need to know to become more fully human, what the soul is trying to tell you.  You don't "transcend" the nighttime  voice of Persephone, you listen and change,  you ultimately mature, you keep on moving.

We are approaching (again) the Vernal Equinox.  This is the liminal Goddess  Persephone's  time, the poised moment of Balance.  Which moving away from psychological jargon simply means realizing that we must, somehow, say "yes" to all of it, and keep moving, keep dancing the light and shadow dance.  Persephone will dance with us, will educate, if one can  accept this Moving Point of Balance.

We are all, in the final analysis, Wanderers.

Persephone the Wandererby Louise Glück,In the first version, Persephoneis taken from her motherand the goddess of the earthpunishes the earth—this isconsistent with what we know of human behavior,that human beings take profound satisfactionin doing harm, particularlyunconscious harm:we may call thisnegative creation.I am not certain I willkeep this word: is earth“home” to Persephone? Is she at home, conceivably,in the bed of the god? Is sheat home nowhere? Is shea born wanderer, in other wordsan existentialreplica of her own mother, lesshamstrung by ideas of causality?You are allowed to likeno one, you know. The charactersare not people.They are aspects of a dilemma or conflict.Three parts: just as the soul is divided,ego, superego, id. Likewisethe three levels of the known world,a kind of diagram that separatesheaven from earth from hell.You must ask yourself:where is it snowing?White of forgetfulness,of desecration—It is snowing on earth; the cold wind saysPersephone is having sex in hell.Unlike the rest of us, she doesn’t knowwhat winter is, only thatshe is what causes it.She is lying in the bed of Hades.What is in her mind?Is she afraid? Has somethingblotted out the ideaof mind?She does know the earthis run by mothers, this muchis certain. She also knowsshe is not what is calleda girl any longer. Regardingincarceration, she believesshe has been a prisoner since she has been a daughter.The terrible reunions in store for herwill take up the rest of her life.When the passion for expiationis chronic, fierce, you do not choosethe way you live. You do not live;you are not allowed to die.You drift between earth and deathwhich seem, finally,strangely alike. Scholars tell usthat there is no point in knowing what you wantwhen the forces contending over youcould kill you.White of forgetfulness,white of safety—They saythere is a rift in the human soulwhich was not constructed to belongentirely to life. Earthasks us to deny this rift, a threatdisguised as suggestion—as we have seenin the tale of Persephonewhich should be readas an argument between the mother and the lover—the daughter is just meat.When death confronts her, she has never seenthe meadow without the daisies.Suddenly she is no longersinging her maidenly songsabout her mother’sbeauty and fecundity. Wherethe rift is, the break is.Song of the earth,song of the mythic vision of eternal life—My soulshattered with the strainof trying to belong to earth—What will you do,when it is your turn in the field with the god?
“Persephone the Wanderer” from Averno by Louise Glück.Copyright © 2006 by Louise Glück.
Posted by Lauren Raine at 3:52 PM

You are on a wave of inspiration��
I love the way this mask invites me to move.
It really calls out to change , to move, to ebb and to flow.