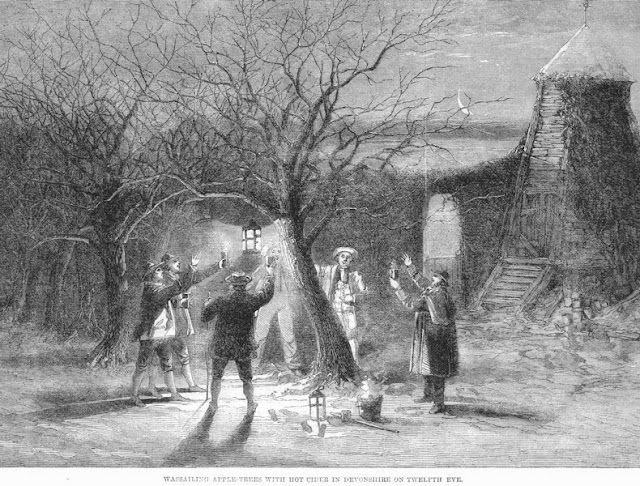 Winter Solstice Blessings to All!

I felt like sharing again this post from 2016.....partly, I suppose, because I am about to make Wassail!

I like this post because it brought back that notion of living in a  “conversant” world as well,  something I've so often thought about as I read about folk traditions, mythologies, and old customs.   Instead of seeing "nature" as "other", or a "resource",  earlier times often had a mythic, even friendly and reciprocal, relationship with the extended community of life. When we talk to the trees, the  animals, even stones………..we might just might begin to notice that we get a response sometimes!  For example, there is the old English custom  of “telling the bees” when someone has died in a farm family, and there are actually documented cases of a swarm of bees turning up at the funeral.

“Wassailing” has included a tradition of  singing to trees in celebration of Christmas.  Who is  to say that the apple trees don’t enjoy being part of the festivities? How would our world be a different place if we saw apple trees as being our generous friends, or inviting bees to the funeral of those they have lived among for so long?

Although Wassail is popularly a spiced cider drink, often with brandy added and served hot, originally it included the  Yuletide custom of  singing to the trees, in particular, the orchards  of apple trees from which the celebratory drink came.  The spiced cider was offered in honor to the trees,  and around the time of the Solstice,   traditional wassail would be prepared – soaking pieces of bread, cake or toast in it – and Wassailers would travel from apple orchard to apple orchard singing carols   to the trees, in order to demonstrate appreciation for the harvest being enjoyed.  Wassail-soaked pieces of bread or toast were then left at the trees’ roots or hung in the trees’ branches to appease the tree spirits and feed them well until the next harvest.

Like the Romans'  offerings on small farm shrines dedicated  to the "Numina", the spirits of place that assisted them with their crops and orchards (the indigenous Roman Goddess Pomona, whose name meant "apple",  originated as a Numen of the orchards), this custom, which is still practiced with a lot of good cheer  in some rural areas of  England, reflects that ancient pagan sense of "reciprocity" with an intelligent, spiritually  inhabited natural world.

Here's what goes on in Whimple, England to this very day:  (http://www.whimple.org/wassail.htm)


Our ritual follows the traditional well-tried and tested ceremony of our predecessors with the Mayor in his robes of office and the Princess carrying lightly toasted bread in her delicately trimmed flasket, whilst the Queen, wearing her crown of Ivy, Lichen and Mistletoe, recites the traditional verse. The original Whimple Incantation has been retained:

Her Majesty is then gently but manfully assisted up the treein order to place the cyder-soaked toast in the branches whilst the assembled throng, accompanied by a group of talented musicians, sing the Wassail Song and dance around the tree. The Mulled Cider or 'Wassail Cup' is produced and everyone takes a sample with their 'Clayen Cup'. 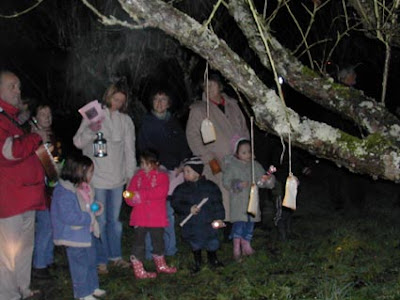 I read recently  that our habit of "toasting" may go back to Wassail revelries.  "Waes hael"  revelers would say,  from the Old English term  meaning "be well".  Eventually  "wassail" referred less to the greeting and more to the drink.  The contents of the Wassail bowl varied, but a popular one was known as 'lambs wool'. It consisted of hot ale, roasted crab apples, sugar, spices, eggs, and cream served with little pieces of toast. It was the toast floating on the top that made it look like lamb's wool.  The toast that was traditionally floated atop the wassail eventually became our "toast" -  when you hold up your glass and announce, “Let’s have a toast,”  or  ”I’ll toast to that,” you’re remembering this very old ritual of floating a bit of toast in spiced ale or mulled wine or wassail in celebration.

Wassailing – visiting neighbors (and much appreciated, friendly trees), singing carols  and sharing warmed drink – is a tradition related to the Winter Solstice with ancient roots indeed. 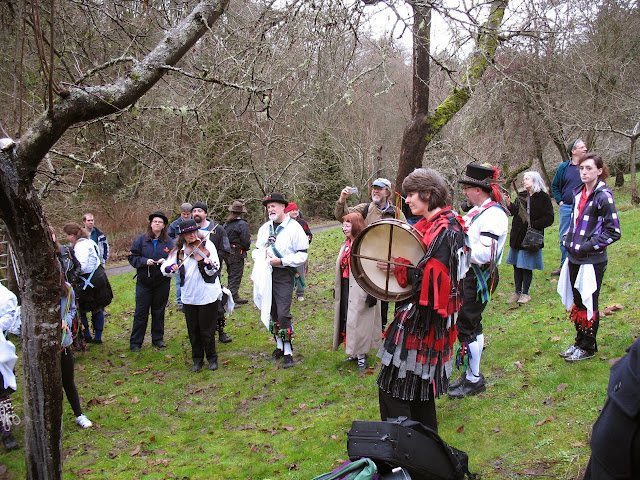 I found a good Wassail recipe, which I've taken the liberty of sharing at the end of this post.  I don't know if I'll be going out to sing to the Saguaros  this Solstice, being no longer in rural England,  but who knows what I might end up doing if I drink enough Wassail with brandy.

I'm sure the Saguaros wouldn't mind the attention.  Happy Wassailing!


Compiled in The Stations of the Sun by Ronald Hutton

From the South Hams of Devon, recorded 1871:

Huzza, Huzza, in our good town
The bread shall be white, and the liquor be brown
So here my old fellow I drink to thee
And the very health of each other tree.
Well may ye blow, well may ye bear
Blossom and fruit both apple and pear.
So that every bough and every twig
May bend with a burden both fair and big
May ye bear us and yield us fruit such a stores
That the bags and chambers and house run o'er.

This is so uplifting, on every level!