The Sacred Springs of Glastonbury: The Chalice Well 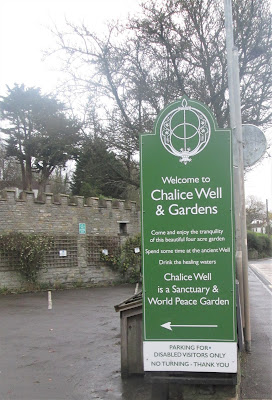 Glastonbury is a place of very ancient pilgrimage indeed, long before the coming of Christianity and the great (now ruined thanks to Henry the 8th)  Cathedral of Glastonbury.  There is evidence it was a place of pilgrimage into prehistoric times, perhaps before the coming of the Romand to Great Britain.  It is Avalon,  the source of the Arthurian legends,  the tales of Merlin and the Lady of the Lake.

Once the Tor was actually surrounded by a lake, and pilgrims visited the sacred springs associated with this highly empowered land, now called the "Red Spring" and the "White Spring" for healing.  The Chalice Well is still greatly revered by pilgrims (like myself) who come here from all over the world to visit the Wells and the Chalice Garden, to drink the water and take some home as a blessing.  The red color is iron oxide being deposited by the springs - the white spring deposits calcium, leaving a white tinge as it passes over. 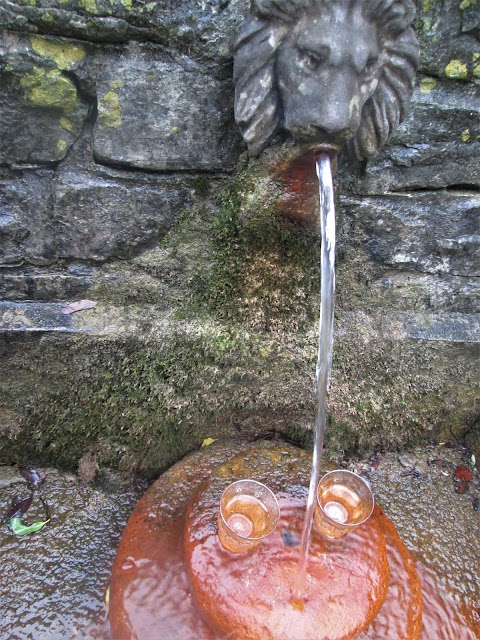 "There is an especially strong tradition of sacred wells in the Celtic nations; in Ireland alone, a survey carried out in the 1940's recorded as many as 3,000 of them.  These wells once were thought of as gateways to the Celtic Otherworld......................These springs and wells,  which originated in the Otherworld,  would once have been dedicated to the goddesses  of the land:  in Ireland, to the goddess Brigid, in the north of England, to Coventina." 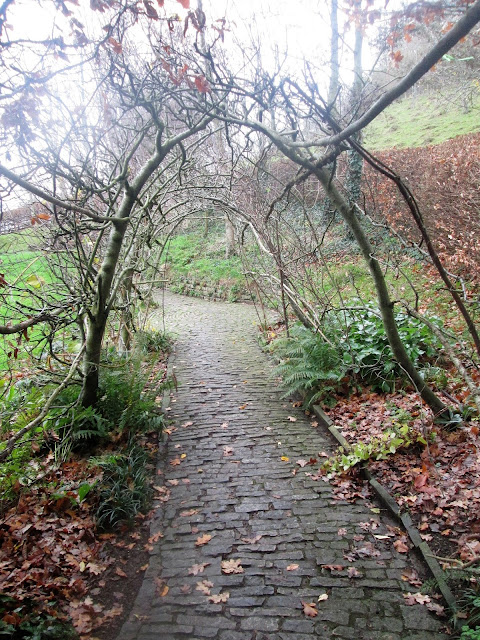 As when I visited 7 years ago, I made my prayers, and gave my gratitude, to the Lady of Avalon, to the Ancestors, and to the great Numina of this place.  The Garden is lovely, as poignant for me in the winter of 2018  as it was in the summer of 2011.  Here one is infused with the deep life-giving vitality of the land, the plants, and the Waters there, the life running beneath the stones, deeply rooted, the buds on the leafless trees full of dreaming vitality. 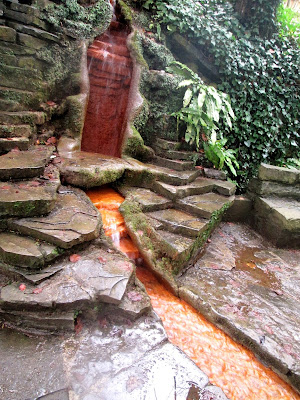 I meditated for a while, then walked around a bit.  What popped into my mind was odd - the words "Covenant Garden".  What could "covenant garden" mean, and why had I thought of it?  Thought of the ancient name of the Goddess of the land, Coventina, from which the word itself may be derived (I should look that up).  I couldn't think of any other reference until much later, until I considered that the word Covenant, like "coven", "convening" etc.  refers to a gathering of people to reach an harmonious agreement, which can include an agreement that is holy or religious in some way.    Such as the famous "Ark of the Covenant", which was supposed to hold sacred writings and objects of veneration, as well as "God's sustanance for man" which was called Manna.   Manna was the food, variously described as different substances, that was provided to feed the people; it has also come to be used to mean a kind of numinous power.   According to Wikipedia:

The Ark of the Covenant (Hebrew: אָרוֹן הַבְּרִית, Modern: Arōn Ha'brēt, Tiberian: ʾĀrôn Habbərîṯ), also known as the Ark of the Testimony, is a gold-covered wooden chest with lid cover described in the Book of Exodus as containing the two stone tablets of the Ten Commandments. According to various texts within the Hebrew Bible, it also contained Aaron's rod and a pot of manna.[1] Hebrews 9:4 describes: "The ark of the covenant [was] covered on all sides with gold, in which was a golden jar holding the manna, and Aaron's rod which budded, and the tables of the covenant."[2]

Interesting.  The Garden of the sacred wells is indeed full of holy things that represent "harmonious agreement" between all aspects of the Earth, including the two-legged beings that come there.  And "Manna" is the food provided by the Garden, by nature, and by Gaia.  A "rod that blooms".............could also be seen as the ancient Hebrew and Middle Eastern  Goddess Asherah, who was represented as a tree, and  often represented in the days of the old testament as a rod,  or "Asherah pole".  The practice of carrying "Asherah poles" was apparently fairly common in the early days of the Semite tribes, although the Patriarchs later eliminated this custom, and the Goddess, from the religion as the Semite deity became exclusively male.

A Garden represents, truly, a "Covenant", a holy agreement, between all beings of the present, human, animal, plant, soil, air, rain, water.......

A happy and successful garden is a harmonious Ecosystem.  A garden survives and thrives through a network of interdependant and interconnected relationships.  In a healthy garden plants and trees interact with each other and communicate with each other through a vast underground weaving of roots and fungi which connect the members of the garden flora community, and contribute to the lives of the many fauna that participate in the community:  the bees and other pollinators, the worms and other insects that assist in the decay process.  And the birds that assist in distributing seed as well.  Not to mention the humans that may plant, sow, admire, and occasionally eat the stray apple or strawberry as well.

It could be said that a Garden is a "Covenant" achieved by many beings, a divine agreement.

THE GARDEN OF THE COVENANT. 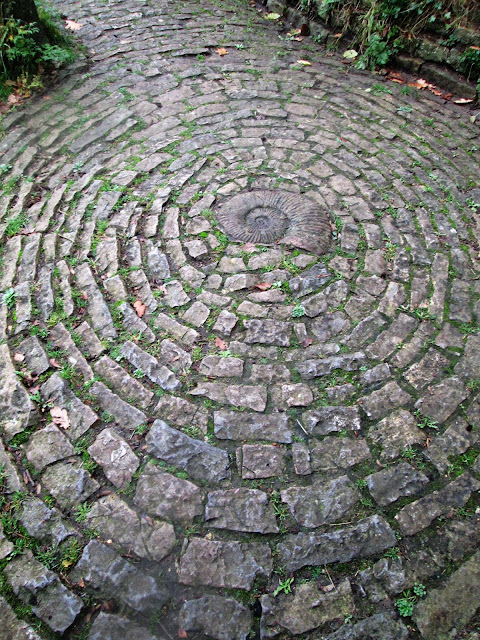 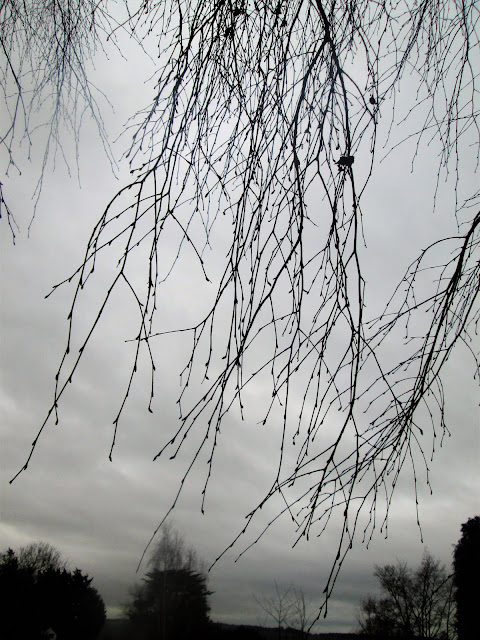 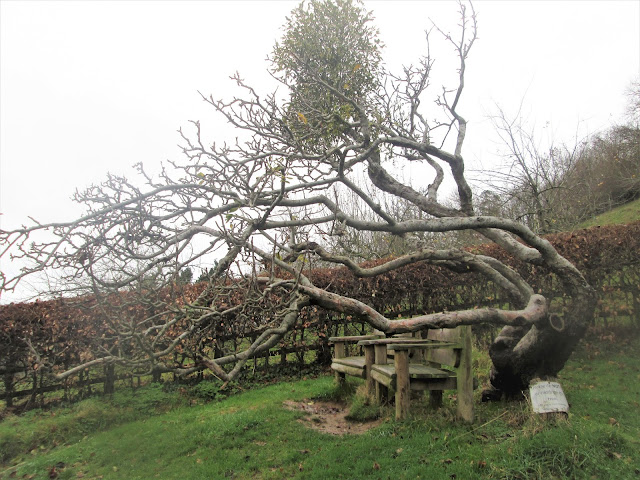 Below is the Chalice, and the Heart, and what appears to be a Dragon flying as well, carved on a chair there. 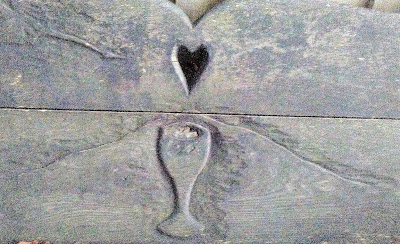 And here is my bit of Magic........... as I was getting ready to leave, I saw this tiny metallic green heart on the ground.  I was going to take it as a "Green Heart" Talisman, to remind me of my moment there in the "Covenant Garden" of the Chalice.  But then I thought, perhaps someone left it as a kind of offering, and it wasn't right for me to take it.  I put it back on the ground and took a picture.  I was amazed to see this light surrounding it in the photo!  So I took two more - they came out the same!

I left feeling truly moved.  The Earth is Speaking to us, all the time.

Wow! This post is wonderful! And I love the photos!

Amazing.. it's not green but pure white!