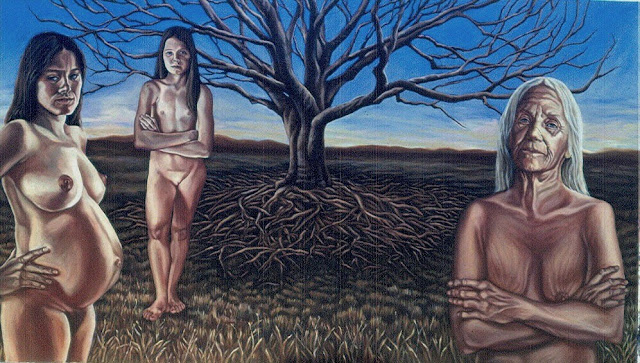 "Once upon a time the Word for World was Mother"

In 1986 I labored on a series of paintings, and an accompanying  electronic audio piece based upon re-mything the Biblical "Adam and Eve" story.  The performance was in collaboration with the wonderful Tucson artist Catherine Nash MFA.

The painting, which was shown only once for that show, was big - 9 feet by 5 feet, and did not long survive being dragged around the country.  I still love it, and since I've been trying to archive my work these days, I confess that I still am sad that my "Gaia" painting had such a short existence.  I wanted to speak about the Tree of Life and our Mother Earth as being untended, degraded, forgotten.  The three figures represented the three aspects of the Goddess, and I wanted also to talk about how they were rising again in the world, confronting us all with the damage to our planet, our Mother Earth, and to the human spirit.

Only recently have I fully realized that these themes have never left me, occur over and over in, well, just about everything I do, one way or another.  I also recently realized that in pre-Biblical times, and also in early Judaism, the great Mother Goddess Asherah 2 was symbolized by a tree, and her devotees carried what was called an "Asherah pole", a piece of wood, to symbolize Her.  I think I have been a devotee of Asherah for a very long time, and perhaps this painting was my own attempt to speak for Her.


The Politics of Women's Spirituality: Essays on the Rise of Spiritual Power Within the Feminist Movement.  1  Years later it was my privilege to work with Starhawk and the Reclaiming Collective, and I made the "Masks of the Goddess" Collection for the 20th Annual Spiral Dance in 1999.  And I was also privileged to meet Charlene Spretnak in the 90's.


The Performance piece that accompanied this show, and others,   I also lost in the course of the years,  until just recently I found some old cassette tapes.  I had them turned into CD's, and then my friend Kathy Keller re-mastered them a bit for me.  And now I have them back!  So I'm delighted to share and archive "When the Word for World was Mother" on my Blog!

It is typical of establishment thinking to call, as Wikipedia does, an Asherah pole a "cult object" and Asherah a "fertility Goddess", even though this deity was regarded as a great deal more.   With an established patriarchal biblical backdrop,  it would not occur to the powers that be to call the biblical God "a tribal war god", or  the "Fall from the Garden of Eden" cult myth.  Paradigms are viewed through the language.   The  Wikipedia authors discussing Asherah  also mention (right away I might add)  that she is the "consort" of  a male god, establishing, mythologically speaking, her subordination.  When one considers that western religion has evolved to include a monotheistic male god who creates completely alone with no wife, has no mother, nor a daughter.........well, no surprise there.  The Mother archetype  is long gone in western theology.   What artists, scholars, spiritual leaders, archaeologists and mythologists were doing in 1982 to return the Divine Mother to the world............is more important than ever.

The painting is amazing!