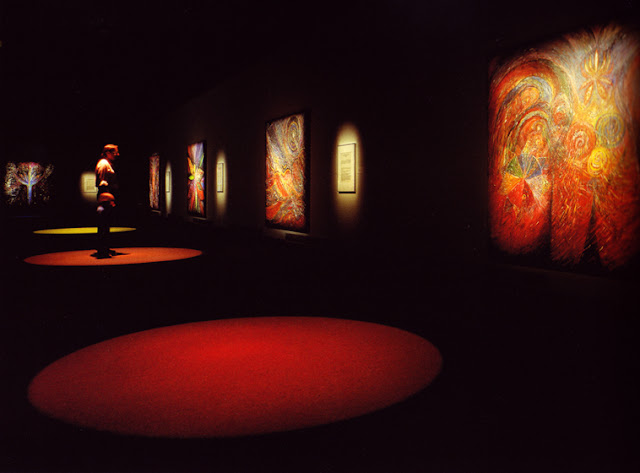 The divine manifestation is ubiquitous,
Only our eyes are not open to it.
Awe is what moves us forward.

Live from your own center.
The divine lives within you.
The separateness apparent in the world is secondary.
Beyond the world of opposites is an unseen,
but experienced, unity and identity in us all.
Today the planet is the only proper “in group.”
Participate joyfully in the sorrows of the world.
We cannot cure the world of sorrows,
but we can choose to live in joy.

You must return with the bliss and integrate it.
The return is seeing the radiance is everywhere.
The world is a match for us.
We are a match for the world.
The spirit is the bouquet of nature. . . .
Sanctify the place you are in.
Follow your bliss. . . .

Joseph Campbell in his "The Power of Myth" interviews with Bill Moyers famously said "Follow your Bliss.......and doors will open where you don't expect them to."  Bill Moyers agreed in his own way, commenting that he felt sorry for people who seemingly  "had no invisible means of support".

I have not been able to write, or even make art lately, a block I hope will pass.  So I look back, look back, look back, and that is appropriate for this time of year, the time of Samhain.  This post is from exactly 6 years ago, what I was thinking about then.

I lost my two oldest friends in the past 5 years,the poet Felicia Miller and the composer and writer Joanna Brouk.   I know that I am not immortal as well, and think often, "what can I leave behind?"  Well, there is a body of work, lots and lots of art and writing!  Who knows what will happen to all that, since I have neither descendants to preserve it, nor patrons to eagerly collect the "works of Lauren Raine"!  Still, I love my work and am glad of the creative life I've been privileged to live.  And if there is a "message" I could convey, it is that of the Goddess and viewing the world through a different paradigm, and also, the grace and help and magic that continually surrounds us, the "web of being".  I so often find I write about that, wanting to re-affirm for myself and for others "what I saw" at the margins.


I am remembering  today my  rather miraculous  journey that began with a book I wanted to write just after I finished my MFA, a project that took me across the country and introduced me to a nomadic life.  Perhaps the reason I feel like telling this winding story  is two-fold:  It seems important to pass on the good news that we so very often, if we undertake that which we feel passionate about, find that "doors open where you least expect them to", as Joseph Campbell said. When I look back at many of the creative undertakings in my life, I have to admit the presence of the miraculous was there, collaborating with me.

If there is any point to sharing this journal, it may well be my effort to affirm this perception, express my clumsy gratitude.  Life really is far more magical than we can imagine, and we're usually too busy to notice.

In 1987, I graduated from the University of Arizona, feeling very unsure of what it might mean to be an artist.  I found many aspects of the art world cynical and devoid of depth or relevance.   I remember  conversations Catherine Nash  and other fellow students had about  New Age spirituality, my fascination with tribal arts, pouring over Kandinsky's "Concerning the Spiritual in Art", or Jose Arguelles "The Transformative Vision", my utter delight at seeing Alex Grey's "The Sacred Mirrors" in Art Week for the first time.  These were sources that truly moved me.


"You develop your skills and technical expertise, and then trust the process. You learn all you can learn, and then go into the studio and forget everything. There is an emptying out, being willing to confront not knowing. We really do not have a language in this culture for these kinds of experiences."

So I boldly, if naively,   announced that I would go on a Vision Quest to write a book based on interviews with transformative, spiritual artists, since such people were generally ignored or pooh-poohed by the contemporary art world.  I made a book outline and proposal, interviewed my friends, and then made a list of some of the artists I wished I could interview, among them Alex Grey, Ingo Swann, and others.  I had one small problem:  I was a virtual unknown in the arts world.  How could I get anyone to take me seriously enough to let me interview them?

Synchronicities are like touchstones, you follow one and it leads to another.  Around this time I had a memorable dream - I was in construction gear with a hard hat on, and I was working on a big steel bridge.  Next to me was a black man in similar gear, and after a while he put down his tools, and said to me "we're just going to have to go to the authorities for help."  The "authorities"?  But amazingly, a few days later  I received a little booklet in the mail, which I have no memory of ordering,  from, I believe, Lucis Publishing.  It was an Alice Bailey pamphlet titled "Building and Bridging:  The New Group of World Servers".  Bridges, I thought, there it is again.

The following week, I was invited to a party, where I met an artist named Beth Ames Swartz, whose installation "A Moving Point of Balance" was soon to be on view at the University Art Museum.  I didn't really know anything about her, but at the party I shyly introduced myself, and rather audaciously told her I was writing a book about spiritual artists, and could I interview her.

Beth not only agreed, but told me she was one of the founders of the Transformative Art Movement, was organizing a conference, and would I like to have her list of contacts!  "I'm into bridge art" she told me.  That evening, when I looked through the papers she had given me, I found myself with a  list that included a number of the artists I had been thinking of, including Alex Grey and the great performance artist Rachel Rosenthal.  Now I had a personal introduction from Beth!

So I booked a crafts booth at a Renaissance Faire near New York City to pay my way, and off I went, on a journey that took me to NYC, and later Los Angeles, San Francisco, and points in between. So many surprising things happened!  I got my interview with  artist Rafael Ortiz about his Physio-Psycho-Alchemy, for example,   not because I sought him out, but because a co-worker at the Renaissance Faire mentioned that she knew him, and he was organizing some kind of conference about spiritual art at Rutgers.  Which is also how I became involved in Rafael's Art and the Invisible Reality Symposium, where I met many other artists pursuing spiritual expression.  And the Quest continued.

Just recently it was my pleasure to see that interview with Rafael published, at last, in the Coreopsis Journal of Ritual Theatre.  Circles and spirals..............

"The problem is we’re so skimpy and stingy, so timid about asking. The Universe is willing to give; its there for the asking.  When I work, I feel that ‘seamlessness” every much, because half of the time I don’t know where the ideas actually come from. They come in all kinds of forms. An idea can be formed in a sound, or in a very articulate kind of language….but it’s all part of the same thing. This comprehension of holism is very important at this point in time. I think it is also very important to the planet for us to be able to think in those terms"

I tried for a quite a while to get my book published, but was never successful.  To be honest, I think it was my own fault this was so - I had an underlying lack of confidence in myself that, in retrospect, undermined me every time.  I have seen this as a problem throughout my career, and it is a pleasure to be of an age and time of life now where, well, it's not relevant any more.  I don't care anymore about competition or ambition, I care only about the unfolding that m art offers me as I live this life.

Perhaps someday I'll go back to the Art and Spirituality project, with new perspective and much greater confidence.  I think such voices as Beth Ames Swartz, Rafael Ortiz, and many others (and me too!) are needed now. 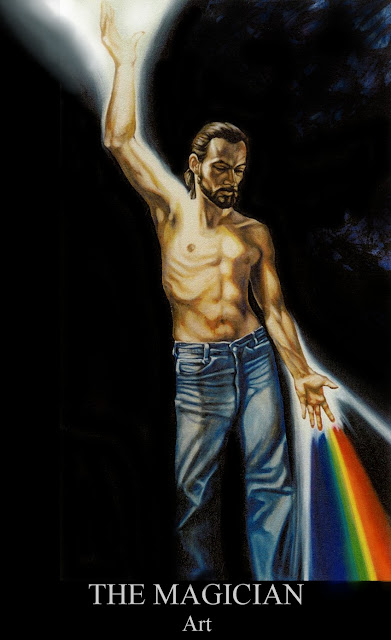 Beth's work looks amazing and I like Joseph Campbell's words - good advice. Thank you for sharing this and reminding me to recognise all the amazing things that happen that often go unnoticed. I hope you pick up that project again or discover a new version of it to be explored.

Wonderful post! I would love to read this book, Lauren. Why not self-publish as an ebook?
- Trish

Thanks to you both! Good suggestion, Trish............it's just that the material is over 20 years old. Still, it could be re-integrated into new material.

Wow, beautiful post! Your writing and your art are your legacy, Lauren. Never doubt that!