Conrad Bishop on "Why Make Art" 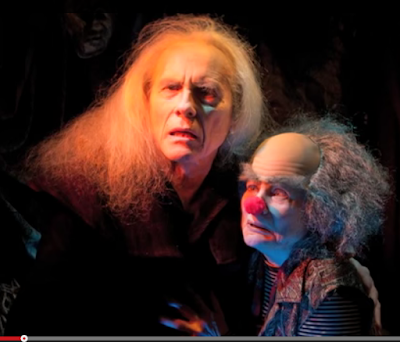 I love the response  my friend Conrad Bishop, who along with his wife and collaborator Elizabeth Fuller is one half of the Independent Eye Theatre  gave when he was asked about making art in a time of turmoil:

"On Facebook, a friend from way back asked, “How does art help you deal with the current state of the world?” There were a number of truly inspirational replies.

My own art serves me the way eating or lovemaking serve me: a good thing to do while passing the time between Now and Death. The main point of living is to live.

If you can give good things to other people, that’s good; and if you can have pleasure while doing it, that’s good. I suppose one might make a case that much art is financed by exploitation, as with the plutocrats who sit on the board of the Met, but that’s true of virtually every human endeavor. Our own work costs only what it takes to feed and house us, and I think we give back a lot—though not likely to those who are actually creating the wealth, working in the fields or on the assembly line. You can’t entirely escape the moral dilemma of living until you serve a free lunch to the worms.

With other art: When I experience Shakespeare or Bach or Rembrandt or Dickens, part of my feeling, intrinsic to its impact, is admiration for their making these extraordinary creations within a world that was just as distraught and demented as ours, if not more so: war, disease, slavery, torture, beggary, bigotry, the lower classes born into life sentences, sunrise followed by shitstorm—name your horror, it was there in spades.

Our own dystopian achievement is in attaining greater megatonnage, raising the stakes on Gaia’s table and our capacity for self-destruction.  But unlike the troupe at the Elizabethan Globe Theatre, we don’t have to close our doors every time the Plague breaks out, and we don’t get our teeth pulled by the local barber, something I'm particularly grateful for. I’m all for being aware of—and working to change—the vileness of human destruction on the planet, but I don’t think we have a valid claim to being uniquely vile on the historic timeline.  History seems to be an equal opportunity employer.

In an NPR interview, a resident of Austin compared her city with the rest of Texas: “a diamond in a goat’s butt.”  That’s my sense of the place of art in the world.

Some would hope that the diamond might improve the goat’s digestive tract. I’d like to believe our new novel will have a butterfly effect, bringing peace, empathy, and better puppet shows to the 23rd Century, but I wouldn’t bet on it. “Confirmation bias” makes us love the stories that confirm our values, while making other people think. Euripides gave us portraits of immense passion and empathy, even as Athenian oligarchic democracy went to hell with imperialist ambition and atrocity.

At best, our art can do nothing more than preach to the choir. I tell myself, though, that the choir needs serious preaching to, lest they all stay home to gorge on Cheetos.

I guess my answer to the query is that art helps me deal with the current world by doing something that, still at the age of seventy-five, I’m struggling to learn how to do."

(from our blog DamnedFool.com)
Posted by Lauren Raine at 2:00 AM