I couldn't help but laugh when a few days ago I read  the article below in the Feminism and Religion Blog, which I subscribe to.  In the previous post I explored the idea of "marga" and synchronicity which began when I was writing a little article to submit to the very same Blog (the article, of course, was about Spider Woman, the great connector of all things)  In the course of writing my last post I included in the post something about Megara.

Following those footprints........and I take the liberty of copying here the fascinating article by Laura Shannon.  Laura Shannon has been researching and teaching traditional women’s ritual dances since 1987. She is considered one of the ‘grandmothers’ of the worldwide Sacred / Circle Dance movement and gives workshops regularly in over twenty countries worldwide. Laura holds an honours degree in Intercultural Studies (1986) and a diploma in Dance Movement Therapy (1990).  She has also dedicated much time to primary research in Balkan and Greek villages, learning songs, dances, rituals and textile patterns which have been passed down for many generations, and which embody an age-old worldview of sustainability, community, and reverence for the earth. Laura’s essay ‘Women’s Ritual Dances: An Ancient Source of Healing in Our Times’,  was published in Dancing on the Earth. Laura lives partly in Greece and partly in the Findhorn ecological community in Scotland.

Dance of Persephone: The Trata of Megara by Laura Shannon

In a previous post on FAR I explored Greek Easter customs which interweave Christian and pre-Christian beliefs.  Today I would like to take a closer look at one of these customs, the women’s ritual dance known as Tráta, ceremonially performed on ‘Bright Tuesday,’ the Tuesday after Easter. Versions of Tráta survive in the towns of Mégara and Elefsina just west of Athens, on the island of Salamína directly across from them, and in the surrounding area as far as Thebes. 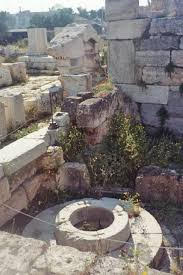 Elefsina, of course, is Eleusis, where for over 2,000 years the Eleusinian Mysteries enacted the story of Demeter and her daughter Persephone’s descent to the Underworld. Choral dance was a central part of the ceremonies at Eleusis – as at other sacred sites including Delphi, Knossos, Athens, and Vravrona – and the ‘Well of the Beautiful Dances’ can still be seen at the archaeological site. It is a a visible reminder of the circle dancing which was a part of the initiatory experience, bringing cosmic order – symbolised by the circle – into the human world. This is still one of the functions of the Tráta as performed today.
Eleusis – ‘Well of the Beautiful Dances’

Temple relief of Demeter with grain, poppies, snakes, from Eleusis.
Initiation into the Eleusinian Mysteries involved the understanding that an ear of grain first must die in order to give new life (whether planted as seed, baked into bread, or made into beer). The phenomenon of death leading to life through the medium of a sacred marriage was celebrated in other archaic springtime festivals, such as those of Aphrodite / Adonis, Cybele / Attys, and Isis / Osiris), from which the Resurrection story of Christian Easter is directly descended. I believe something of these ancient customs survive in the women’s Tráta dance, whose every detail hints at the story of Persephone’s descent and return.

Women dancing the Tráta at Vilia on Mount Kithairon, Attiki, Greece.
In Megara, the annual ritual of the Tráta is one of the most significant events in the village. Women of all ages gather at the upper square, near the tiny church of ‘Saint John the Dancer’ with its miraculous spring believed to grant fertility. The women’s costumes used to feature strong black, white and red elements, the colours of the Triple Goddess and the three central figures of the Eleusinian drama (Hecate, Demeter and Persephone).

The old style of costume from Megara with strong black, white and red colours
Now they are rich in silk, satins, and gold embroidery, with deep red aprons embroidered with flowing floral and vegetation motifs. The long, pale silk veils – symbol of initiation and the threshold between the worlds –  are embroidered with fertility symbols including wheat, sign of Demeter, and pomegranates, traditional food of the dead and symbol of prosperity and abundance chiefly associated with Persephone.

Velvet jacket (zipoúni) of Mégara with downwards-facing Goddess embroideries
The zipoúni or velvet jacket is richly embroidered in gold, and the sleeves feature the pre-Christian motif of the sun-headed Goddess; unusually, she is depicted head-down instead of right-side-up, as if indicating the direction of descent to the underworld.  The overall effect closely resembles the women on the frescoes in the 4th C. BCE Tomb of the Dancing Women in Apuglia, Italy.

Fresco from the ‘Tomb of the Dancing Women’, 4th C BCE, Apuglia, Italy
The kinetic motif of ascent and descent central to the myth of Persephone is dramatically emphasised by the pronounced zigzag of the dance pattern, visually mirrored in the basketweave handhold, and expressed again in the way the dance spirals completely in and out as you can see in the video.  The Tráta is one of the few traditional Greek dances which do this, in a labyrinthine movement of deepening and emerging which magnifies the inwards-outwards, ascending-descending theme.
In a reversal of normal procedure, young unmarried girls lead the older married women in the dance line: the daughter is the agent in this danced symbolic journey.  Among the mature women at the back of the line are the strongest singers, those able to sing loudly enough for the dancers at the front to hear, even when the circle is large and the dance line snakes and spirals around.
This spiralling movement is stunning to watch. In Mégara in the late 1940s, Kevin Andrews described it thus: ‘A long line of a hundred and fifty to two hundred women with gorgeous clothing holding hands across each other’s waist, simply moving slowly round and round the square… wearing head cloths of white silk falling in long folds over their backs and shoulders, plum-coloured velvet jackets tight and stiff with a profusion of gold embroidery, with lace at the cuffs, strings upon strings of coins hung across the breast, and silk aprons heavily embroidered over their long skirts that swirled over their gold-slippered ankles… There was no music anywhere.’
Rennell Rodd, in 1968, wrote that ‘the step appears to be extremely simple, not to say monotonous, and yet the precision with which it is accomplished, the simultaneousness of every movement, cannot be easy to acquire; while the general effect of these serpentining chains of linked figures, in their bright dresses and floating veils, advancing, retiring, and winding round, is particularly graceful and pretty.’


The women’s Tráta today still resembles the pictures painted by these witnesses of 50 and 75 years ago, but as with most Greek folk customs, major changes are underway.  John Tomkinson reports that the dancers used to ornament their songs with strange low twittering sounds like that of swallows (also a symbol of Persephone, and like her, associated with the returning spring) but the women no longer do this. By custom the Tráta was accompanied by the women’s own a cappella singing, yet now the mayor of Mégara hires an orchestra of male musicians to accompany the women. And whereas historically the women’s Tráta was the only dance permitted on this day, now boys’ dance groups come on at intervals to perform other Greek dances – Syrtos, Kalamatianos, Tsamikos – turning the ritual into a kind of performance complete with speeches by dignitaries, sellers of peanuts and balloons, and similar distractions.
However, even with all of these changes, the dance still expresses something valuable on behalf of those who watch, and for many the Tráta of Mégara remains a unique and important touchstone of the Easter festival. Each time I have gone, I have been touched by the powerful sense of rightness and peace which comes over the crowd as the women’s ritual dance unfolds before them, bringing a sense of wholeness and relief, just as in ancient times.
https://feminismandreligion.com/2016/05/07/dance-of-persephone-the-trata-of-megara-by-laura-shannon/
Recommended reading:
Shannon, Laura. “Ritual Dance in Greece, Then & Now,” 2011. http://laurashannon.net/articles/49-ritual-dance-in-greece-then-a-nowShannon, Laura. “Women’s Ritual Dances: An Ancient Source of Healing in our Time”. In Dancing On The Earth: Women’s Stories Of Healing Through Dance. J. Leseho and S. McMaster. 1st ed. Findhorn Press, 2011. 138-157.
Posted by Lauren Raine at 3:31 PM