My wonderings about the origins of   Santa Claus.  Could Odin be another possibility?
Yule
The Winter Solstice has been celebrated since time immemorial, and in the  cold Nordic countries, where the return of the Sun's life giving warmth is of particular concern, there is evidence that it's been celebrated since the time of the Megalith builders and before.  Yule/Jól was was probably connected to the full moon nearest the winter solstice.

Yule or Yuletide ("Yule time") is a religious festival observed by the historical Germanic peoples, later being absorbed into and equated with the Christian festival of Christmas. The earliest references to Yule are by way of indigenous Germanic month names (Ærra Jéola (Before Yule) or Jiuli and Æftera Jéola (After Yule). Scholars have connected the celebration to the Wild Hunt, the god Odin and the pagan Anglo-SaxonModranicht.    Yule is also used to a lesser extent in English-speaking countries to refer to Christmas. Customs such as the Yule log, Yule goat, Yule boar, Yule singing, and others stem from Yule or Yuletide("Yule time").

Yule is the modern English representative of the Old English words ġéol or ġéohol and ġéola or ġéoli, with the former indicating the 12-day festival of "Yule" (later: "Christmastime") and the latter indicating the month of "Yule", whereby ǽrra ġéola referred to the period before the Yule festival (December) and æftera ġéola referred to the period after Yule (January). Both words are thought to be derived from Common Germanic *jeχʷla-, and are cognate with Gothic (fruma) jiuleis and Old Norse.   The word is attested in an explicitly pre-Christian context primarily in Old Norse.

Among many others  the long-bearded god Odin bears the names jólfaðr (Old Norse 'Yule father') and jólnir (Old Norse 'the Yule one'). " 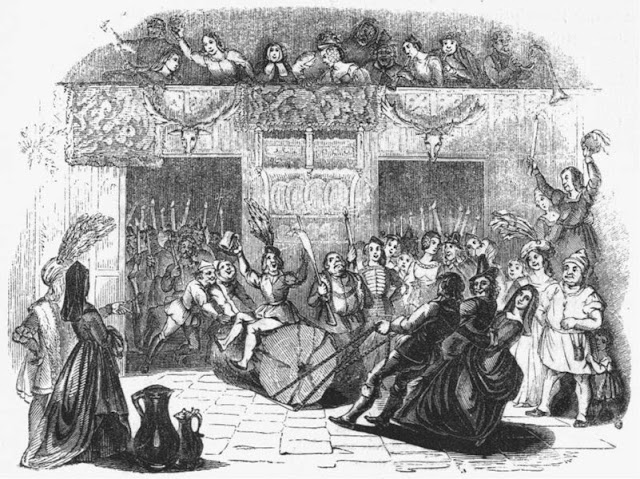 The origins of  the Nordic Yule go back to a feast to honor the Norse God Odin, who among other things was the jolly God of Intoxicating Drink. The custom of  the Yule Log or Yule Tree  emerged from this winter festival as well.

The custom of Yule log varies from region to region.  It's good to remember the primal importance of the gift of warmth and of fire to early people living in the cold North, the "flame at the Hearth" for ancient families.  The Log may have originally been a large tree (Christmas Trees)  brought to the house with great ceremony.

On Christmas, people light the Yule log placed in the hearth.   The burning of the Yule Log brings good fortune for family and friends.   After Christmas celebrations, a piece of the Yule log is retained to relight next year along with next year's log.
Santa Claus

"The appearance of Santa Claus or Father Christmas, whose day is 25th of December, owes much to Odin, the old blue-hooded, cloaked, white-bearded Gift bringer of the north, who rode the midwinter sky on his eight-footed steed Sleipnir, visiting his people with gifts. … Odin, transformed into Father Christmas, then Santa Claus, prospered with St Nicholas on the Christmas stage."  ......Margaret Baker

St.  Nicholas was a 4th-century Christian bishop from Lycia (now in Turkey), who was  known for his charity, and giving gifts to the poor. In one notable story, he met a pious but impoverished man who had three daughters. He presented them with dowries to save them from a life of prostitution. In most traditional Iconic images,  St. Nicholas is portrayed as a bearded bishop, wearing clerical robes, an important patron saint of  children, the poor, and prostitutes.

So few people know that Santa Claus is a blend of an early Christian saint living in Turkey (Saint Nickolaus)  and the Norse god Odin, with a few other influence thrown in over the ages.   Odin, the ruler of Asgard  was often depicted as leading a hunting party through the skies, during which he rode his eight-legged horse, Sleipnir. In the 13th-century Poetic Edda, Sleipnir is described as being able to leap great distances, which some scholars have compared to the legends of Santa's reindeer (and, of course, the Edda are from Finland, which once abounded with reindeer). Odin was portrayed as an old man with a long, white beard.
I read that during the winter, in some pagan folklore, children would place their  boots near the chimney (and in the cold of a Nordic winter, it's a good place to put them), filling them with carrots or straw as a gift for Sleipnir. When Odin flew by, he rewarded the little ones by leaving gifts in their boots. Like traditions of the "Green Man" in England, in rural areas of Germanic countries  this practice survived despite the adoption of Christianity. As a result,  gift-giving became associated with St. Nicholas rather than the earlier Pagan god Odin.  Only now we hang stockings by the chimney, and leave cake and brandy rather than carrots and straw. 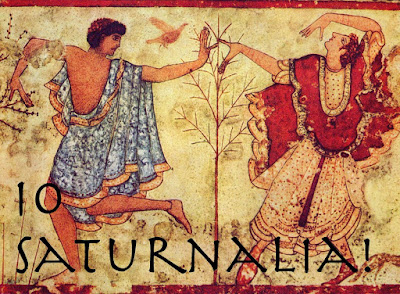 Last, as a contender for the origin of Christmas, we have the Roman Saturnalia Festival, traditionally celebrated around the winter Solstice.  As Rome became Christianized through Constantine, and eventually became the center for European Christianity (Vatican), it is highly likely that their beloved Saturnalia Festival was the forerunner of the later Christmas celebration.  According to Matt Salusbury,   (http://www.historytoday.com/matt-salusbury/did-romans-invent-christmas):

"It was a public holiday celebrated around December 25th in the family home. A time for feasting, goodwill, generosity to the poor, the exchange of gifts and the decoration of trees. But it wasn’t Christmas. This was Saturnalia, the pagan Roman winter solstice festival. But was Christmas, Western Christianity’s most popular festival, derived from the pagan Saturnalia?
The first-century AD poet Gaius Valerius Catullus described Saturnalia as ‘the best of times’: dress codes were relaxed, small gifts such as dolls, candles and caged birds were exchanged.  Saturnalia saw the inversion of social roles. The wealthy were expected to pay the month’s rent for those who couldn’t afford it, masters and slaves to swap clothes. Family households threw dice to determine who would become the temporary Saturnalian monarch.
Saturnalia originated as a farmer’s festival to mark the end of the autumn planting season in honour of Saturn (satus means sowing). Numerous archaeological sites from the Roman coastal province of Constantine, now in Algeria, demonstrate that the cult of Saturn survived there until the early third century AD.
Saturnalia grew in duration and moved to progressively later dates under the Roman period. During the reign of the Emperor Augustus (63 BC-AD 14), it was a two-day affair starting on December 17th. By the time Lucian described the festivities, it was a seven-day event. Changes to the Roman calendar moved the climax of Saturnalia to December 25th, around the time of the date of the winter solstice.
Emperor Domitian (AD 51-96) may have changed Saturnalia’s date to December 25th in an attempt to assert his authority. He curbed Saturnalia’s subversive tendencies by marking it with public events under his control. The poet Statius (AD 45- 95), in his poem Silvae, describes the lavish banquet and entertainments Domitian presided over, including games which opened with sweets, fruit and nuts showered on the crowd and featuring flights of flamingos released over Rome. Shows with fighting dwarves and female gladiators were illuminated, for the first time, into the night.
The conversion of Emperor Constantine to Christianity in AD 312 ended Roman persecution of Christians and began imperial patronage of the Christian churches. But Christianity did not become the Roman Empire’s official religion overnight. Dr David Gwynn, lecturer in ancient and late antique history at Royal Holloway, University of London, says that, alongside Christian and other pagan festivals, ‘the Saturnalia continued to be celebrated in the century afterward’.
Christmas apparently started – like Saturnalia – in Rome, and spread to the eastern Mediterranean. The earliest known reference to it commemorating the birth of Christ on December 25th is in the Roman Philocalian calendar of AD 354. Provincial schisms soon resulted in different Christian calendars. The Orthodox Church in the Eastern (Byzantine) half of the Roman Empire fixed the date of Christmas at January 6th, commemorating simultaneously Christ’s birth, baptism and first miracle.
Saturnalia has a rival contender as the forerunner of Christmas: the festival of dies natalis solis invicti, ‘birthday of the unconquered sun’. The Philocalian calendar also states that December 25th was a Roman civil holiday honouring the cult of sol invicta. With its origins in Syria and the monotheistic cult of Mithras, sol invicta certainly has similarities to the worship of Jesus. The cult was introduced into the empire in AD 274 by Emperor Aurelian (214-275), who effectively made it a state religion, putting its emblem on Roman coins.
Sol invicta succeeded because of its ability to assimilate aspects of Jupiter and other deities into its figure of the Sun King, reflecting the absolute power of ‘divine’emperors. But despite efforts by later pagan emperors to control Saturnalia and absorb the festival into the official cult, the sol invicta ended up looking very much like the old Saturnalia. Constantine, the first Christian emperor, was brought up in the sol invicta cult, in what was by then already a predominantly monotheist empire: ‘It is therefore possible,’ says Dr Gwynn, ‘that Christmas was intended to replace this festival rather than Saturna