"Today, I would describe a priestess as a woman who lives in two worlds at once, who perceives earthly life against the backdrop of a vast, timeless, reality."

"In the Western traditions, spirituality has been so drained of Eros, it has vitually been removed from what most people consider a spiritual life.  And there is a deep hunger to heal that wound." 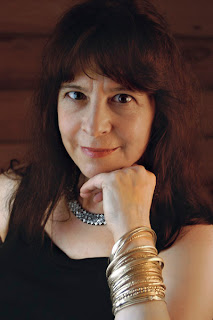 In my earlier post I shared a performance piece I wrote for Aphrodite, the Greek Goddess of Erotic love.  I also wanted to re-post also some information about  Jalaja Bonheim,  psychologist, temple dancer, and creator of the Institute for Circle Work in Ithaca, New York who has devoted much of her life to re-sacralizing and healing  the wounds of feminine Eros.   She is the author of Aphrodite's Daughters: Women's Sexual Stories and the Journey of the Soul.  After spending her childhood in Austria and Germany, Jalaja studied classical temple dance in India before coming to the United States in 1982. She is the author of three other books as well, which were inspired by her passion for integrating sexuality and spirituality in our world.

"I think that every woman should have the opportunity, at some point in her life, to set down her sexual baggage among people who respect and support her, and to unpack it with them.  Our isolation has reinforced the assumption that nobody shares our feelings, or cares about our story, or wants to know.  But our individual baggage is never just ours alone.  Rather it belongs to the collective.  Other women have their own piece to carry.  The time has come to speak of what we know.  In the Temple we now sit in silence, a circle of priestesses.  One by one, each of us has stepped forward to make her offering.  Each one has given her gift, revealing through her story a beauty that made us catch our breath, a courage that renewed our own.  Around us we sense the spirits of many others - mothers and grandmothers, lovers and husbands, teachers and guides, the spirits of the ancestors and the spirits of those who are yet to come."