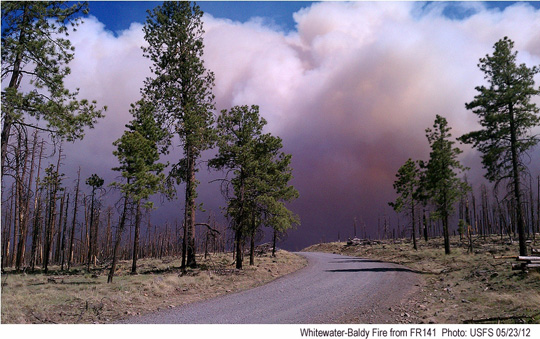 Once again, the fire season is upon the Southwest, and the past few years have seen monster fires unlike anything in previous years. I am very saddened to learn that the Gila Wilderness fire in New Mexico is close to Reserve, where the Anima Center is located. I copy below from Jesse's blog, and urge all friends of Anima and their important work to contribute to the Fire Fund, as well praying that this year, as last, the blaze will bypass their land.

“Largest Wildfire of The Year” Bearing Down On Anima

by Jesse Wolf Hardin on May 25th, 2012
Time to stay calm, do our Plant Healer and conference work, and keep noticing what is wonderful and right. This is the blog post we didn’t want write, but considering the amount of worried emails we have been getting, it is time.  As has been reported on NPR and television news, the officially proclaimed “largest fire of the year in the U.S.” is consuming the rich Ponderosa ecosystem only 20 miles to the south of us… and is fast heading our way.
…

For the second time in as many years, the Anima Sanctuary and our homes are threatened by wildfire, this time by what has been named the Whitewater/Baldy Complex Fire due to its being a merging of two separate burns into one.  As of tonight, it is over 100,000 acres in size, covering around 150 square miles.  We’d been spared breathing or even seeing the smoke until Friday the 24th, thanks to the SW winds pushing the column east as much as north, but as of Thursday night the wind direction had shifted to due north and brought the terrifying smoke column close enough to see.  The photos show Friday’s view above our cabin, facing east.
We have reopened the Anima Fire Fund to donations, to help make sure we can get all the materials and labor needed to maximize Anima’s protection.  See Fire Fund details below.
…

WhitewaterBaldy Fire Column above Anima cabin
The New Mexico Department of Health and New Mexico Environment Department today issued a smoke advisory for norther and eastern New Mexico, as a result of our Whitewater/Baldy Complex fire.  One line stood out: “Based on current extreme drought conditions, it is possible that smoke in the region could persist until the monsoon season.” When mentioning smoke, of course, they are inferring that the fire producing that smoke isn’t likely to slow any until the rainy season which could start as late as August… something that the USFS has yet to publicly admit.  The fact that the Forest Service press releases describe the 500-plus firefighters now based here as being “kept on the sidelines” due to terrain and weather conditions, is a pretty clear indication that neither the existing fire management policies nor fire fighting technology and resources are adequate to the task.  After decades of complete suppression and fuel buildup, it is impossible to simply write off a fire as a process of nature, and both when to do control burns and when and how to suppress wildfires needs to be figured out while there is anything left of the drought stricken mountain West.
…

Whitewater-Baldy Fire and Anima Sanctuary
As always, the winds will be the factor in the speed as well as direction of the fire, and hopefully the 40-plus mile per hour winds of the last few days will at least slow after the weekend.  Following a course towards the Northeast would destroy some wonderful forest but threaten the fewest human abodes.  Whenever it blows due north, the edge of the blaze is being driven straight towards us.
Truthfully, it is hard to imagine that this latest inferno will not have already reached and singed our reforested canyon in the upwards to two months that it could be before the monsoons roll in.
And no matter what the evidence, it is impossible for me not to imagine that this land that gives to so many, might somehow again be spared.
…

WhitewaterBaldy Fire, Late Afternoon May 25
…
THE ANIMA FIRE FUND
Last year’s Anima Fire Fund was suspended even though the protective measure were undone, because the immediate threat from the Arizona fire had ended… in some places only 7 miles from our property’s edge.  Now with all gratitude and humility we are opening it back up for donations.  We would prefer that any help come primarily from folks who can really spare a contribution, so we’re not causing any hardship by accepting the gift.
Project Progress
Monies raised last year paid for the purchase of a high-volume water pump and storage tank, plus wages and much of the needed pipe.  The pump has already been used to fill the water storage tank twice, water which has been used by Loba for the kitchen and washing as well as keeping our few planted beds green.  The main pipe lines have been laid and much of it covered, and the smaller feed lines to the sprinklers are nearly half done, lying in dug ditches awaiting fittings and burial.
Project Needs
To effectively prepare for the possible arrival of the Whitewater/Baldy fire, we will need to be able to invest in:
-3 more high pressure hoses with quick release fittings
-Modification of a small trailer for permanently mounting and easily moving the pump
-Additional pipe and fittings
-Fabrication of an external fuel tank so the pump can power the sprinklers longer, unattended
Any additional monies raised will be used to try and purchase heat-reflective wrap to cover and protect our guest cabins, the Gaia and Gifting Lodges.
This may or may not be the fire that finally gets us, sweeping away the green wildness we have grown.  But even if it does, then with the help of those of you who contributed last year and those who can help now, we may have only bear the expense of protection instead of the cost of replacing school infrastructure, belongings and home. Thank you!
To contribute to the Anima Fire Fund, either send a postal money order in any amount to:

Gretchen Geggis
PO Box 688, Reserve, NM 87830
or make a PayPal instant payment by going to:
www.PayPal.com
Enter the amount as a personal “gift” and send to:
TWHKiva@gmail.com
(Kindly Share)
Posted by Lauren Raine at 10:16 AM

OH... dear, dear, not again!! I'll pray. Makes me wonder if we really need to be nomadic, but I am such a sacred home and land nurturer. Sending much prayer and dreams of a safe sanctuary!

Now, I'll try again! Was this fire caused by arson? It looks ferocious.

Thanks so much Valariana. Trish and Rob, I don't know. Last years great fire was caused by campers who left a campfire unattended. The problem is that this time of year, before the monsoons come in July, everything is a tinderbox because there is no water. Poor forest management, climate change, and other forms of human interference with the environment has been responsible for this increasingly impossible situation.

Wilderness fire one of the ugliest scenario of fire. There are no chances of controlling such flame by our equipments. Lots of animals are dieing in such accidents every year.