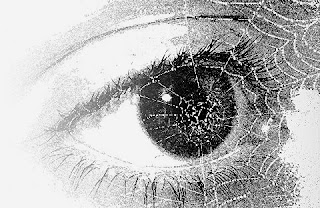 "We do not need to invent a ground of connectedness, but only to realize it.  Inter relatedness has been experientially grasped in myriad cultural contexts - yet the force of modernity continually denies and degrades it."


Charlene Spretnak, from The Politics of Women's Spirituality 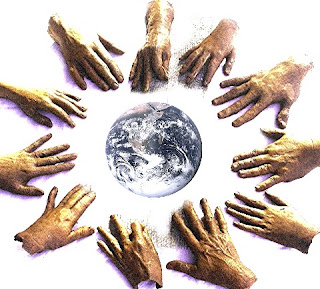 Where will the "5th World" begin?  Will Spider Woman, called also Tse che Nako, "Thought Woman" in some Pueblo traditions - will She come again, to help humanity find our way once more into the Next World?

I believe so, truly I do.  It seems important to honor Spider Woman today, so I felt like sharing some little of what I know of Her again, on the advent of 2012, this great moment, this "Fifth World", this  New Age.  I feel her threads, brushing against my cheek, my hand, these days.
As I sit in this internet cafe, the buzz of electronically connected and connecting people all around me with their laptops and devices....I can't help but feel that, ever inventive and working with the times, the World Wide Web....is Spider Woman's latest appearance.  She's weaving all around us, waking us up.

Pueblo mythology tells that when each of the 3 Hopi worlds ended, it was Spider Grandmother who led the people through the sipapu, through the kiva (or birth canal) into the next world, the "4th  world".  Now, according to the Hopi and Mayan calendars (and this is no coincidence, since they are related cultures)....the 4th World has ended.  The Fifth World is beginning.   With so many people tuned to the "2012" myth, which has reached almost archetypal proportions thanks to Hollywood, it seems strange that so few know of Spider Woman, the universal midwife.
But, that's kind of Her way.  She stays hidden, until people are ripe to listen.  She doesn't waste her time.  She comes when the time is right, the labor pangs have begun.

"It is through the poetry of myth, mask and metaphor Spider Woman comes alive. The rock surface of an ancient petroglyph site is merely a veil between the observer and the other transcendental realms; it becomes a portal through which to enter the world of Spider Woman. As others have written before me: "She is with me now as I tell you these stories."

Carol Patterson-Rudolph, "On The Trail of Spider Woman" (1997) 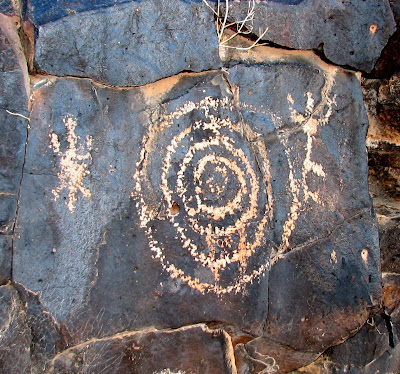 As anthropologist Carol Patterson-Rudolph has written,  to the Navajo Spider Woman ((NA ASHJE’II ’ASDZÁÁ) represents an initiation into a mature, integrated way of being.  It could be said into a  more interconnected way of seeing, a "webbed vision". She is able to bridge the sacred and prosaic dimensions of life - but for those who are not ready, Grandmother Spider will remain invisible, just as invisible as her powerful but transparent threads, as insignificant as a tiny insect,  so small she can sit on a shoulder, or patiently wait in her web,  and never be seen.
And yet, for those with eyes to see, her Web is everywhere, and she will offer wisdom with a still, small voice, carried in   the breath of the wind.
Hopi legend tells that  each previous world was destroyed when humanity fell out of harmony with the divine plan.  Not unlike the Biblical Great Flood, in some versions of the legend, the world became, once again, full of chaos and war.  At last a terrible deluge destroyed everything, and only a few survived,  led  by Spider Woman to the next higher world, changing in many ways as they  as they emerged.  In the most prevalent  version of this story,  Spider Grandmother caused a hollow reed to  emerge into the Fourth World at the sipapu, the hole in the earth (I think of the Omphallos, the world navel of ancient Greece)  from which the people emerged as they climbed up the reed into this 4th world. 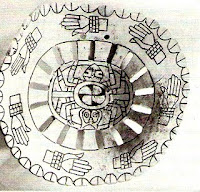 The earliest "Spider Woman" image is found among the Mayans, and she is clearly also identified as Mother Earth.  Among the Pueblo peoples of the American Southwest,  Grandmother Spiderwoman is also called "Thought Woman" ("Tse Che Nako"). She is a Creatrix deity as well, and can be  found among the Navajo, the Lakota, the Zuni, Hopi, Cherokee............she is ubiquitous.  Images of the  "Spider and Cross" are found everywhere among prehistoric peoples throughout the South and Midwest, the Mississippian mound builders.
In Navajo rugs, “Spider Woman’s Cross” is a symbol of balance or completion.  To this day, a bit of spider web is rubbed into the palms of infant girls, so they will become a good weavers.  Spider Woman's threads weave from the center of life.  We are all Relations......."look" she seems to instruct, "see the pattern, see the threads, the symmetry.  Weave your lives from there."

In his book on Hopi religion,  John Loftin writes that:

Thought Woman as creatrix spins the world into being with what she imagines, with the stories she tells about the world, spun from her very substance, her silken threads that are invisible, yet stronger than steel.  Threads organize into patterns, ever expanding in complexity and scale. Tse Che Nako weaves,  sharing the creative power with all of her descendants. We are all "Spider Woman's hands",  weaving, bringing the imaginal, transparent web into being.  There is a contemporary Hopi prophecy circulating on the web these days that says "the time of the lone wolf is over."  I agree.  The esoteric knowledge of our inter-dependancy, and of our quontum creative power, is no longer hidden, it's right here, before our very eyes.


Tse Che Nako, Thought-Woman,  The Spider   is sitting in Her room now  thinking up a good story.   I'm telling you the story  She is thinking." Keresan Pueblo Proverb

A spiritual paradigm is founded upon mythic roots - the "warp and woof” from which ideas grow. Following the metaphor  Katherine Keller has provided in her book "From a Broken Web" - can we can find contemporary mythic models that allow us to envision our world as it really is – a shimmering web of interconnected relationships, an ecology of being. Can we find ways to "see the world with a webbed vision”?  Can we take Spider Woman's gift, and emerge collectively into the 5th World?

As we each  rub a bit of spider web into the palms of our hands at the New Year,  wishing all my friends strength, vision, and loving Relations. 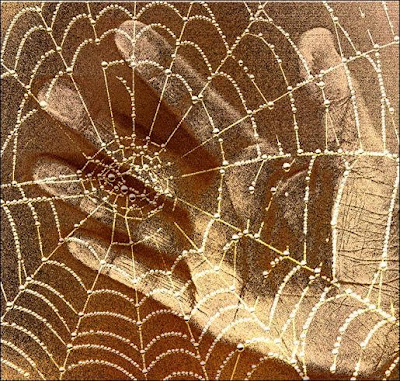 "The question is not so much "What do I learn from stories" as "What stories do I want to live?"   Insofar as I'm non-dual with my narratives, that question is just as much, "What stories want to come to life through me?"

Hi Lauren, I loved reading this post.... I had a student this semester who kept returning to the spider web as an image. Looking forward to sharing this with her that she might make some connections - HA, or, weave some webs. I'd forgotten that idea of a reed in the omphalos - I GET that on some deep level.

Abundant blessings to you during these intense times!

Hey, the same blessings to you, fellow weaver, in your lovely snowbound forest!

Great post! It's spider woman's year. Happy 2012 to you, Lauren. I can't wait to see what you create this year!