"Today we seem to prefer the word depression over sadness and melancholy.  Perhaps its Latin form sounds more clinical and serious.  But there was a time when melancholy was identified with the Roman god Saturn.  To be depressed was to be "in Saturn", and a persona chronically disposed to melancholy was known as a "child of Saturn"......melancholic thoughts are deeply rooted in Saturn's preference for days gone by, for memory and the sense that time is passing.  These thoughts and feelings, sad as they are, favor the soul's desire to be both in time and In eternity, and so in a strange way they can be pleasing."


Thomas Moore, "Care of the Soul"

My depression fell over me like a heavy grey blanket, making it hard to move.  What I found depressing as well was how very little permission I had from others, or myself, to experience it. Spiritually oriented acquaintances I tend to avoid at such times, because depression is not very positive or uplifting, and you can feel like a leper.  Even my former therapist (seemed) to look at me like was a kind of lapsed alcoholic, and suggested a self-help book by a popular psychologist, and to begin her exercises right away.

To be honest, I thought wistfully of a long ago bar I used to go to in a long ago town, and the fine therapy of crying in one's cups with a fellow sympathizer.  In retrospect, there was some real use to that.

In a culture that demands an impossible standard of  constant economic growth and individual productivity, where pharmaceuticals promise relief, and a better, newer, probably more expensive self-help workshop to transform your higher consciousness and find lasting bliss is in order........I miss  simpler times when I had the Mole's Eye Bar, and a vodka tonic.

So I stayed home alone, and let my depression be, and invited Saturn and Hecate to visit.

That intense time before the Solstice, it seems to me, is "Saturnine", the month of endings, celebration of the dead, composting of the year, going underground, dreaming, life review.........age. What does "age" mean?  Memory, slowing down, reflection, loss.  Sometimes wisdom, sometimes depression. 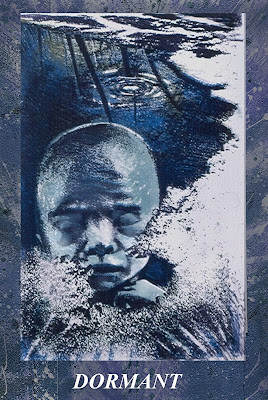 Why must we always "keep up"?  Should we feel shame, failure, if we "fall behind"?  I recognize that we have responsibilities, obligations.......but inner life doesn't always respect such timetables.  Where can people "falling behind" go? Retreats, dream temples, monasteries, where the "fallen" can go to rekindle their souls?  Is there a garden shrine at least, a compassionate space, a psychic allowance within  the whirlwinds of our lives where we are not punished for "falling apart" just a little, for being "depressed", where some inner or outer voice isn't telling us we're "losers"?

I find myself in increasing retreat from the continual "stimulation" of our time.  Some days I look at my computer with a kind of terror, because it represents such an overwhelming vista of possibility.  I now allow that.

And  I don't despise my depressions anymore, rather, I consider them worth listening to.  In fact, they sensitize me, restore my empathy, and compassion.

As everything seems to accelerate and accelerate, I, at least, find it harder and harder to touch things.   To touch the depths of the stories of our lives, to touch anyone, to relish and taste within the onslaught.  Somewhere beneath the pavement there are still those layers of history, layers that belong to lives that preceded us, old bones, old trails, leys and currents and the ghost of the hidden sea.   I sleep on all these stories, they want me to dream them, to open the conduit.

The pace, and of course the urban disconnect from natural cycles........leaves little room for the kind of Saturnine composting of spirit that a good depression can give, the  cyclical return to the dark that is, I believe, reflected in all organic systems...........to "compost". To rot, fall apart, not know, slow down, fall by the wayside, re-form, be re-formed by the organic, collective forces we are woven into within the cycles of the planet, and within our souls.


Roman gardens used to have lots of little shrines, and  a special shrine was devoted to the morose god, Saturn. A place, it was understood, one went to be alone, to brood, perhaps to grieve. A place to be melancholy.  The word "melancholy" derives from a word that meant "black bile", believed in the  middle ages to be one of the four "Humours", the four (like the four directions or cardinal points) whose balance was believed to determine one's emotional and physical state - those humors were:  blood, phlegm, yellow bile and black bile.  So here is the idea of balance, and that balance must include the dark as well as the light, the depressive as well as the enlivened.
As I get older, and my personal energy reserves are more concentrated and precious, I have come to believe that giving melancholy its due, discovering what the gifts of depression, taking time to allow the uncomfortable depths sometimes, not always, revealed in Saturn's solitary corner of the garden - is essential to nourishing, indeed sustaining, my spirit. Just as Romans understood the need to have a shadow-dappled seat dedicated to Saturn in the gardens of their lives, I have my own seat devoted to Saturn, devoted as well to Hecate, goddess of the underworld.  To make offerings before a shrine is a  invocation, and invitation.  To "take a seat" is another kind of opening.

Hecate, like Saturn, represents age.  She's an old woman, past menopause, past ambition, close to the door that separates this world and the other world.  In the story of Persephone, Hecate is the one who bears a torch, illuminating her passage through the dark caverns of the underworld.  I've always loved that metaphor. 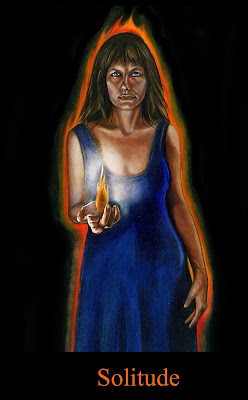 "In us is also a dark angel (Hekate was also called "angelos") - a consciousness (she was also called "phosphoros") that shines in the dark and witnesses such events because it is already aware of them a priori.........Part of us is not dragged down but always lives there, as Hekate is partly an underworld Goddess."

"The Dream and the Underworld", James Hillman


Hecate is the patroness of women (and men) who are no longer producing hormones. Hormones are very potent drugs that induce us to want to reproduce, and thus carry on the evolutionary, planetary urge. When estrogen or testoserone is gone one's consciousness changes.  I've heard lots of women say that  life's illusions seem to peel away. Veils that have muffled all kinds of personal illusions, beliefs, and ideals and drive fall away ..........and there you are. Depressed sometimes.  Revealed. Clarified. Ignorant. Thankful.
Occasionally, I even notice phosphorescent threads of wisdom, gleaming, candid in the dark and lovely mystery of it all.  I think any new mask of Hecate might be both black, and white.  Maybe Hecate, in her mask and role as old woman, may represent the SOUL aspect of self.  "Part of us is not dragged down, but already lives there........." as Dr. Hillman said.

Already lives there, the gestalt, the storyteller as well as the story. Looking at the yin/yang symbol I wear on a ring, I remind myself that somehow the various parts of my being are, like the dark teardrop and the white teardrop, in flux and co-creation. This weaving of story is not only enlightenment, it is also "endarkenment", the self that waits, is circular, un-named, yin. That "already lives there."
I think to honor her, to honor Saturn, we have to stop blunting the descent, which is hard in a culture that so powerfully rejects the idea, no longer even has a recognizable "god" or a "goddess" to help initiates find their way.  We don't see "melancholy" as about balancing the humors, we see it as something inconvenient, wrong with us, we're ashamed, we're guilty of being "negative", we want it to go away as quickly and efficiently as possible so we can "get back in the race". 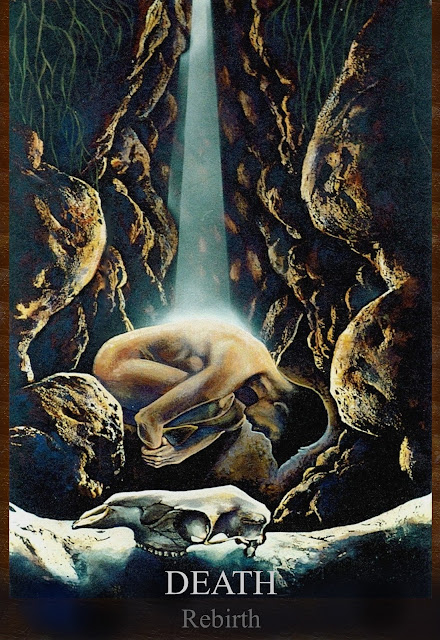 Thank you for posting these wise and revelatory notes on a universal human condition all too often trivialized by cultural ignorance of life itself. - Antero

Thank you Antero. Your wise and iconoclastic work, with its many layers and depths, inspired and provoked. I'm honored to hear from you.

Ah...Thank you. I welcome the dark and want the world to just leave me to myself. That is not going to happen. The tension created by my need to be in the underworld while the surface world wants me to continue to participate...and even increase my contributions (holidays), can sap my energy drastically. It is the darkening; time to dream, reflect ...pet the cats and drink tea. It is time for candles, sage, cold crisp starry nights, changing landscapes, dreaming plants. These all call to my spirit to stay in Sacred Time.
The world is crazy and we are the ones who need to bring the wisdom forth. I love your thoughts about Hecate. Thanks so much!

Thanks again.........funny, I notice I almost immediately put up another article to "cover" this one, feeling very vulnerable about expressing these thoughts. I think this bears further investigation..........have found Thomas Moore "Care of the Soul" very helpful and affirming about the alchemy of these states of being.

Wow, this is a beautiful post and beautifully illustrated. The Saturn reference is so interesting. In astrology, Saturn is the heavy-handed planet that demands that we be responsible, fulfill our obligations, and work, work, work. Yet, without Saturn, the structures in our lives would collapse. So even though Saturn is heavy-handed, the planet serves a If you'd like, send me your birth data, Lauren, and I'll take a look at your chart.

Need: time, date, place of birth and where you live now (for transits). It sounds like you are under a heavy Saturn transit. So even though it's dark, there is light at the end.

Thanks so much Trish......what a kind offer! I will take you up on it!

Depression? Call it what you will, the beauty that came from you in this moment was soul touching, even uplifting. I love this post, thank you so much Lauen.