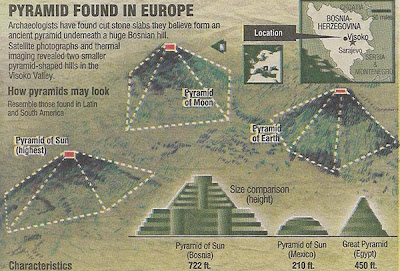 When I was in Glastonbury, and attending the Symposium, everyone was much excited about the Bosnian Pyramids, a topic that has only become newsworthy for the past 5 years or so.  I had never heard of them, but the prospect of a huge ceremonial complex, consisting of 3 pyramids and some other possible structures in Bosnia is now becoming acredited by the archeological community, thanks to the work of Dr. Osmanagic, a Bosnian archeologist who has studied extensively the pyramid complexes of South America.  He is  currently teaching in the U.S. as well as excavating in Bosnia, and he is responsible for naming them the "Pyramid of the Sun", and "Pyramid of the Moon".

Apparently (surprise!) some studies have shown that electro magnetic energies are different around, and within, pyramids than normal earth energetic fields.  It could be possible that when ancients built pyramids, a phenomenon found throughout the world, they were demonstrating an understanding of geomancy  we've lost, an understanding, perhaps, of how to focus and utilize geo-magnetic forces and "earth currents", possibly to promote shifts in consciousness, facilitate trance states, and for health benefits as well.

What's surfaced recently about the Bosnian pyramids is that they may not only include the largest pyramid in the world, but also their antiquity may be astoundingly ancient.  Dr. Osmanagic has sought extensively some kind of  organic material on or within the pyramids to be used for radiocarbon dating,  in order to  determine the approximate age of the structures.  Finally, in 2010 excavations,  organic materials have apparently been found (at Sonda 20)  on the "Pyramid of the Moon" Pyramid. The  remains were found in the surface layers of some of the large stone blocks that had been uncovered and were sent to labs for radiocarbon dating at the Silesian University of Technology in Gliwice, Poland.

Radiocarbon dating showed the organic material to have an age of 10.350 years........which could mean that the terrace of the pyramid might have been built 10.000 years ago. "This could  completely change our understanding of what European history and the first advanced civilizations were"  Osmanagic remarked.  For myself, I've always been fascinated by the legends of Atlantis, the mythic civilization Edgar Cayce said had its final demise 10,000 years ago.  It's been pretty much established that the legend of Atlantis stems from the ancient explosion of the volcano Thera in the island of Santini, an eruption that sent a devastating tsunami throughout the ancient world and was probably responsible for the demise of the Minoan civilization, about 3,600 years.. 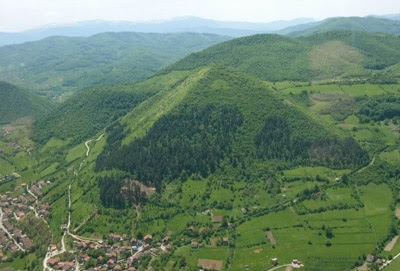 But if these pyramids are indeed 10,000 years old..........how astounding.  Perhaps they did represent a truly ancient civilization that had advanced knowledge, advanced enough at least to comprehend earth energies and how to focus them.  Fun to speculate............

I'd never heard of these pyramids. If they're actually 10,000 years old, it would certainly change our perceptions about the planet's history. Thanks for posting!

Interesting, now that some of the archeological community is getting more involved, I hope there's some real momentum for the research. Sure looks convincing!

Thanks to you both.......it really is fascinating. And if these structures are not only human made, but also some 5,000 years older than similar structures.......it's really mind boggling.

I'm about to post an article about stone circles and megaliths found not so long ago in Turkey, which also are seemingly impossibly ancient. Wow.....