In the Belly of the Goddess - Gobekli Tepe 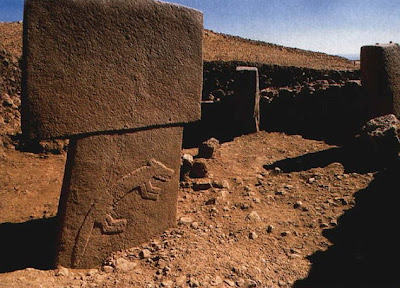 Since posting about the Bosnian Pyramids, I received an email from my friend Susan about another megalithic mystery I was not aware of,  the buried temples of Turkey, Gobekli Tepe,  a ceremonial  landscape that may very well be 12,000 years old.  Gobekli Tepe  means  "Belly Hill" or "Hill With A Navel".   According to Wikipedia,

"Göbekli Tepe is the oldest, human-made religious structure yet discovered. The site is located on a hilltop, and contains 20 round, (now) subterranean structures, four of which have currently been excavated. Each building has a diameter of 10–30 meters, and is decorated with massive (mostly) T-shaped limestone pillars that are the most striking feature of the site.  That neolithic people with such primitive flint tools quarried, carved, transported uphill, and erected these massive pillars has astonished the archaeological world, and must have required a staggering amount of manpower and labor.  In the structures, two pillars were placed in the center of each circle, possibly to help support the roof, and up to eight pillars were evenly positioned around the walls of the room.  Many of the pillars are decorated with carved reliefs of animals and of abstract enigmatic pictograms. The pictograms may represent commonly understood sacred symbols, as known from Neolithic cave paintings elsewhere."  Wikipedia

The structures on this site were built about 12,000 years ago (10,000BC) during the last ice age,  and intentionally buried about 8,000 years ago. No one knows who these people were, what the massive buildings were for, or  why they were buried. After 13 years of work only an estimated 5% has been uncovered.  Amazing........pyramids in Bosnia, and stone circles in Turkey, of such great antiquity.***
Turkey is near the area called the Fertile Crescent, until recently regarded as home to the earliest human civilizations of Mesopotamia, the "Cradle of Civilization".  These lands now so disturbed by conflict, revolution, war  and the struggle for  diminishing reserves of oil ,  the source of power for our civilization......are also the homeland of the ancient Great Mother, the lands of Innana, Ishtar, Astarte, Lilith, and the Shekinah, the feminine face of God in Judaism.

As so often happens, a synchronicity, a thread from the Great Web,was thrown my way when I received an email from a colleague, Israeli artist Dorit Bat Shalom, inviting me to join a group of artists exploring peacemaking in the Mideast on the same page with Susan's link to "Belly Hill".  What came to mind immediately was a conversation Dorit and I had long ago, a conversation that has a resonance for me with this mysterious site.


We were speaking of  the degradation of the feminine throughout western culture, religion, language.  When even God is gendered male to the exclusion of the other half of the human psyche, and further, defined primarily as a warrior god,  we are split and divided.  Humanity is divided against itself, and the Mother archetype is degraded.   Speaking beyond politics to an ancient wound,  Dorit asked,
"How can there ever be peace without the Shekinah?  The Shekinah, the Goddess,  has been driven away from the holy lands. We  can not heal without Her."

The Goddess has many faces - the Trilogy of Maiden, Mother, Crone, the Divine Feminine, the Dark Goddess, and Mother Earth.  Archeologist Marija Gimbutas pointed out the cultural bias of our time when she suggested that so called "fertility fetishes" (read that "paleolithic pornography") such as the famous Venus of Willendorf were not 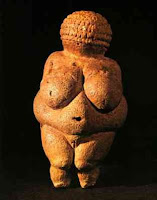 just fetishes, but probably represented instead the prime Deity, the "Great Mother".   Here is the immeasurably ancient womb/tomb idea, the original source of burial ritual, as well as death/rebirth ordeals of being buried alive  in shamanic societies.  New life, the primal mystery,  our ancestors observed, comes from women,  thus, life comes from Mother Earth as well, and returns to her womb again for rebirth. The Belly of the Mother.
Once again, one can only ask in awe, why would ancient peoples go to such difficulty to create vast megalithic ceremonial structures, charting and coursing the land with circles, pyramids,  avenues, creating sacred landscapes that were, perhaps, hundreds of years in the making, and thousands of years in use?  Gobekli Tepe, and possibly the pyramid complex being discovered in Bosnia, make Stonehenge, and Avebury, and the strange Callenish stones of the Hebrides.....seem modern.  Still, there seems a continuity.  I speculate that these sacred landscapes  were sited with a knowledge of, and reverence for,  the energies of the earth, the  geo-magnetic and spiritual forces.  They sited them to contain and utilize the "Geomantic Source"  for their spiritual life, which might very well have included the primal mystery or enactment of the   birth-death-rebirth cycle ( a relatively "recent" example of this was the Eleusinian Mysteries which lasted some 2,000 years, and whose origins may go back to Minoan, and even Neolithic times. ****)  The site's Turkish  name,  which means  "Belly Hill" or "Hill With A Navel"  is an interesting coincidence  when one considers this so ancient site in the "cradle of civilization".  "Navel of the World"......certainly, a site with revered circled enclosures,  which could have imitated the circles of planetary, seasonal life, perhaps, the round womb of the earth Mother.   Perhaps, a complex dedicated to the first and most ancient of human rites, coupled with an experiential understanding of the power of earth energies that we need to reclaim. 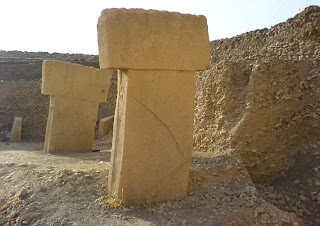 The author of one of the articles about Gobekli Tepe  I read made some (annoying) conjectures about the "Garden of Eden".

("Do these mysterious stones mark the site of the Garden of Eden?"

By Tom Knox   Read more: http://www.dailymail.co.uk/sciencetech/article-1157784/Do-mysterious-stones-mark-site-Garden-Eden.html#ixzz1eRkv1W6r)
I wish mythology was a part of all curriculum, because so few people take the time to explore some of the origins of the very mythologies that inform our culture and religions.  But then, people don't like to have their myths disturbed, because, after all, it's quite disturbing.  You just might end up having to change your worldview!

Long before there was a "Garden of Eden, original sin, or snakes that seduced Eve and hence left her responsible for all the miseries of mankind" there was the Great Mother and Her circular rites.  Gimbutas has suggested that before the Goddess was even personified as Hathor, or Isis, or Inanna,  She was the mysterious place and force of birth and death, Mother Earth.
In Biblical lore, the snake is "Eve-ill".  Sometimes the evil snake is personified as Lilith, the shadow Goddess who is a temptress in the Tree of Life, talking Eve into disobeying God.  When Patrick drove the snakes from Ireland, he drove out the earlier Druidic religion, and their reverence for the magical forces of nature.  But what is the snake in antiquity, why is this symbol so very  ubiquitous, once sacred, then with the advent of Patriarchal religions, profane?  In ancient Egypt we see the snake mounted at the forehead (the third eye or vision center) of all images of gods, goddesses, and royalty.  In fact the most ancient word for "goddess"  in Egypt was the same word as that for cobra. 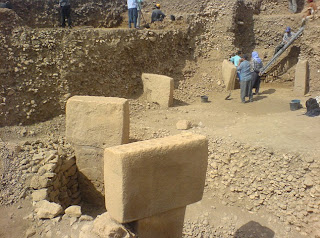 The snake (sometimes represented as dragons)  represents the sinuous, serpentine, moving energies of the earth - which move across the land like the passage of the wind, the  passage of water currents, like rivers undulating across a plain.  Since apparently early cultures always identify the Earth with the feminine, with the Great Mother and Her womb/tomb/rebirth cycle - hence the relationship between goddess and snake.  I believe the snake was also identified with geomagnetic phenomena, the leys and  invisible movements or currents of esoteric earth energies.
It may well be that we lost "Eden" not for disobeying  the rather arbitrary rules of a God who often displayed a bad temper, but rather, when human consciousness changed, along with the mythic structures that supported culture.  What might the ancients teach us now, in the 11th Hour of a civilization that is not sustainable, and has lost its primal reverence for the Great Mother, for Gaia?
*****
"Eleusis" probably derives from a pre-Greek (Cretan)  Goddess of Childbirth, Eileithyia or Ilithyia who was adopted into Greek religion.  "According to some authors her name does not have an Indo-European etymology, which for R. F. Willets strengthens her link with Minoan culture. "The links between Eileithyia, an earlier Minoan goddess, and a still earlier Neolithic prototype are, relatively, firm," Willets wrote. "The explanation is as simple as it is important. The continuity of her cult depends upon the unchanging concept of her function. Eileithyia was the goddess of childbirth; and the divine helper of women in labour has an obvious origin in the human midwife".  Wikipedia
***
I never rains but it pours, and another friend brought to my attention another possibly 12,000 year old monument complex, discovered off the coast of Japan.  What do we really know of  history?
Posted by Lauren Raine at 8:28 AM

this is fascinating. thank you. and you are so knowledgeable! enjoy your artwork included.

i wanted to be an archeologist at one time.

thanks Suki.....yes, myself also. Always wanted to go on a "dig". I'm also fascinated with the unknown past.

I would say that there is much we have forgotten, so when we find these megaliths today we cannot fathom how they were built. Yet I would not be surprised if it turned out to be us who built these wonders in honor of the great mother.

A mystical comment, UC, thank you. So much is surfacing, one wonders not only about her-story, but about the nature of consciousness as well when contemplating these mysteries.

Mythology really is vital to our understanding of ourselves and our world. Joseph Campbell did a lot in furthering our understanding, but you're right, it needs to be a core course in academia. Great post.
- Trish

The pillars in the sacred buildings are just like the sacred Talyots that were found on Menorca - said to represent the Goddess showing the womb and birth canal?