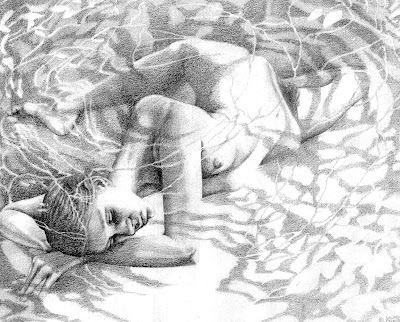 But on the night of the full moon
what is mirrored
in a still pool?


Felicia Miller (1972)
A friend I reconnected with several years ago, Felicia, a friend I knew more than 30 years before in the Halcyon days of Berkeley, when we were both very fortunate to be young in that creative ferment of place and time, a friend whose poetry travelled with me, like the paintings I did of her so long ago, down and up the road, companions..........passed away a few days ago after a long struggle with cancer.

When I saw Felicia in D.C. this past fall, she was very thin, very tired, but still generous with her time and thought. I remember pulling out one of her poems, and reading it to her and her friend. She said she hated it. I felt sad to think that all these years I've cherished work she abandoned, disavowed, long ago. Still, I think it was important that I read the poem, remind her perhaps of that work, that self............I don't know.

Brilliant, mystical Felicia was entirely a creature of water. Our meetings always seemed to occur by oceans, whether at a 1975 Rhododendron Festival near Mendocino, or in 2008 at a cafe near the famous surfers beach in Rincon, Puerto Rico . I remember her best on the streets of Berkeley, with her ubiquitous necklace of sea shells, telling us stories from her treasured, antique book about the Undines , the people who lived beneath the waters of the Danube. I've always secretly felt that Felicia was really a mermaid herself, one who left her element to walk on the land for a while, perhaps, never entirely comfortable away from her true home.

I painted Felicia several times, once as "The High Priestess" in 1975. By a strange and lovely synchronicity, I heard, just a few weeks before her death, from a long ago friend, Richard Meyer, who I also painted as a Tarot archetype at that time - Richard became "The Magician". When I told him about Felicia, he called her also, after 35 years.

The River Beneath the River of the World.

The River we all hear, some more than others. Felicia, I'll miss you. Swim free and wild, now.
We love you. 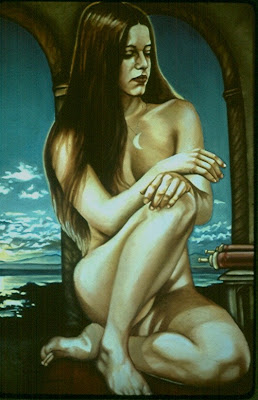 grasses in the sun

Someone was the Sun
calling from across
the little island fields

we turned and took the last
glimpse of the closing lid

I could not answer,
but only followed after
just some one's glance

along the rock path.

Did I see you?
feel your smile
as you
fell?

(it must have happened quickly)

but what was it that rose in you

"Then in the half-light of the canyon, all existence fades to a being with my soul and memories and the sounds of the Big Blackfoot River. Eventually, all things merge into one, and a river runs through it. The river was cut by the world's great flood and runs over rocks from the basement of time. On some of those rocks are timeless raindrops.

Under the rocks are the words, and some of the words are theirs.
I am haunted by waters. "

Norman McClean
"A River Runs Through It"

Lovely painting. I knew Felicia for about 12 years when she lived on the east coast, and I took care of her dog while she was getting treatments in Europe.

Felicia was always a kind person. A series of stunningly bad things happened to her over about a five year period. But she kept up an amazingly level of motivation during her illness, past the point where I would have given up.

I knew Felicia a little later on and had seen these poems before. I have only now discovered that she died.

I am glad she was in touch with you at the end.