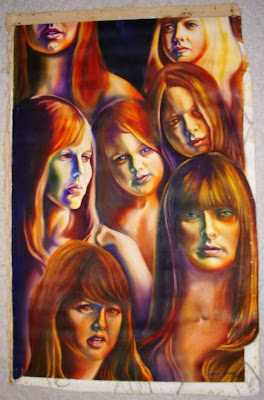 Here's one of those interesting things that happen with the internet......a little syncronicity. This photo of an unframed painting was sent to me by someone who told me it had my name on the back, and was given to him by his brother back in the late 1970's. He apparently carried it around, rolled up, for 30 years.

I had no recollection of either him, or his brother, who lived at the time in Santa Monica. But the painting is clearly mine. I have no idea what its travels have been, but it's good to see, as I prepared to teach my "Masks of the Goddess" workshop again, these Goddess "faces" surface, surprising me. I see that I was following the same kinds of threads, long ago, and had forgotten all about it, just as I had forgotten this painting.
Posted by Lauren Raine at 7:41 AM