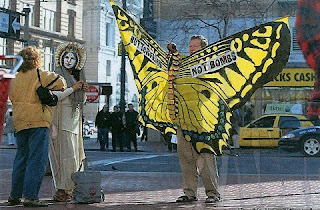 There is going to be a protest against acceleration of the war at the 8th anniversary of the war in Afghanistan on Monday at the White House. Since I happen to be here, I'm going.

The photo above was taken in 2003, just before the invasion of Iraq. There was a massive protest (over 300,000 people) in San Francisco - I participated with Alan Moore and his Butterfly Gardeners Association. For myself, I wore the "Mask of Sophia", and carried the Mirror of Sophia that we had used in our performance earlier, which was a ritual for Peace. The photo was in the San Francisco Chronicle.

Joan Baez sang, Martin Sheen gave a speech, and the sight of 300,000 people filling the streets down to the harbor was an amazing sight. As I remember, there were a million or so people here in D.C., and many more across the country. In spite of this protest, the war went forward, and continues. 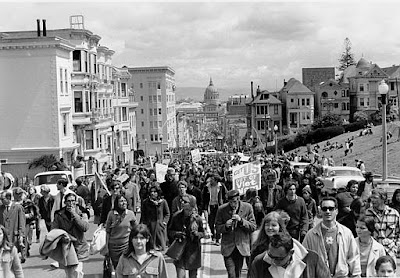 I marched in San Francisco in 1970 as well, against Vietnam. Joan Baez sang then as well. There were over 300,000 people then as well. Twice I've seen the streets of San Francisco overwhelmed with people. 50,000 Americans, and millions of Vietnamese and Cambodians, most of them civilians, died in those years. I could say more, but I won't, because history has, in my opinion, enough to say about the futility and horror of war.

I believe in non-violence. I do not believe war does anything except breed more war.

Here is a bumper sticker I saw on one of the student's cars that made me laugh, but has plenty of truth to it:

What part of "Thou shall not kill" don't you understand? .....God
Here's some info about the action: http://www.iraqpledge.org/
Posted by Lauren Raine at 4:30 AM

Hi Lauren,
My name's Madeline and I'm a high school student doing a history project on joan Baez and the anti-vietnam protests. I would love to talk to you a little bit and understand more about the marches from someone who was there! I'd love specify more in an email if I could. I'm sorry to inconvienievce you, thank you for taking the time to read this! Yor blog is lovely :)