A Mask for LADA, Ukrainian/Slavic Goddess of Spring 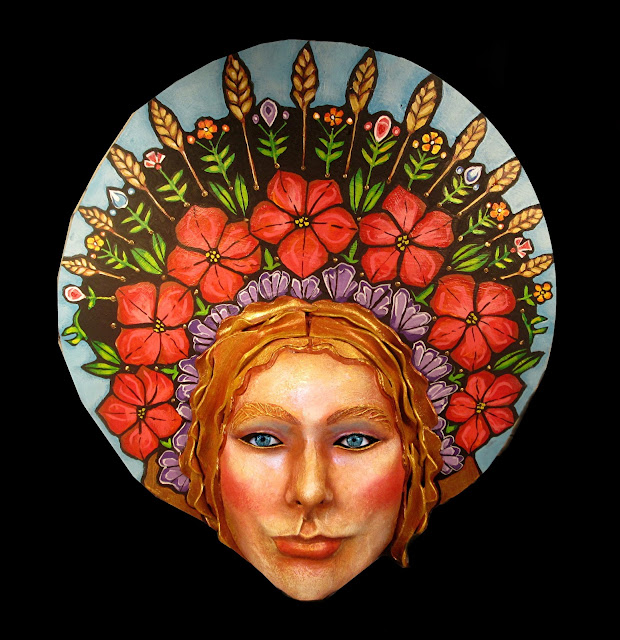 Slavic mythologies, religions, and folklore are very rich, dense, and have ancient roots.  The Goddess is everywhere in the folk arts, an ubiquitous pentimento underlying and winking through the ornamentation of the later Christian Church.  I made this mask, patterned after the astonishingly beautiful flowered head crowns  Ukrainian women make especially for the Rites of Spring and the Harvest time.  I chose the name LADA  for the Ukrainian Goddess mask I made, although there are  many Goddess names that might apply.  But Lada is very much associated with spring.  Here is some information about Her:  https://www.thoughtco.com/lada-slavik-goddess-4776503# 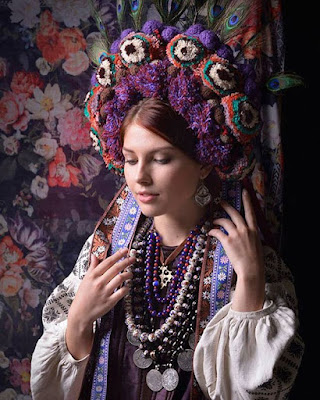 As you can read from the medievil priestly commentary below, Lada, like all manifestations of the Divine Feminine outside of the compliant, virginal Mary, was roundly hated by the good fathers and their  Father God, who had no mother, wife or daughter, and did not soil Himself with the lowly worldly concerns of Eve.  What a religion, to make the beauty of the world and nature "evil".   But just like Spring,  Lada of many names keeps coming back, bringing a trail of flowers and love and rebirth with her, the Lady who turns the world green.    https://www.thoughtco.com/lada-slavik-goddess-4776503#

"One should pay attention to those who say ungodly things today in dances or elsewhere in performances, consider unclean things in their hearts, shout out and mention the names of idols, and consider whether conversion to God the Father is possible. Certainly not. For it is forbidden to hear freely these holidays, which unfortunately celebrate according to what was left of the rites of the accursed pagans of our ancestors, unless for punishment, as once the shout of the inhabitants of Sodom and Gomorrah rose. For at this festival indecent exposure and other abominations, which the Apostle says should not even be named because of God the Father. However, due to the fact that preachers have arrived, such things now cease. There is no other name under heaven in which we can be saved. For a man is not saved in the name of Lado, Jassa, !Quia, Nyia, but in the name of Jesus Christ . 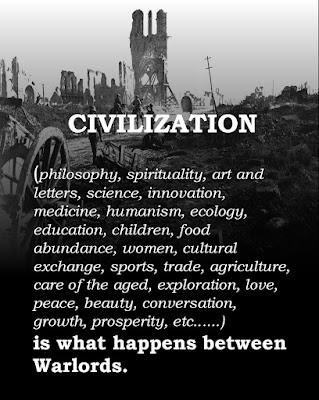 Such a joyless "salvation" for all of eternity......is not, I believe, something I would want!  No dancing, no lovemaking in the spring, no Celebrations!  Nor do I believe it was ever anything intended by the gentle prophet Jesus of Nazareth.
I pray that  Her essence bring some kind of peace, bring an end to the terrible war that has fallen upon the people of the Ukraine, as yet another tyrant, another monster of destruction, brings war and death even as the world tries to be renewed in the spring.  I am speechless with sorrow that such destruction goes on.  When I see images in the media of the refugees, carrying their children, their dogs and cats and a few possessions as they flee their home, I am unable not to cry for them.*  And I feel, truly, that patriarchy, the fragmented soul of humanity that has created such hatred of women and life and the Earth, reflected in the its dead eyed warlords.........is a fundamental cause for so much of the suffering in the world.
May the Goddess continue to rise in this time of ultimate need.
May She Restore the Balance.** 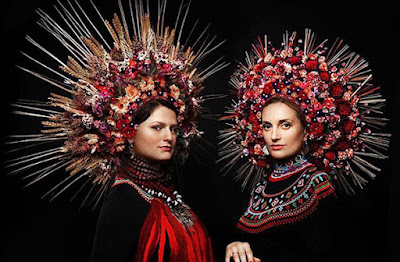 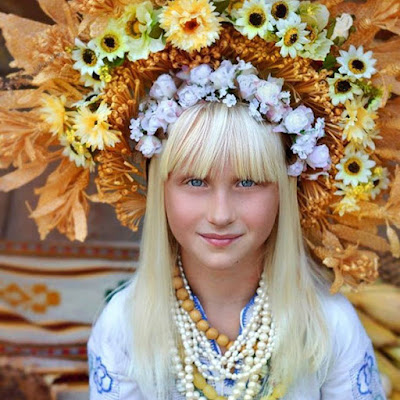 *
---https://www.fastcompany.com/90724577/how-to-help-the-people-of-ukraine-7-things-you-can-do-right-now.,   A link to resources to contribute to  in helping the people of Ukraine.
---If you have any friends in Eastern Europe, France, or the UK  I am passing on a link to this fb group - refugees trying to find accommodation.  Just thought I would pass this link along in case it touches someone out there who can help......... https://www.facebook.com/groups/699929631375624/
** Just this morning I read the following article by Carla Stang,  on FB, posted by Priestess Jackqueline Weller, that fits so perfectly into the theme of this post that I take the liberty of copying it here.  I will do it better justice in the future by making it a post in itself. 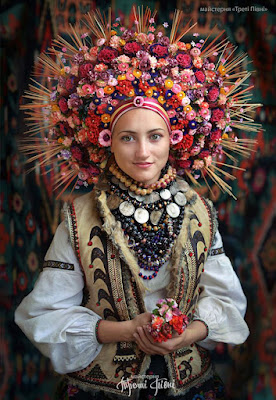 Mamrch tl7u atSpog0nu09 111:rh3hm6 PM  ·
THE MARAUDERS AND THE MISTRESSES OF WATER
As an anthropologist I take a long long view of this war and what I see is something stunning. This conflict is an echo of a thing terrible and crucial that occurred in exactly this place in ancient times, and which has been reverberating ever since. It’s little known that 7000 years ago western Ukraine was the cradle of Europe’s first civilisation, and in three waves it was invaded by people of the steppes of Russia and southeast Ukraine. The subjugation of this civilisation and the destruction of their peaceful, egalitarian way of life set the course for Western culture as we know it, that is to say, the culture of the West that we inherited is a culture of marauders.
It is no surprise then that we are outraged to our bones. We are witnessing the playing out of a primordial nightmare, the seed of the blasted tree that would grow into a history of misogyny, war and the horrors of colonialism. Which means what is being fought for is nothing less than the redemption of European culture, an ancient European culture which cherished the earth, children, women along with men, art and peace, a culture which was not only vanquished but purposely hidden and forgotten, which still grows its tendrils through present day Ukraine. In a sense what is being fought for is what the West once was, what barely survived of it and what could be once more.
Let us first remember.
Before the ziggurats and pyramids there existed from 5500 – 2750 BC the megasite cities of the Cucuteni-Trypillia or the Tripolye or Trypilsti people, with a population that at its height exceeded one million, in an area that extended through Bulgaria, Moldova, Romania and Ukraine. The largest of these settlements was in Ukraine near Kyiv and reached the size of medieval London.
Why is this not widely known? Why do the textbooks and Google say that the first complex civilisation was in Mesopotamia? First because the initial archaeological finds in 1885 occurred after those of the civilisations of Sumer and Ancient Egypt. Then because the research which the Soviets funded at first was then silenced by them because the finds did not fit with their ideology, research was stopped, archaeologists were convicted of being spies and many fled to other countries.
In the last few decades since communist rule, there has been a tide of scholarship and interest. What has been found continues to be astonishing and confounding. These huge settlements do not fit with theories about the Neolithic and about urbanisation. The sprawling settlements incorporated the rural into the urban, rather than being one or the other. And the intricate and sophisticated way they did this defies long held ideas of Europe as having nothing but a smattering of small, warring tribes.
“Under the earth were strewn thousands and thousands of images of woman” - Vikentiy Khvoika
Large well-made temples and houses, 90 foot quarries, trade routes, supply chains, inventories. Agriculturalists, potters, blacksmiths, gold and coppersmiths and weavers. The largest burial of worked gold ever found anywhere. And everywhere images of throned women, and images of men with exquisite expression, carvings of stone so beautifully made one can see the tenderness of the hands that hold the baby. Every object used in every aspect of life is lovingly ornamented. Earthenware, ceramics, pottery, tools, vessels, dishes, pottery moulds, internal walls of houses painted in varying earth-colours, white, red, ochre and black, and sometimes carved with incisions or encrusted with symbols of nature sun, moon, stars, rain, snakes, birds, bulls, trees, branches, seeds, flowers, water and with magical symbols circle, teeth, rhombus, crosses, endless meanders, snake-pattern.
I could go on and on about this culture where nature entwined and pulsed through every aspect human life. But for brevity’s sake let us continue and add that this was a culture which depicted councils as concentric circles of throned women. And rituals of initiation, fertility and farming by women and men who venerated before all others the goddess in forms of crone, lover, mother and young maiden, bird and serpent but also the animal-masked god-man, ecstatic dancer, the one-eyed ancient one and the divine child. No images of war. There were no slaves. And the priestess and priest who wore the gold at public events went home to an ordinary house.
From around 3000 BC in successive waves down came the Proto-Indo-Europeans, riders on horseback. And conquest included the things we have learned to be familiar with, murder, rape, deliberate obliteration of local culture. In this way the semi-nomadic pastoralists of the steppes, carrying with them their sky gods and patrilineal and patriarchal social systems, destroyed the great Neolithic civilizations of the 4-5th millennia. I wonder at how many cultures the survivors seeded elsewhere (I know of a few), in how many of us ancestral memories stir, and how far these survivors were flung.
But archaeologists agree too that the land of the Trypiltsi has been tilled without cease since these ancient times, and just as under this earth the lives of the Trypiltsi were preserved, so were they in the people of Ukraine, the celebration of singing children and men, of nature and powerful women, flower on clothing and stove, the meandering line of water on the wall, beliefs and attitudes that just would not die.
May the people of the Mistresses of Water wash the Maruauders away, and may the West find the spiralling way back to the dream before the nightmare, of the beauty of what it might have become and could become again.
Artwork by Vsevolod Ivanov
Posted by Lauren Raine at 6:19 AM

So beautifully said! It is as I have studied and discovered, much to our despair. May we find a way out of this 5000 years of disaster, in this great moment of transition! Blessed be all beings.

So beautifully written, just as I have studied and discovered. May the last 5000 years of disaster and violence come to an end very soon, in this great time of transition and change. May all beings be blessed with a new joy and security.