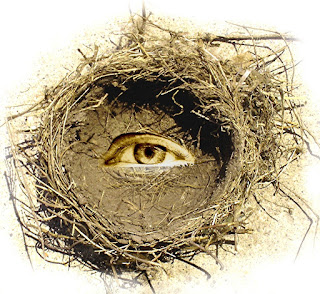 “Hope now lies in moving beyond our past in order to build together a sustainable future for all the interwoven and interdependent life on our planet, including the human element.  We will have to evolve now into a truly compassionate and tolerant world – because for the first time since the little tribes of humanity’s infancy, everyone’s well being is once again linked with cooperation for survival.

Our circle will have to include the entire world.

I am a long time fan of science fiction (and fantasy), and whenever stressed prefer to retreat into other worlds, dimensions and planets.  2020 has  been a long, hard year for many, and I am no exception.  Covid19 pandemic and resulting fear, division and isolation, record heat in my desert home as a result of global warming, the depressing sight of seeing the American experiment in democracy in the  hands of a would be  dictator and a corrupt Republican oligarchy, and  add to this  a year of personal health problems (I recently had major surgery to fuse my spine, and am currently recuperating).
So much chaos, so much uncertainty, so much suffering in our world now.  And yet, perhaps, there are seeds of transformation on a very large scale within that chaos.  I hope so, I pray so.
I've been doing a lot of retreating these days into beloved  familiar worlds that feature unimaginable aliens, fey dimensions of ephemeral beauty,  and plenty of sword and sorcery!  I might add that I am not a reader who requires new material all the time................if I love a novel, I will visit it over and over, each time finding new landscapes  that help me to better understand and inhabit it.  I have never been one for whirlwind tours. 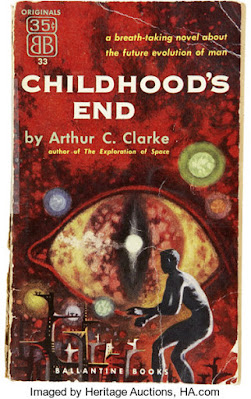 Two worlds I re-visited this summer were Childhood's End, (1953) a classic sci fi novel from the 50's  by Sir Arthur Clarke, the same author who wrote Sentinel, the story the famous film  2001 - A Space Odyssey was based on,  and a very much more recent one,  The One-Eyed Man  (2013) by  L.E. Modesitt Jr.   Lately I've found myself  thinking about both novels as rather prophetic metaphors for where we are as an evolving global humanity at the very threshold of our potential evolution from tribal, humancentric, and national identities to a new paradigm  within an inter-dependant global ecology.
Arthur Clarke always wrote about sweeping  galactic civilizations  and mysterious forces that spanned eons, and his  1953  novel, Childhood's End  is no exception to his extraordinary imaginative powers, although aspects of the novel are dated.*  A 2015 SyFy miniseries (which I have not seen) was inspired by the novel as well.  The story concerns a chaotic, frightening  time in the near future in which something is happening on Earth - because, although it is not apparent, humanity is beginning  to evolve.  A strange race of aliens turns up as cosmic "midwives" to bring peace, prosperity, and ultimately to assist in the process of what will later be revealed as the end of humanity's childhood and it's next evolution as a transcendant collective mind.

"The idea of a ‘living universe’ is not a new perspective. More than 2,000 years ago, Plato described the universe as a single living creature that encompasses all living creatures within it. In this view, we live within a living system of unfathomable intelligence, subtlety, power, and patience. In turn, we appear to be evolving expressions of that living universe, infused with a knowing capacity or consciousness and with an existence that is largely non-material in nature."
......... Duane Elgin

While I doubt that any benign space aliens are going to turn up to help us out in our time, now,  of collective adolescent crisis, reading this novel again after so many years seemed  never the less prophetic.    I think on the "New Age" movement of the 80's, my own firm  belief at that time in the "dawning of the Age of Aquarious",  and the interest so many had  in the Hopi Calendar and the Mayan Calendars that emphasized the end of the "4th Age" as we now enter into the beginning of the "5th Age".  This is, indeed, an extraordinary time to be alive.
We have become a fledgling global civilization - how amazing, to think that I can instantaneously talk to someone in Africa just by pulling out a little hand held device in my purse!   That I could get on a plane, and in a day be in England - and equally, that now a virus originating in faraway  China within a year has become a global pandemic.  That we, a global humanity, and not volcanos or big meteors, are causing our planet's glaciers to melt.   Our "adolescent crisis" is causing  mass extinction,  and whole countries to become unsustainable of life within not millenia, but a few decades.  That I live in a country so obsessed with  patriarchal, tribal authoritarian  power that it invests nearly 60% of its tax base on the military instead of humane resources, and possesses weapons capable of destroying all life in one grand bid for "alpha male" status ........... is also not lost on me.
As a collective humanity, we are indeed like children with a gun.  In all of our diversity, we face  an evolutionary crisis we MUST  evolve to deal with, and time is running out.  This on every level - from civilizations that prioritize sustainable ecological technology to re-visioning, or inventing, religious systems that are not based on ancient tribal war gods and renunciation of the Earth.   At its foundation must be an INTEGRAL, WHOLISTIC paradigm that recognizes and serves the inter-dependancy and common good of ........ well, all living beings.  Which, it seems, includes the entire Universe**.  I believe the children of the future will, as Clarke imagined,  will share a form of collective and non-local intelligence  necessary to human evolution, indeed, human survival.  Perhaps, the World Wide Web, for all of its problems and failings, is never the less the first demonstration of that.
Childhood's End. 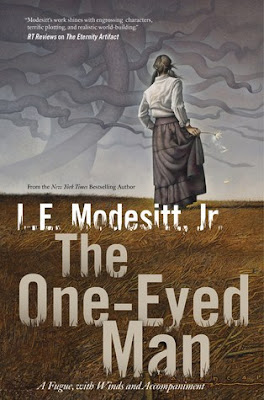 The second novel, much, much  more recent than Childhood's End (2013), was written by L.E. Modesitt Jr.  in response to an illustration (it is on the cover of the book).  He was asked to tell a story based on a painting by the wonderful visionary artist   John Jude Palencar ,  and what a story he spun!    The One-Eyed Man  is  about a planetary ecologist,  living in a future time when humanity has colonized planets throughout the galaxy, who decides to accept a job  on a distant planet called Stittara.  Stittara is a strange planet indeed, but it has  nevertheless been colonized by a population of human beings  with their very human conflicting ideologies,  and corporate entities preoccupied  with as much intrigue, secrecy, and power politics as anything we can see today.

"Dr. Paulo Verano is a freelance ecology consultant who is just emerging from an unpleasant and financially disastrous divorce. When he is offered a consulting job on a faraway planet, he jumps at the chance to escape the ruins of his personal life, even though given the distance involved and the travel time dilation, it’ll be 150 years later if/when he returns home. The job itself is intriguing: Verano is tasked with studying the ecological impact of the human presence on Stittara, the faraway planet that also happens to be the main source for the anagathic drugs that have extended human life spans considerably.

Once he arrives, he quickly becomes entangled in a complex net of political and corporate relationships. Stittara is a mysterious planet with many puzzling geological and ecological features, not to mention a colonization history dating back to well before humans first landed there. Mysterious creatures called “skytubes” that look like floating, translucent tentacles make their incomprehensible ways across the sky. Most of the official population lives in underground facilities to avoid the planet’s abnormally destructive storms.  In this very alien-seeming human environment, Verano must use all his personal and intellectual skills to try and uncover Stittara’s many secrets.  Verano is the titular one-eyed man, king in the land of those who are blind to the consequences of their actions."

Ultimately, what our out-planet ecologist discovers about Stittara is something vast,  astonishing, and  terrifying - and it seems that no one,  except him, is able to see it.  "In the land of the blind, the one-eyed man is King".  Because what he learns is that the entire planet  is not an isolated system of ecological niches, but it is alive, intelligent,  evolving - and self-protective.  Human beings, like other vanished  races before them, interfere with the well-being of Stittara at their own risk.
May the near future of those who dwell on planet Earth listen well to the "one eyed men" (and women). 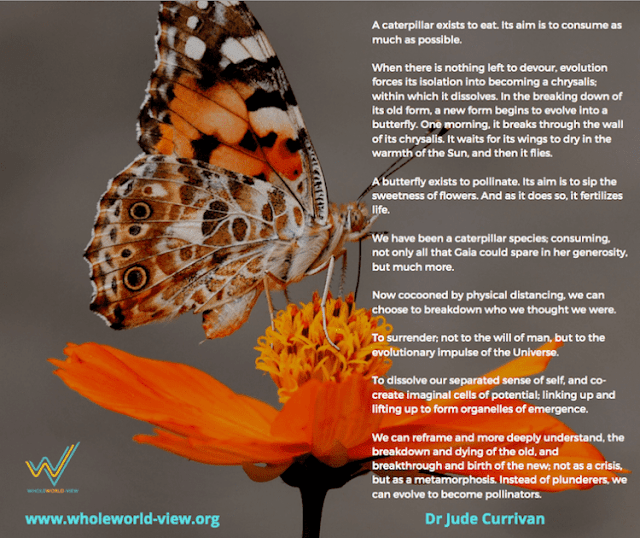 * No important female characters. and a dismissal of the Earth as holding anything other than human  life  (man-kind) as (man-kind) ultimately "rises up" into the transcendant beyond.  (indeed, it simply vanishes in the end having "served its purpose") This was very much the paradigm of the 50's, and I do not fault Clark for seeing the world with the limited eyes of his time.  Gaia Theory, even Environmentalism, came a decade or two later.