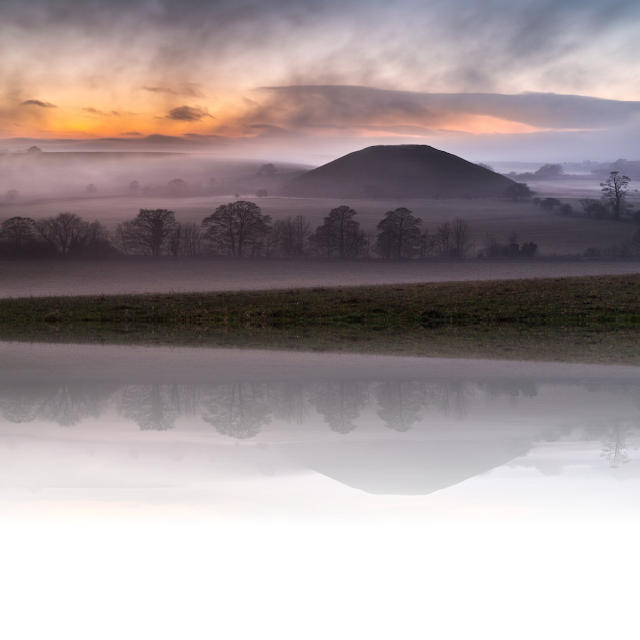 I was looking forward to presenting this at the Association for Women and Mythology Conference in New Mexico, but unfortunately I have had to cancel because of illness.  But I just felt like posting it again anyway................brings back the revelations of that wonderful trip!

This fall I attended  a  conference on  sacred sites, Pilgrimage,  and dowsing in the UK, and  continued my visit as a personal pilgrimage, visiting  Avebury, Glastonbury, Arbor Low, and other sites.
After a 15 hour flight from LA, I waited in line 2 hours in Customs, then  made my way  to Paddington Station in London, then to Swindon by train, finally to Avebury by bus.  Wholly  exhausted  I stepped from the bus to see, perfectly aligned with my sight,  rising from the mist,   the great prehistoric monument  of Silbury Hill, the mysterious  Omphalos of an ancient  world.

When I saw Silbury through the mist, what opened before me was a vision of a time when the entire landscape was the  sacred body of  the deity,  a cyclical mythos  of an animated Earth that ensouled and enlivened and enstoried every hill, spring, river and forest within a cosmology of conversant belonging.

Situated just south of Avebury, Silbury Hill is Europe's tallest prehistoric structure.   Michael Dames, in his book THE SILBURY TREASURE,  demonstrates that Silbury, like other "neolithic Harvest Hills" associated with nearby henges and standing stones,  literally represented the pregnant belly of the  Great Mother, and was associated with a certain time of the year, in particular, the harvest of July/August.

Silbury Hill is part of the Avebury complex, and  has been excavated over the centuries, never once  finding the “great chieftain’s treasure” which it was assumed “must” be there.  We now know that its  interior holds grains, turf, and animal bones, with no evidence of human burial at its core.  Silbury was  surrounded by a henge or moat of water, which Dames points out actually forms the shape of a squatting or birthing  woman in profile.     He likens the "Goddess form" of the henge  to similar ubiquitous Goddess sculptures and sites associated with  Cornwall, Ireland, Scotland, the Orkney Islands, the Hebrides, the Isle of Man, Brittany......... and related stone works as far as the mysterious Temples of Malta,  or the barely excavated stone circles of Gobekli Tepe in Turkey.

Why has this interpretation of Silbury never been seen before?  Because, Dames points out, to do so one must make a paradigm shift.  “Silbury “ he writes,

“conveys a philosophy which is of exceptional relevance to the modern world.  Silbury has been reduced to an enigma because of the  attempt to impress upon it concepts such as kingship, personal property, and individual male glory. Who put “King Sil” into Silbury?  We did, because we wanted him there - a superman chieftain with a super treasure and hundreds of slaves,  so vain, so aggressive, so acquisitive, so preoccupied with eternal fame, that he could provide us with a monumental tomb and treasure.  All treasure finding  attempts have failed because the builders belonged to a society for which such concepts had little importance, or even meaning.  And yet, since their compelling priorities are not entirely absent from our values, we can appreciate something of what the original Silsbury treasure was, especially since the future of our own civilization may give us urgency and humility to tender our investigation.”

When I later walked  the Avebury complex I experienced  the  intensification of  life force vitality I have come to recognize  in  places of numinosity and  telleric force.  There is no doubt in my mind (or body mind) that these  sites marked places of intrinsic geomantic power.  Stones were placed there because of the qualities of place, and they were positioned as well to  intensify or channel the  animating  Earth energies  present, as well as aligning with cycles of the Solstices, Equinoxes, moon cycles, and even certain star systems.   Sacred landscapes  also augment their healing or consciousness elevating properties  through the  interaction  of generations of  people with the "spirit of the land"  through geomantic reciprocity.

Geomantic reciprocity occurs  as human beings bring intentionality and focus to a particular place.  The communion with place  becomes more active as place itself  accrues story,  in the memory of the people, and in the memory of the land.   Sacred places have both an innate and a developed capacity to bring about altered states of consciousness, especially if people come with the open,  liminal state of pilgrimage or ceremony.  And myth   is the language spoken, if we wish to engage the numinous presence.

I also went to Glastonbury, to visit the Chalice Well.  Glastonbury  is  the  source of the Arthurian legends,  of Merlin and the Lady of the Lake.  Once the hill called the  Tor was actually surrounded by a lake.  During the Middle Ages it contained the great Gothic  Cathedral of Glastonbury.  Dowsers speak of the “crossing of the Michael and Mary  lines” at the Tor, as well as the more mutable “Dragon lines” of serpentine force .   Now called the "Red Spring" and the "White Spring", the source of the Chalice Well is still revered  by pilgrims.   The red color is iron oxide being deposited by the springs - the white spring deposits calcium, leaving a white tinge as it passes over.  The Avalonian springs are famous………….but in truth, there are hundreds of once revered historical wells and springs throughout the UK, many of them still named for St. Brigit, the ancient Goddess of the Isles of Britannia.

The Chalice Garden is  infused with  presence, with what locals call  the  Lady of Avalon.  I  took water to bring home, and walked around.  What popped into my mind  was odd - the words "Covenant Garden".

What could "covenant garden" mean, and why had I thought of it?  I remembered the  name of the English Goddess,  Coventina, from which the word itself may be related.  Later I considered that the word Covenant, like "coven", "convening" etc.  refers to a gathering of people to reach an harmonious agreement, which can include an agreement that is holy  in some way.    Such as the famous "Ark of the Covenant", which was supposed to hold writings and objects of veneration, as well as "God's sustenance for man" which was called Manna.   Manna was the food, variously described as different substances, that was provided to feed the people; it has also come to be used to mean a kind of numinous power.

According to Wikipedia, the Ark of the Covenant  is a gold-covered wooden chest  described in the Book of Exodus as containing the stone tablets of the Ten Commandments.  It also is supposed to contain “a golden jar holding manna, and Aaron's rod, which budded" .
Interesting:  holy food and a budding rod or tree.  The Garden is indeed a "harmonious agreement" between earthly beings.  And "Manna" is the food provided by the Garden, which I view as the sustaining power of  nature.  Aaron’s  "rod that blooms".............could also be seen as the ancient Hebrew and Middle Eastern  Goddess Asherah, who was often  represented as a tree, and  in the days of the old testament She was represented as a rod,  or "Asherah pole".  The practice of carrying "Asherah poles" was apparently fairly common in the early days of the Semite tribes, although the Patriarchs later eliminated this custom, along with the Goddess, as the Hebrew deity became exclusively male.

I reflected that a Garden represents a "Covenant"  between human, animal, plant, soil, air, rain, water.......A successful garden is a harmonious Ecosystem.  A garden thrives through a network of inter-dependant relationships.  Trees communicate  with each other through a vast underground weaving of roots and fungi.  The bees and other pollinators bring new life; the worms, microorganisms and  and other insects  assist in the decay process.  And the birds  assist in distributing seed as well.  Not to mention humans that may plant, sow, admire, and occasionally eat the stray apple or strawberry as well.  It could be said that a Garden is a "Covenant" achieved by many beings, a divine agreement.  THE GARDEN OF THE COVENANT.

As I was leaving my Pilgrimage,  I saw a tiny metallic heart on the ground.  I was going to take it, but then it occured to me that  perhaps someone left it as a kind of offering, and it wasn't right for me to take it.  I put it back on the ground and took a picture.  I was amazed to see this light surrounding it in the photo!  So I took two more - they came out the same!
A Green Heart ………  Perhaps the Earth is Speaking to us  all the time, we’ve just forgotten how to listen.

"To the native Irish, the literal representation of the country was less important than its poetic dimension.  In traditional bardic culture,  every place had its legend and its own identity....what endured was an ongoing conversation with the mythic landscape."
R. F. Foster

In so many  areas of the UK  the 21st Century can seem like  just another layer atop a  pentimento  of  a much older landscape.   Of course this is true everywhere, but it seems so much in evidence there.  That "pentimento" is  circular, serpentine, full of  standing  stones, henges, magic wells. and ley lines.   What, as  theologians and  "geologians" for the future,  might we re-cover and  re-invent from it?

With the evolution of monotheism and patriarchal  religions that increasingly removed divinity from Nature and the body, and in the past century, the rise of industrialization, we have looked at the world  from a "users" point of view.  Renunciate  religions have de-sacralized earthly experience, further complicating our crisis.   Yet every early culture  has insisted that nature is full of intelligence.    Contemporary Gaia Theory proposes that the Earth is a living, self-regulating organism, responsive and evolving.  If one is sympathetic to Gaia Theory, and the innate intelligence of ecosystems,  it follows that everything living  is responsive and conversant in some way, visible and invisible.

We need to learn to "speak with the Earth" again, not in some  abstract way, but intimately, beneath our well-rooted feet, in our creative hands entwined and webbed among a  great planetary collaboration. The  "Covenant" of the Garden.
How do we regain our  niche in that  great “Covenant”?   I believe  one answer  is  “re-mything” .  Myth is, and always has been, a way for human beings to become intimate and conversant with what is vast, deep, and mysterious. Our experience changes when Place becomes "you" or "Thou" instead of "it".    As Pagans  we are uniquely able to address that question.  In the past, "Nature" was  a relationship with Deity, a relationship  within which cultures, individuals and religions  were profoundly embedded as story and living metaphor.  Cooperation and respect  was essential for well-being.
And some places were places of special power, places of pilgrimage. 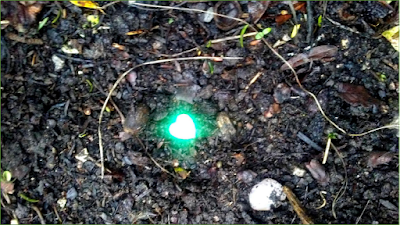