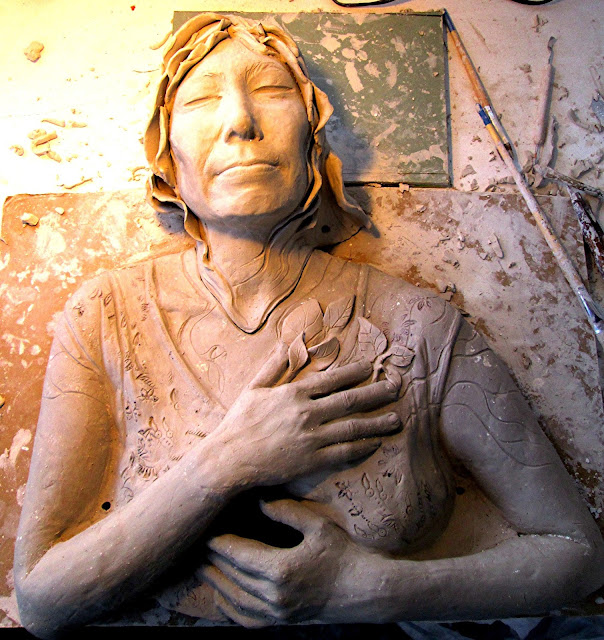 I've made a number of sculptures dedicated to Quan Yin *** and this is the most ambitious one in progress. Quan Yin, the manifestation of Divine Compassion throughout Chinese Buddhism, represents the Bodhissatva - the Great Being who "hears the cries of the world" and returns, again and again, to aid the suffering of the world.  She is often shown, like Tara of Tibet, with many arms, and has been called "thousand armed Quan Yin"....the arms being the many ways she can help and assist those in need.

I don't know why I have felt the need to create so many Quan Yin images, exactly.  I have felt so much this past year the hardening of hearts, division, anger, and mean spiritedness in my country, and have become quite political with the rise the far right agenda and the election of Trump.  As above, so below - in the process I have seen a lot of anger and division coming out of me as well, not all of it manifesting in a good or wise way, and I do not feel in balance these days.  So making masks, making art about Quan Yin (and I am also making a painting about the Archangel Micheal), whether I realize it or not consciously, is an act of invocation.  For the world, but most especially for myself, the lack of compassion and understanding that I find in myself as well as in the world these days. 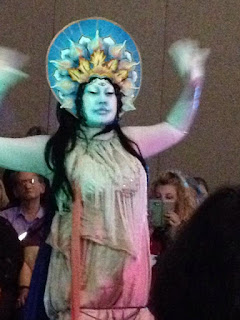 As I love to tell my students, but don't always remember myself.........art making can be a great act of invocation, a great act of healing, an act of magic if you will.  When my model and I were working on the sculpture above, we both felt a kind of light in the room, a yellow, calm, serene light/sensation.  The Goddess was with us as we invoked Her through our creative process.  And it really doesn't matter if you even "believe" in the Goddess Quan Yin.   I'm not sure that "believing" is anywhere near as important as simply wanting help, wanting guidance, opening the heart.  I don't "believe" the Divine Ones care what we call them or what form we give them.  But making art can thus be an act for us of devotion and spiritual practice or transformation.  The art object, finished, becomes an icon, a talisman to remind us.
I wanted to make a Quan Yin that, instead of the idealized and beautiful, but iconic, representations, looks like a real woman in the real world of today -  Bodhisattva walking among us, working among us, hearing and responding to the pain of the world, bringing healing and love.  And not a beautiful young woman either, idealized, but a woman in her middle years, reflecting the experience that comes with embodiment. 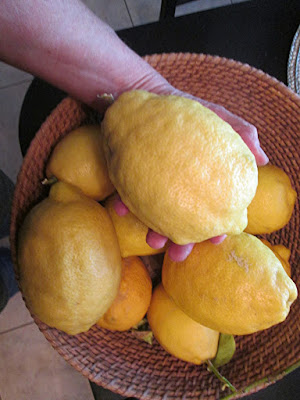 And I had to throw in a photo of the gifts of my friend, my lemon tree.  Giant lemons!  I don't go Wassailing around the lemon and lime trees, but I do make a point of thanking the tree when I harvest the lemons around this time of year.  Perhaps I should Wassail too!  Certainly I am ever reminded of the generosity of the World, the friendship of the garden that so graciously gives us these gifts. 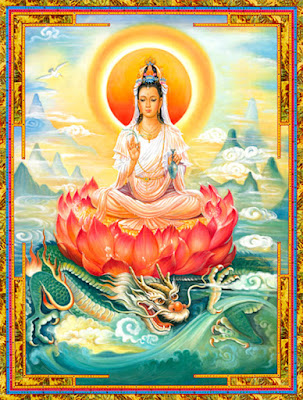 The Bodhisattva of Great Compassion

The Sanskrit name "Avalokiteshvara" means "the lord who looks upon the world with compassion".  Translated into Chinese, the name is "Kuan Shih Yin"or Quan Yin.

Kuan: observe
Shih: the world / the region of sufferers
Yin: all the sounds of the world, in particular, the crying sounds of beings, verbal or mental, seeking help

In short, he can appear as a monk, a nun, or a normal person like you and me. The purpose of such transformations is to make people feel close to him and willing to listen to his words.

In her hands, Kuan Yin may hold a willow branch, a vase with water or occasionally, a lotus flower.  The willow branch is used to heal people's illnesses or bring fulfillment to their requests.  The water ( the dew of compassion) has the quality of removing suffering, purifying the defilement of our body, speech and mind, and lengthening life.

Sometimes, he is represented with one head and 4 arms. This is the Four-Armed Avalokiteshvara, worshipped by all Tibetans as "Chenrezig", the Holder of the White Lotus. It is in the male form which has two hands in the praying gesture while the other two hands hold his symbols, the Crystal Rosary and the Lotus Flower.

There is a sacred place for the worship of Kuan Yin in China - the Putuo Mountain. It is actually an island located near the city of Ningpo, in Zhejiang Province. There are many stories of Kuan Yin's miraculous appearances at Putuo Mountain.

This is such a beautiful Quan Yin... I do think making art is an invocation, especially when your heart and soul's longing is inside the work, as it clearly is here.

Wow, your sculpture is awesome, Lauren. How long does a piece like this take you to complete?!

Thanks so much to both of you.
This may take a while to finish, because it has to go through several firings, and I also plan on making mosaic pieces as a frame for it, and then it will have to be mounted as a mosaic....so a while.............