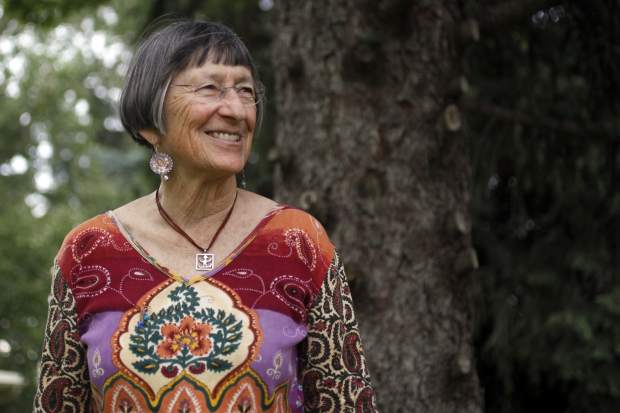 I was very saddened to learn of the passing of Lydia Ruyle, creator of the Goddess Banners that have adorned and sanctified to the Great Mother so many places where people have gathered in Her honor.  Lydia was ever generous with her gifts, and shared her work freely with all, as well as being so encouraging to me personally.  She will be enormously missed by the Goddess community.

May all the Goddesses of her banners surround her with love and blessings, and may she rest in their arms and be renewed. Lydia Ruyle died Saturday morning after being diagnosed in February with terminal brain cancer. A memorial service is scheduled for 11 a.m. Thursday at First Congregational Church, 2101 16th St. in Greeley.  World-renowned traveler, educator and artist Lydia Ruyle has died at her family’s farm in Alles Acres.

The lifetime Greeley resident was a wife, mother of three and a grandmother. She leaves behind quite a legacy as evidenced by the family members, longtime friends and admirers who hosted a party in her honor Feb. 20 at Zoe’s Cafe — shortly after she learned of her cancer diagnosis. Ruyle said at the time she didn’t want the party to happen after her death. She wanted to be there to celebrate life with those closest to her.

Ruyle touched countless people during her lifetime. In the 1970s, when she was elected to the Greeley-Evans School District 6 board, Ruyle fought to add art classes to the curriculum and won. It was about that same time she began painting,

In April 2013, Ruyle received the Century of Scholars Lifetime Achievement Award at the graduate school’s 100 Year Commemorative Celebration. She also taught art at UNC. Given her influence in spreading goddess art locally, the college dedicated a room — The Lydia Ruyle Room of Women’s Art — in her honor.

But it is through her depictions of goddess figures on Nylon banners for which Ruyle is best known. During the early days when she began focusing on goddess works, Ruyle would visit holy sites in England. Over the next several decades, more than 200 women would join her on spiritual journeys to Britain, Turkey, France, Germany, Greece, Italy, Sicily, Malta, the Czech Republic, Russia, Mexico, Peru, the Himalayas, Hawaii and the southwestern United States.

Beautiful work! Now she's probably creating more work on the other side.