In 1999, artist Lauren Raine was commissioned to create 30 leather masks that each reflected the spirit of a different Goddess from around the world. Earlier that same year, she had a dream during which she saw “a long line of Goddesses in all colors, in beautiful costumes.” Then, as if by magic, Raine was presented with a commission to create the series of masks to be used in Reclaiming’s 20th anniversary Spiral Dance in San Francisco.
On her newly updated blog, Raine wrote, “Masks in traditional societies are viewed as liminal tools, as vessels for the sacred powers. With a mask it is believed the Gods and Goddesses can visit, tell their stories, give their blessings, heal or even give prophecy.”
Although the commission was the beginning of her “Masks of the Goddess” project, Raine’s interest in mask making began years before. She said, “My first Goddess mask was Kali … It was a time in my life when there was just so much I had to get rid of, so much maturation I needed to do, so many old patterns and ways of being I needed to get beyond in order to evolve. In retrospect, I think I made the mask of Kali as my own kind of invocation, my call for help from the One who helps us to slay the demons of the mind, to cut away that which has to go.”

When Reclaiming commissioned the masks, Raine welcomed the challenge, saying “I wanted to create them as contemporary temple masks to be used to invoke and re-claim the feminine faces of God.” In the end, the 1999 Spiral Dance used 20 of Raine’s masks for a 3 minute long Goddess invocation.
One of the mask wearers and supporters of the mask project was Aline O’Brien, more commonly known as M. Macha Nightmare. During the Spiral Dance, she wore the Morrigan mask. In 2007 blog post, O’Brien, remembered, “[This was] the baddest-ass Morrígan you ever hope to encounter. Even my friend Urania who helped me put it on was afraid once it was in place … I reddened my palms and displayed them as the Washer at the Ford in the processions.”
After the Reclaiming event was over, O’Brien felt disappointed with the presentation. Although she was personally “inspired by the masks,” she felt that they were underused and “not appreciated.”
With that in mind, O’Brien set out the design her own theatrical ritual that would emphasize Raine’s art, focus on the masks and embody the spirit of the various Goddesses. With the help of Mary Kay Landon, she wrote a script and an innovative ritual structure that focused solely on the Goddesses and the masks.
Then, in February 2000 at PantheaCon, O’Brien had the first opportunity to present her mask ritual, which she named Goddesses Alive! She found volunteers to assist with the both the staging and the various aspects of the performance, which included song, music, readings and dance. The brochure read:
Goddesses Alive! A processional and experiential ritual of masked, embodied goddesses to bring a re-awareness of the Goddess into current Pagan practices. We encounter the goddess embodied by 13 priestesses wearing stunning leather goddess masks created by Lauren Raine
O’Brien told The Wild Hunt that she chose 13 masks for the project, specifically those that would be the most recognizable to her audience. These included Artemis, Hecate, Bridget, Isis, Spiderwoman, Guadalupe, White Tara, Amateratsu, Inanna, Oshun, Sedna, Pele and Kali. Despite the limited budget and time, the ritual was a success. 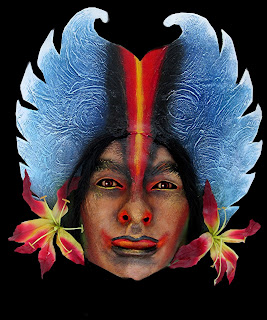 Later that year, Goddesses Alive! was staged for a second time. With support from the New College of California and the Lilith Institute, O’Brien produced the ritual in a dance studio the following December. Once again, she had no budget but the performance was a success. Live music and a chorus of 5 people accompanied the words and movements of the Goddessess. It was attended by around 100 people. Looking back, O’Brien said, “I loved it.”
Despite the success of both performances, O’Brien had no idea if she would ever have the opportunity, time, energy or money to ever do the project again. The Goddesses Alive! script was filed away. The experience was left only to memory with no photos or video recordings ever taken.
Although Raine was not actively involved in either of the Goddesses Alive! performances, she said, “[O’Brien] activated the masks. She created a beautiful, and effective, sacred container for a community to use the masks, and ritual theatre, allowing each participant to evolve them in her or his own way. I think she would be happy to know that her vision has kept going.”
After O’Brien’s rituals in 2000, the masks were used again many times over in other theatrical performances throughout the U.S. Raine even expanded her collection, including elemental masks and other Goddesses. On her blog, she wrote, “I’ve been privileged to share my work with dancers, ritualists, playwrights, storytellers, priestesses, activists, and students bringing the Goddesses into the world in many ways. No artist could ask for more.” Raine created a compilation video of some of that theatrical work:
In addition to using the masks in performance, Raine also began selling them as art pieces. When thinking back on all the many masks created over the past 17 years, Raine said, “The affinity with certain masks changes as I change, but … my favorite masks concern Grandmother Spider Woman, my guide. She always seems to be in the background, the hand at the heart of the great Web.”
Over that same period of time, O’Brien never forgot her own dream of re-staging her very uniqueGoddesses Alive! ritual. Then, in 2014 when the Parliament for the World Religions sent out a call for presentations, Raine and O’Brien both had the same idea: let’s bring back Goddesses Alive! And, to their delight, the presentation was accepted. O’Brien said, “I was blown away.” She never really thought that she’d get a chance to do it all again.
With experience both as a ritualist and as a interfaith representative, O’Brien had the know-how and skill to adapt her otherwise Pagan-focused script for a broader audience. When asked about the adaptation, she admitted that “not much really had changed.” The biggest difference is the actual room size. The original ritual was designed for an inclusive theater-in-the round with only 100 audience members. The new script allows for the same set up but within a large ballroom and for an audience of over 300.
In addition, O’Brien selected new Goddesses based on mask availability and also to better reflect global diversity. She chose the following 13 masks: Hecate, Sedna, Brigit, Isis, Guadalupe, White Tara, Amateratsu Omikami, Inanna, Oshun, Kali, Pele, Pachamama and White Buffalo Calf Woman.
As Raine went to work on prepping the performance masks and, in some cases, creating new ones, O’Brien dusted off the old script and began recruiting performers and a tech crew. By summer 2015, she had her team and planning began. Jeffrey Albaugh signed on as the stage manager. When asked about the upcoming performance he said:
It is difficult and to serve as stage manager for an event like this, where all the performers are coming from so far away, and with no time for rehearsal. It puts an onus on me to make sure the production goes off without a hitch, and is as close as possible to Macha’s vision. However, with this kind of production, focused on movement, sound, voice and using Lauren’s brilliant masks, I think there is a high possibility of real magic occurring during the performance. The numinous will hopefully break through.
As Albaugh notes, the performers and crew herald from all over the world and from many different backgrounds. Cherry Hill Seminary Director Holli Emore will be wearing the Isis mask. She said, “The rich pageantry of Goddesses Alive! is sure to stir people on a level far deeper than cerebral, the emotional place where we become imprinted with life-giving ideas. I feel that years from now we will all look back on this performance as a piece of our collective Pagan history and I’m very proud that I will have a small part in that.”
Emore will be joined by Anna Korn, Jo Carson, Rowan Liles, Áine Anderson, Mana Youngbear, Faelind, Wendy Griffin, Diana Kampert, Maggie Beaumont, Eileen Dev Macholl, Jerrie Hildebrand and myself, Heather Greene.
Rev. HPs. Gypsy Ravish volunteered to be one of the singers. She said, “I am honored to add my voice to this divine Sisterhood.” Other musical performers and script readers include Vivianne Crowley, Celia Farran, Lauren Raine, Rowan Fairgrove, Gypsy Ravish, Robin Miller, Jenn Vallely, Ruth Barrett and Aline O’Brien.
Led by Albaugh, the crew is equally diverse, with everyone coming together to make this single event happen. Mary Kay Landon, who helped O’Brien revise the script, said

“Working on this production–and watching it evolve over the years–has given me a unique opportunity to research goddesses from across the world and, as I did so, to enter into relationship with them as we, together, created their evocations. What a privilege!”

When asked what Goddesses Alive! will offer a global religious audience, O’Brien said that she believes Pagans have “a deep appreciation of the art and design of ritual” and that is “one thing that Pagans bring to the interfaith table.” She explained that we have a “freedom of design” that is often lacking in other religious traditions. “We bring a freshness … and willingness to change.” And she hopes that this ritual performance will bring about an appreciation for that creativity and flexibility.
Goddessess Alive! was designed to be participatory ritual theater. The music, the singing, the readings and the Goddesses will move from behind the audience and through the audience. This technique serves to surrounded viewers in the full theatrical experience, and O’Brien hopes it helps to “open their minds to perceiving the divine” in new ways and to respecting “non-traditional, non-Abrahamic religious traditions.”
For Pagans that attend and others who are more familiar with a similar ritual performance, O’Brien hopes the experience will “demonstrate that the we have something to offer [the interfaith community] that maybe was unexpected.”
Ultimately, O’Brien would like Goddesses Alive! to be “consciousness raiser” for all who attend – Pagans and non-Pagans alike, and that everyone “leaves the room with a sense of community.”
The Goddesses Alive! ritual performance, which is being dedicated to the memory of Sparky T. Rabbit and Deborah Ann Light, will be held at the Parliament of the World Religions Sunday, Oct. 18 at 1:45 p.m. in Salt Lake City. Currently, the production team is still looking for volunteers to film and photograph the event.
Heather Greene
Heather is a freelance writer and journalist, living in the Deep South. She has worked with Lady Liberty League and has formerly served as Public Information Officer for Dogwood Local Council and Covenant of the Goddess. Heather's work has been published in Circle Magazine and elsewhere. She has a masters degree in Film Theory, Criticism and History with a background in the performing and visual arts. 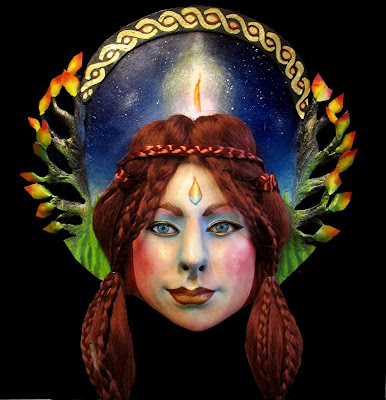 This is absolutely wonderful <3 I am excited to see that the masks are going to be used in ritual/performance. I cannot wait to see the video and pictures. I have been getting my own costume ready to accompany my own Fae Mask. I anxiously awaiting the Samhain celebration at Brushwood to put it to practice! Blessed Be <3

I would love to see one of these performances!