2012 Reflections: "Stand Still for the Apocalypse" 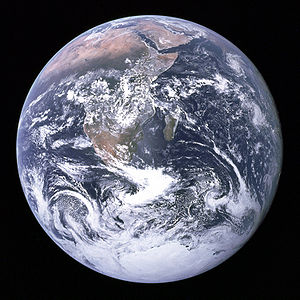 "Humans must immediately  implement a series of radical measures to halt carbon emissions or prepare for the collapse of entire ecosystems and the displacement, suffering and death of hundreds of millions of the globe's inhabitants, according to a report commissioned by the World Bank. The continued failure to respond aggressively to climate change, the report warns, will mean that the planet will inevitably warm by at least 4 degrees Celsius (7.2 degrees Fahrenheit) by the end of the century, ushering in an apocalypse.

The 84-page document,"Turn Down the Heat: Why a 4°C Warmer World  Must Be Avoided," was written for the World Bank by the Potsdam  Institute for Climate Impact Research and Climate Analytics and  published last week. The picture it paints of a world convulsed by  rising temperatures is a mixture of mass chaos, systems collapse and  medical suffering like that of the worst of the Black Plague, which  in the 14th century killed 30 to 60 percent of Europe's population.  The report came just in time for the 2012  United Nations Conference on Climate Change in Doha, Qatar."

The U.N. Conference on Climate Change is occurring as I write, and I feel urgently the need to think about the article above from many perspectives.  The Winter Solstice of 2012 is almost upon us, and I've been thinking about what this metaphor actually means.   (And if the world ends  in a little less than a month, I'll learn, if  only briefly, to be more literal and less metaphorical about everything).

But if the world doesn't end with a polar shift, or a vast meteorite,  on the 21st, it does not mean that the prophecy is not true.  Nor does it mean that the metaphor of Dawn and a New Age is not without truth and possibility.  They say that the truth can set us free, and enable us to begin to address the problems, and potentials, of the future. But right now, we're a civilization asleep at the wheel indeed.  Denial is not a strong enough word for the  negligence.  And that Dawn will arise, if it arises, from chaos and a great deal of suffering and loss.

Spider Woman is the creatrix/midwife who, in Hopi prophecy (and the Mayan Calendar and the Hopi Calendar are related) led a small number of people through the kiva (which could be seen as a birth canal) into each of the next worlds.  In some variations of the Pueblo creation myth, the last world ended with a great flood that sank the continents, and Spider Woman taught the few people who emerged into the 4th world (our world) to make boats to survive.**  At all accounts, I believe She has come when She was needed, to teach us the lessons of the great Web of Life, the Unity of all life.  To cast us a shining line.  And now the 4th World is about to end........I do not believe She has abandoned us now. But we must listen and act.
I grew up with the Apocalypse, even as I watched Neil Armstrong go to the moon, and the advent of the Computer Age. I was one of those kids that hid under their desks in the "event of nuclear war", and my father kept a closet full of canned beans and peaches, just in case.  In Berkeley we talked about zero population growth and recycled our paper bags and invented "bulk" foods at the Co-op.  We wanted to save the redwoods, the prairie dogs and spotted owls, to breath clean air.   But no one could have imagined that we could face this.  No one.


The article linked above by Pulitzer prize winning journalist and author Chris Hedges is horrifying.  I think everyone should read it, just as everyone should see "An Inconvenient Truth", which by comparison, is quite polite. I think the time to be polite is over.  If  people have children or grandchildren, and have made that hopeful investment in the future, it's time to think about what they may face.

"A planet wide temperature rise of 4 degrees C—and the report notes that the tepidness of the emission pledges and commitments of the United Nations Framework Convention on Climate Change will make such an increase almost inevitable—will cause a precipitous drop in crop yields, along with the loss of many fish species, resulting in widespread hunger and starvation. Hundreds of millions of people will be forced to abandon their homes in coastal areas and on islands that will be submerged as the sea rises. There will be an explosion in diseases such as malaria, cholera and dengue fever. Devastating heat waves and droughts, as well as floods, especially in the tropics, will render parts of the Earth uninhabitable. The rain forest covering the Amazon basin will disappear. Coral reefs will vanish. Numerous animal and plant species, many of which are vital to sustaining human populations, will become extinct. Monstrous storms will eradicate biodiversity, along with whole cities and communities. And as these extreme events begin to occur simultaneously in different regions of the world, the report finds, there will be “unprecedented stresses on human systems.” Global agricultural production will eventually not be able to compensate. Health and emergency systems, as well as institutions designed to maintain social cohesion and law and order, will crumble. The world’s poor, at first, will suffer the most. But we all will succumb in the end to the folly and hubris of the Industrial Age. And yet, we do nothing."

I'm not the first person to say it, but it needs to be said again and again, and be a required class and discussion in every school.  How can we teach the young geometry and literature, and leave them unprepared in every way for the reality of ecological disaster?  It's not a nice theoretical problem for them, it's their future.  Our civilization, which is now global, which affords us such unprecedented wealth, food, longevity, and novelty....is not sustainable.  We cannot evolve to survive the technological age unless we can evolve spiritually to meet the challenge, and we're, according to some, plain out of time.

A corporatocracy and the bottom line is not a fit, ethical, or visionary leader, and yet, that is what, essentially, we have rendered our power over to.  Our civilization is not sustainable.  Not because of wall street, or outsourcing, or devaluation of the dollar or the euro.  It's not sustainable because the polar ice caps are melting, and the snows of Kilimanjaro are almost gone, and we continue to burn coal.  Because too many life forms that weave the web of ecosystems are rapidly becoming extinct, and the Great Coral Reef is dying, and no one can imagine getting the kids to school without an SUV.  And because the environment wasn't even in the presidential debates.

How does one, really, come to grips with this?   There are many who are trying, who offer hopeful seeds.  How can we break the "sound of silence", wake each other up and demand justice, not only human justice, but for all living beings, for the great, brilliant, blue planet that is more than our home, but our life and our mother and our own being.  For Gaia.............

**"Taiowa sent Spider Woman to talk to the people who still carried the Creator’s song in their hearts. She taught them how to build large boats out of reeds. This, they did, and when their boats were sealed, the waters began to flood the world. The noise of the rushing waters was incredible.  Large continents sunk and broke apart into small islands. Incredible rains fell. Then it stopped, and there was silence. The reed boats drifted the people ove r t h e s i l e n t waters for a long time.  When their boats finally stopped on a new coastline, the people walked onto the dry lands for the first time."

*** This morning I went to work on a shower I'm tiling in a trailor.  The tiles are in a box on a table outside, and seemingly hovering above the tiles in the box was a seed, the kind that you see drift by in a good breeze.  I was amazed that it stayed right there, until I realized it was suspended by a single transparent spider thread.  What a lovely metaphor........for me, for all.  To be the seeds, suspended and sustained by the Threads of Tse Che Nako.
Posted by Lauren Raine at 7:20 PM

I am ever grateful that you share your wisdom, heart and life with us.