I wanted to share the unbelievable mosaic art of Ginny Moss Rothwell, who is also a neighbor of mine, living in the "poet's corner" area of Tucson.  I went  to her house recently to view her paintings done in pieced tile and glass,  and came away not only amazed at the  beauty, and very unique craft  of her work, but also the conversation we had about orbs.  Ginny has photographed thousands of orbs

for years, and like the friendship she has with the  birds and animals that live in her back yard (and often visit her art as well), I can say that Ginny has a friendly relationship with  many "invisible collaborators" as well.  Asking for  colors in some of her "orb photos" she has been able to show photos of orbs that appear in various colors - violet, blue, green or red.

In fact, there's so much material she kindly gave me permission to share on the subject, that I need to break this post into two sections, one to share her artwork, and the next will be about the orb photographs. 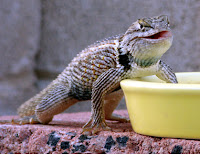 This mosaic, like "Quan Yin and the Dragon King" below, is the Goddess of Compassion, Quan Yin, who is also related to Tara in Tibetan Buddhism.  In the mosaic below, based on traditional sacred imagery, Quan Yin is with the Dragon, as she is also above, portrayed as a modern woman.  I love the orbs that occur throughout the works as well, the invisible presences and energies.  Here's Marco,  the model for the Dragon King, another one of Ginny's friends who has his own lizard apartment complex in the back yard. 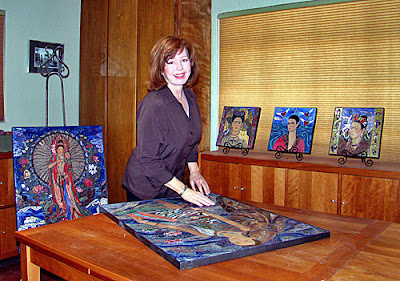 Here's Ginny at work in her studio, and below a wonderful piece dedicated to Frieda Kahlo - I love the milagros that she uses to frame the work.  For anyone not familiar, "milagros" (I'm used to seeing them in silver, and identified with specific parts of the body, such as the heart, or foot, or hand, etc.)  are religious charms that are traditionally used for healing purposes in Mexico,  They are often attached to altars, shrines, and left as a petition for healing in places of worship, and can be purchased in churches  or from street vendors. 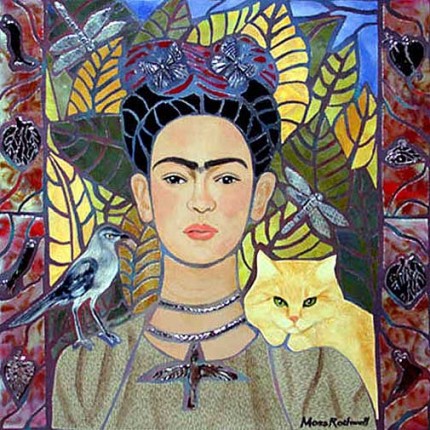 This portrait of Frieda includes Chopra, Ginny's friend and model who happens to be a mockingbird.  I once had a mockingbird friend named Mozart, but I suspect Chopra is much more philosophically inclined than he was.

Stunning art work!! So rich with color and texture and design.

just beautiful. i wonder what material she makes the mosaic from?

very hard for me to comment on your blog due to the "prove you are not a robot" thing. My browser will not show me the letters i have to type.

this time I will do the listening thing where I have to "catch" the five words they say and type them in. but most often, though i would like to reflect on your interesting posts, i am too lazy to do this listening thing. Just so you know.

how strange Suki, I must try to see what this deal is to post comments. Thanks so much for coming to visit!